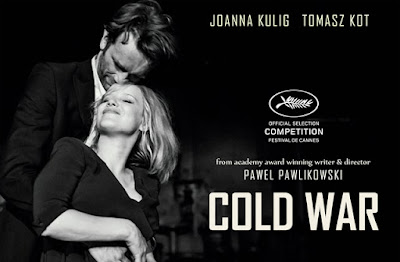 "Don't despair Zula. Whatever will be, will be."

I don’t want to cast an entire genre in a certain light as if there is anything inherently bad about it, especially since that is an abysmal way to go about experiencing movies. But historical romantic epics rarely interest me on a transcendent level. Again I must stress I do not hold any internal bias against them, but I do have a certain scepticism to a film setting a sweeping romance story that will inevitably end either tragically or sentimentally that ultimately seems to have been placed in a certain historical setting for purely aesthetic reasons. It’s just me personal taste.

Set against the backdrop of Europe in the 1950s, as the continent is gripped by the cold war, a musical director named Wiktor Warski (Tomasz Kot) is set the task of assembling a music troupe to boost the Soviet regime’s artistic credibility whilst also furthering the propaganda machine. One of the troupe members is Zuzanna Lichon (Joanna Kulig), a young singer. Their bond with each other is set to grow and change due to both personal and highly political reasons.

Perhaps what irks me about historical romantic epics is their obsessiveness with details, or rather an obsession with the wrong details. The most lavish attention is given to the most surface level details when it comes to the setting, and the characters themselves risk feeling just as decorative as the props. In ‘Cold War’ writer/director Pawel Pawlikowski avoids that tendency by crafting a film that is light on details and heavy on emotion. You do not feel the historical setting of ‘Cold War’ through an indulgence of costumes or architecture, but through the oppressive atmosphere the movie creates. Every show makes the characters feel small within the frame, mirroring their own insignificance in the face of this wider global struggle.

However that is not to say ‘Cold War’ is without its technical complexities. The framing is constrictive and almost claustrophobic in how it shrinks the characters, but at the same time every shot has a sense of depth to it for how Pawlikowski chooses to stage it. He uses reflections and distortions to experiment with the staging of shots and visually stimulate the audience through nothing more than a flourish of character placement. There are single frames within this film that carry more visual complexity than the entire span of other films from this year.

Just as the imagery of Pawlikowski’s film features a contradiction of terms in how it is simultaneously sparse on details whilst being richly complex, so does the narrative. In broad terms the plot concerns two people falling in and out of love with each other over the course of a decade, and several details of that story seem to be deliberately omitted. ‘Cold War’ does not present the viewer with a coherent love story that can be traced through every cognitive action. It instead becomes concerned with the broader emotional weight of how their relationship develops. One could accuse the film of being overly distant or frustratingly abstract, but by neglecting the story beats that would function as dramatic high points in most other movies, ‘Cold War’ paints a much more striking and intimate portrait. 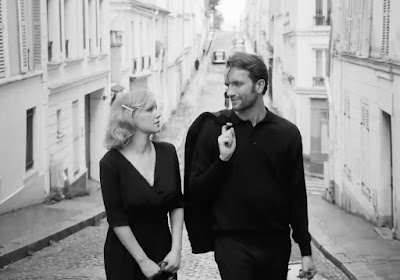 In many ways the film functions as a memory would. The specific details of why these people are brought together ultimately become irrelevant next to the greater emotional weight of their relationship. The circumstances that bring them together or tear them apart are not worth conveying as far as Pawlikowski is concerned. What matters are the visceral and passionate beats felt by the characters when they are together or apart. It means as an audience member you are acutely aware of the distance between them, or the intimacy of their unison.

None of this is to say that ‘Cold War’ is not also concerned with the relevancy of its own social context. One could read the lack of detailed identities given to the main characters as a statement on the ways people living under the oppressive regimes of mid-20th century eastern Europe had to hide their own identities. One could comment on the film’s bleak monochromatic tone and repressive atmosphere. You could even point to the background observations the film makes regarding the music Wiktor and Zuzanna changes over time. From traditional communist anthems to the freestyle jazz and pop music that seeps in, Pawlikowski never misses a chance to evoke an emotional response through nothing more than a music cue.

But for a film that uses music so effectively to convey a story, ‘Cold War’ is just as remarkable for how it uses silence. It is content to revel in the quiet moments that define this relationship, moments that seem beyond language. It lets the collective emotional weight of the narrative speak for itself, trusting its lead actors to convey the details of the characters emotional state through the subtlest of expressions.

I worry that this review will be little more than a series of contradictory sentiments. I have praised ‘Cold War’ for being both sweeping and detailed, intimate yet sparse, simple yet complex. None of this even speaks to how beautifully structured the movie is so as to allow these seemingly unconnected scenes to build upon one another, whilst traversing years in such a way that never leaves the audience lost in where the characters are at in their relationship. At the risk of adding another contradiction to this review, I was both surprised and validated to hear that the film was based loosely on Pawlikowski’s own parents. It is a story that feels as personal as cinema can be, whilst also remaining utterly ageless.

With such confident command of his craft, ‘Pawlikowski’s romantic epic is one whose narration and narrative work in perfect tandem to tell an intimate and thematically rich story.