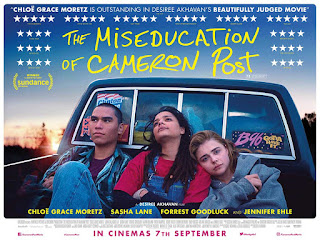 "I'm tired of feeling disgusted with myself."

It is interesting how we label certain movies as “disturbing” and what exactly constitutes those disturbing aspects of said movie. We often associate it with the pure reaction of seeing something that unnerves us on a visceral level, which most often comes down to physical mutilation or act of violence. However there is something to be said for the subtler ways movies can disturb us, how certain subjects and practises seem so alien and absurd that it is not until we truly dwell on them and witness them in detail that the horror emerges.

After being caught in a sexual encounter with another young girl, Cameron Post (Chloe Grace Moretz) is sent by her devoutly Christian aunt to an institution called God’s Promise, a centre that offers “gay conversion therapy”. Soon Cameron finds herself bonding with the other teenagers in the establishment, each one of them coming to terms with their own identity and the prejudice surrounding them.

It is both surprising and entirely inevitable that Desiree Akhavan, the director of this film, cites John Hughes as being one of her biggest influences. The gender dynamics and sexual politics of Hughes coming of age movies were often limited to their own era, but his core themes of identity and disenfranchisement have an enduring legacy which is felt keenly in ‘The Miseducation of Cameron Post’. The biggest difference between the two is that where Hughes found humour and optimism in the struggles of his teenagers, Akhavan builds towards a much bleaker and more disturbing picture.

That is not to say ‘The Miseducation of Cameron Post’ is incapable of finding humour in certain places. In fact the first act almost seems to enjoy finding comedy in the measures God’s Promise puts in place and the idiotic details of its procedures. From fear that a boy having long hair will attribute to his sexuality to encouraging the girls not to abbreviate their names for fear of making them more masculine, one can’t help but laugh at the stupidity of such “logic”.

However as the film moves along the sense of entrapment truly sinks in as it dawns upon Cameron and the viewer that a facility like this is only the manifestation of a prejudice that is just as prevalent on the outside world. Certain story beats drive this point home with heart-breaking effect and with each impactful moment Akhavan is skilled amount to utilise a sense of quietness so as to allow the true existential horror of the circumstances to really sink into the viewer. Those circumstances are essentially an institution devoted to pushing self-hatred, one that aims to condition its residents to believe that the hatred and rejection hurled at them is entirely their own doing. 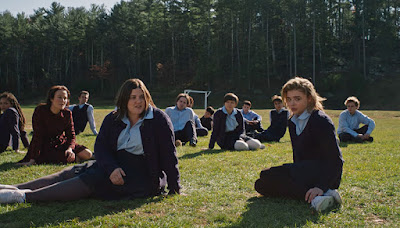 This is overtly stated in a scene near the end of the movie. Institutions like the ones presented in this film are emotionally abusive by design, their whole functionality is to tear down the identity young people are trying to craft for themselves. The scene also reminds the viewer that this emotional abuse was not even considered illegal in the 1990s, and in some parts of the world is Stillwell within the confines of the law. Cameron is asked whether she trusts the councillors, and though she trusts them to perform the most basic level of hospitality, she can’t say they do anything to make her feel safe or secure in who she is. To the contrary their mission is to destroy any faith these young people have in themselves.

This scene also showcases just how brilliant Chloe Grace-Moretz is in this movie. The role of Cameron is a decidedly difficult one that Grace-Moretz navigates excellently. She conveys the maturity and emotional stability Cameron has, because despite her predicament she is confident in her own budding feelings. However the versatility of her performance shines through as she communicates the insecurity and doubt Cameron starts to feel as every peer around her continually insists that there is something wrong with her.

The tone of the movie is a similarly brilliant balancing act, reconciling the ambiguous humour with the underlying tragedy to great effect. The intimate staging and direction by Desiree Akhavan takes note of the small moment of freedom as well as the interpersonal relationships Cameron forms there. It is ironic that being sent to conversion therapy allows Cameron to find other outsider with whom she can bond with and relate to. But as the film moves forward it is hard not to be weighed down by the crushing reality of the situation. In some ways the visual language of Akhavan’s film reminded me of other dramas such as ‘Short Term 12’ and ‘Girl, Interrupted’, both of which deal with young people battling their own demons. But where ‘The Miseducation of Cameron Post’ sets itself apart is to remind the audience that in its world it is the institution housing those young people is not for their benefit, and far from being internal the demons here are very much external.

Disturbing and emotionally provocative yet simultaneously intimate, observant and surprisingly hopeful, ‘The Miseducation of Cameron Post’ is an insightful work of drama.