"There's only room in this band for one hysterical queen."

There are certain films that have me inclined to be more forgiving when it comes to their actual quality. In some cases I’m willing to overlook flaws or shortcomings either due to the sheer entertainment said film offered me or a fondness for the subject matter. However hard I try to overlook both of those factors in most cases there will inevitably be something that manipulates me into liking it more than the sum of its parts would assume. Anyway, are you wondering what I thought of ‘Bohemian Rhapsody’?

In 1970, an Indian-British Parsi college student named Farrokh Bulsara joins a local band named Smile as their new frontman. With the band changing its name to Queen and the frontman changing his name to Freddie Mercury. Soon Queen’s fame skyrockets and the band find themselves on a rollercoaster ride of fame and fortune, just as Mercury begins to question his own personal identity.

If I was looking for an easy comparison to make between ‘Bohemian Rhapsody’ and another film of similar quality in broad thematic strokes then I would draw a parallel between this 2018 film and the 1991 biopic ‘The Doors’. Both are films that attempt to draw too broad a picture of their subjects, distort the historical facts that lean into a more dramatized story, fail to cast their subjects in a new light or dive deep into their own psyches, but are also anchored by a terrific lead performance. They each play like Greatest Hits compilations which celebrate the bands’ success but never dive deep into the substance of what drove them or illuminate them in any meaningful way.

If I were to look for another comparison to make between ‘Bohemian Rhapsody’ and another movie then that would have to be ‘Walk Hard: The Dewey Cox Story’ (which clearly not enough people have seen). Dexter Fletcher’s film indulges in the tropes and trappings of any music biopic that are now so familiar they were being parodied more than a decade ago in the aforementioned ‘Walk Hard’. The broad structure and pace of the movie that involves a young band becoming unlikely successes, falling out under the pressure of their fame only to then reunite for a life changing live performance (during which every significant member of the protagonists life reconciles with them) is about as generic an execution as one could imagine for this kind of story.

It’s understandable why ‘Bohemian Rhapsody’ opted for this structure of storytelling since Queen, while legendary, were not the tumultuous band that would give ample material for a biopic of this nature. I don’t want to come across as if I’m undervaluing Queen as they were one of the most phenomenal music acts of all time. However they were celebrated and adored within their own time as well, with a rostra of hits that have only gained even more popularity since. They never had a huge break up or fallout, merely some hiatuses, and they enjoyed many years of sustained success and popularity. 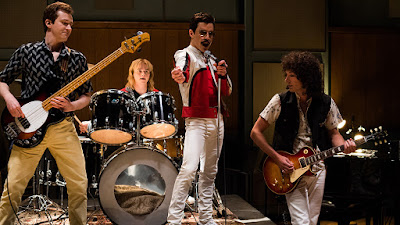 Obviously it goes without saying that the deeper nuances of its subjects would make for compelling drama. But ‘Bohemian Rhapsody’ seems too hesitant to examine those aspects on any meaningful level. Instead it is more content to allow the music of Queen and a conventional story formula to entertain its audience. As much as I would like to pride myself as being above that kind of manipulation, I’m really not. The result is that despite its shortcomings I found myself thoroughly entertained by the film in its momentary state. In fact a few scenes are wonderfully electrifying in how they so acutely capture an infectious sense of energy. They pulsate with the rhythm of Queen’s music and revel in the iconography of a band that, perhaps more than any other, truly deserves to be revelled in.

This all builds up to the final scene which re-enacts Queen’s legendary Live Aid performance. As a momentary feat of filmmaking and storytelling it is a stunning thing to behold. A scene that completely encapsulates the energy, excitement and atmosphere of such an iconic moment in music history. As the songs blast out you feel the weight and power of each one, you sense the hold Mercury had over the thousands of people who were watching live and just as they did, you become utterly hypnotised by his command of his craft.

Except of course in the film it is not actually Mercury but Rami Malek, though you could be forgiven for forgetting that. ‘Bohemian Rhapsody’ truly lives and dies on Rami Malek’s performance which is both towering in its ferocity but also stunningly intimate in its nuance. This is no cheap imitation as Malek goes above and beyond to embody the mannerisms and tiny characteristics that made Mercury the icon he was. His movement and body language tell a story in of themselves, as he seems to demand the attention of every single scene he is in. Perhaps I should be disappointed with ‘Bohemian Rhapsody’ (and to a certain extent I am). Queen were too unique and innovative to deserve such a basic and formulaic telling of their story. But any excuse to revel in their greatness is something I can’t quite resist.

As entertaining and indulgent as it is, ‘Bohemian Rhapsody’ plays it too safe and too secure to live up to the greatness or intrigue of its subject matter.