Bad Times at the El Royale

"It's a game that all starts with a simple choice; which side are you on?"

Drew Godard has been in a somewhat unlucky position for most of his biggest successes. Though I’m sure he would disagree on account of not being a huge egotist who demands credit for everything, I personally find that Godard’s significant input with each project is overlooked. His efficient direction on ‘The Cabin in the Woods’ was overshadowed by Joss Whedon’s inventive screenplay. Then Godard’s own screenplay for ‘The Martian’ was not the recipient of praise like Ridley Scott’s direction of that film was. Hopefully that will not be the case here.

As the writer and director of ‘Bad Times at the El Royale’, this is Godard’s first film that is solely his creation, one that can showcase his own creative scrip executed in his own specific vision. Though Godard’s work has always possessed a flair for ambition, there is something extremely high minded in how his latest project is conceptualised and executed. On the surface it is an entertaining whodunit with several character threads balanced in pleasing tandem. But the more one allows ‘Bad Times at the El Royale’ to linger the more you become aware of how culturally ambitious and socially aware it truly is.

Godard may have set his film within the confines of a rundown hotel involving a handful of characters, but through those elements he paints a broad portrait of an entire era within American culture. When you dwell on what brought each of the characters to the specific place of the El Royale and how that ties them into the greater social trends of the era of history in which the film takes place, it becomes all the more evident that Godard sought to tell a story far larger than just seven individuals.

It might be important to bear that in mind when watching the film because if you insist on viewing it as an intricate character study then the film does fall somewhat flat. The characters are compelling and each are equipped with their own evocative backstory, but few of them really experience an arc or sense of development across the movie. The hyper stylised mystery even made me feel reminiscent of Tarantino’s ‘The Hateful Eight’, with the main difference being the point of focus. Tarantino was obsessed with the individuals of his story, whereas Godard is obsessed with the environments that created his individuals. 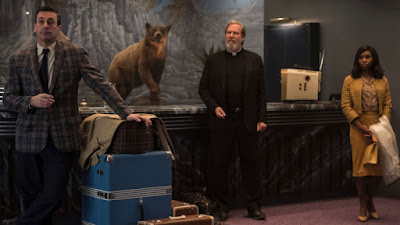 The fact that he is intent on showcasing the wider context around each character means Godard is given the opportunity to showcase his visual dynamism as a filmmaker. Throughout the film he crafts several incredibly evocative and picturesque shots. There really is a lavish indulgence to the look of ‘Bad Times at the El Royale’ which is hard not to soak in. Even as the film itself overstays its welcome with an excessive runtime the visual splendour never falters, with an array of environments to compose some truly breath-taking imagery.

In that sense I can understand how some would criticise the film for being little more than an excuse to string together several impressive set pieces together, in fact that format of the film seems literally purpose built for that structure. But Godard’s script contains enough intrigue to keep these set pieces cohesively involving. Each characters backstory is inserted with impeccable timing and structured so that is rewards the audience for being involved within the films momentary narrative. Though there are many flashbacks they never feel obligatory. In the meantime Godard treats us to some hugely entertaining interactions between his twisted ensemble and some magnificently tense moments of pure cinema.

Another means in which ‘Bad Times at the El Royale’ is a pure showcase is from an acting standpoint. The ensemble cast each fill their respective roles excellently, bringing a level of emotional involvement for the plot to work on a more meaningful level, but also never losing those charismatic snapshots which makes the film simply entertaining beyond measure. To say this film is character driven is an understatement, as it is the characters and their interactions that determine the entirety of the plot. It is difficult to give away precisely why each actor is so brilliant within their specific roles without spoiling the film, so I will simply say that they were all terrific and that Cynthia Erivio was the standout because she is truly exceptional.

With its ambitious storytelling and entertainment factor more than compensating for it’s more flawed aspects, ‘Bad Times at the El Royale’ is an intriguing and invigorating experience.