Steve McQueen is perhaps one of the best working examples of a director who can see the innermost themes of a script and use their directorial prowess to bring those themes right to the forefront, thereby elevating the film as a whole. The inhumanity of ’12 Years a Slave’, the cyclical violence of ‘Hunger’ and the inescapable trauma of ‘Shame’. His ability to elevate strong screenplays into great films is unparalleled, and though on the surface his latest film is a more concept oriented thriller, McQueen is still working at his creative peak.

A police shootout leaves four thieves dead during an explosive armed robbery attempt in Chicago. Their widows, Veronica (Viola Davis), Linda (Michelle Rodriguez), Alice (Elizabeth Debicki) and Belle (Cynthia Erivo), have nothing in common except a debt left behind by their spouses' criminal activities. Hoping to forge a future on their own terms, Veronica joins forces with the other three women to pull off a heist that her husband was planning.

One of ways in which a film like ‘Widows’ would appear to be outside of Steve McQueen’s usual oeuvre is that it seems to be driven more by concept than the deeply human dramas which he had helmed previously, or at least that was what I thought upon approaching his latest effort. Upon watching ‘Widows’ however it becomes very apparent that this is just as much an intimately drawn, character driven story which priorities the humans at the centre of its narrative and focuses keenly on them. By the time the heist comes to fruition at the climax of ‘Widows’ I was so utterly enthralled in the tension of the scene both for the consequences every action would have on the narrative but also for the emotionally fallout it would cause.

To give credit where it is due, before I shower praise on McQueen I also have to commend Gillian Flynn for a truly masterful screenplay. Flynn’s script is one that functions on numerous levels. First and foremost it works as an utterly gripping exercise in the heist genre. It is abundant with twists and turns without becoming overly convoluted. It keeps the stakes and potential consequences of the heist in focus at all times whilst slowly building an intricate and detailed portrait of how the characters will enact their plans. On a broader scale it brilliantly builds tension through the movie’s pacing and structure to allow for the tension wracked finale to play out with perfect clarity, but leaving just enough room for a few final surprises that managed to shock me with every revelation.

But beyond the confines of its genre, what Flynn accomplishes in her script for ‘Widows’ is a deeper exploration of character and theme than many heist movies allow for. Whereas many movies present a motivation for the characters and stop, Flynn gives us an insight into her characters own conflicts with their motives. We see their fears and insecurities, their doubt in their own ability and how those moments of weakness inform their development across the movie. There is also a lot to be said about the wider socio-political themes Flynn weaves into her script. ‘Widows’ is as much a story about the environment that has contributed to the circumstances the characters find themselves in as it is about the people themselves.

Of course, having an ambitious undercurrent that deals with themes of class, economic changes, race, political hierarchy, gender dynamics and abuse would risk overshadowing the central narrative of any movie. That is where McQueen comes into the picture. So many of these ambitious themes are told through a visual motif that it stands as a testament to McQueen’s trust in his audience. He places small details in the language of his visuals that allow any viewer to pick up on the broader scope of what his film is saying, as well as making it all the more rewarding to revisit. 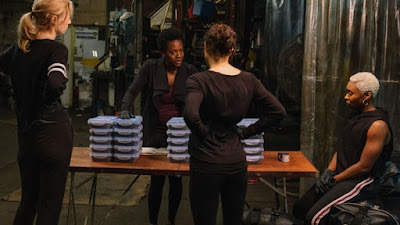 McQueen’s ability to convey an entire miniature narrative through nothing more than his own directorial prowess is astonishing. Scenes are able to exist outside of their basic functionality and transcend the perception of what we think a heist movie to be. Perhaps my favourite moment is a seemingly simple scene that involves two characters talking on a short car ride. What they are saying informs their characters and dynamic, but what McQueen chooses to show is even more valuable. He has the camera remain outside of the car as it drives, focussing not on the conversation but instead the landscape and noting how the slums of Chicago so rapidly turn into pristine mansions. It paints a portrait of a city divided by wealth, with lines so acutely drawn that you can narrow the disparity down to just a few streets away. It’s filmmaking that is so subtle yet so deliberate that it is simply astounding.

As impeccable a job both Flynn and McQueen do of injecting a sense of humanity into the film, it is the performances that really drive the compelling narratives home. Viola Davis, Elizabeth Debicki, Michelle Rodriguez and Cynthia Erivo are all outstanding as the central heist perpetrators. Their determination is always on display, and works alongside their discomfort to make them all the more compelling. They are all unique enough to function as captivating individuals while simultaneously sharing a fascinating dynamic at having been united by this common cause.

Meanwhile the many forces standing in their way are equally fantastic, from Colin Farrell’s sly politician who is bestowed with surprising depth as the film progresses, to Daniel Kaluuya’s sceney chewing magnificence as an unhinged sociopath. When you also have the additions of Liam Neeson, Carrie Coon, Bryan Tyree Henry and Robert Duvall to the cast, all of whom are turning in excellent supporting performances themselves, it really is an ensemble to behold.

‘Widows’ is the kind of thriller than functions on several levels, which makes it enthralling on the first viewing and involving on every subsequent one.