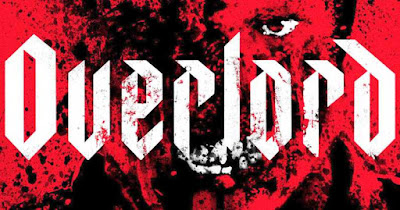 For all the success it’s had in other mediums, it is somewhat surprising that it has taken this long for the concept of Nazi zombies to make its way onto the big screen in this kind of mainstream capacity. What is less surprising is that it comes with the backing of JJ Abrams, who has been using his producer credits to affective use on original and intriguing genre experiments for the best part of a decade now. Having spent so long in the realms of franchises it is interesting to see Abrams’ return to a property with no existing IP, and it will be intriguing to see if he can garner a whole new “mystery box” to indulge in.

On the eve of D-Day, American paratroopers drop behind enemy lines to penetrate the walls of a fortified church and destroy a radio transmitter. As the soldiers approach their target, they soon begin to realize that there's more going on in the Nazi-occupied village than a simple military operation. Making their way to an underground lab, the outnumbered men stumble upon a sinister experiment that forces them into a vicious battle against an army of the undead.

War and horror are genres that can often be thought of in one. Evoking the horror and inhumanity of war is something filmmakers have been striving to do with their cinematic portrayals of conflicts for decades now. But to see a movie with the dressings of a war film populating itself with overt horror elements is an entirely different, but interesting, approach. ‘Overlord’ certainly isn’t fusing horror with war in the same way Francis Ford Coppola or Stanley Kubrick would fuse the violence of combat with existential dread. Instead it brings forth our more explicit fears of being attacked by hordes of the undead (which I won’t lie, is definitely something I’ve contemplated more than mere existential dread).

A movie like ‘Overlord’ lives and dies on its tone. There are no cheap thrills to be found within a self-serious affair that refuses to acknowledge the ridiculousness of an inherently ludicrous concept. At the same time however, too many knowing winks to the audience can dissipate any sense of tension or sincere stakes within the narrative. It’s a delicate line to walk and ‘Overlord’ treads it with excellent care. The film revels in its own high concept outlandishness whilst also wonderfully indulging in the genuine tension of its plot. In many ways it’s somewhat reminiscent of the eary work of John Carpenter, a filmmaker who dealt in eccentric concepts without ever thinking himself above the material.

Perhaps it works because, like Carpenter, Avery finds the humanity amidst a high concept splatter-fest and grounds it through strong characterisation. Part of that is through the performances of the cast, which brings me onto another major link to Carpenter in the form of Wyatt Russell. The son of frequent Carpenter collaborator and living legend Kurt Russell, Wyatt is uncannily like his father in terms of screen presence and serves as the epitome of why ‘Overlord’ works. Russell is charismatic, funny and committed without ever straining himself to achieve any of those things. He transitions from one mood to another effortlessly whilst uniting them as part of a single solid character. He elicits just enough sympathy and humanity for the sincere human moments to feel compelling but exudes in equal measures an infectious swagger which allows you to cheer at the pulpy entertainment value. 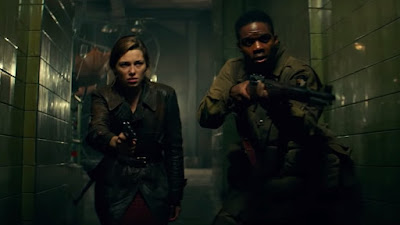 In many ways Avery handles the tone of the overall film in the same manner. ‘Overlord’ is at once bombastic and gory to wonderful effect in how it indulges in the over the top blood soaked thrills whilst also taking itself seriously enough to commit fully to the genre hybrid it represents. It holds enough tension and genuine fright within its set pieces to fulfil its promise of horror whilst also capturing the bombastic energy of a traditional war film. In simple terms the film knows what it is. It trims any fat or excess in favour of simply executing the idealised version of the genre experiment it set out to be.

So it comes as no surprise to say that the film is blunt and simplistic. By no means should you go into ‘Overlord’ expecting any degree of complexity or nuance which in some regards is a shame since the film has the potential to craft a more emotionally subtle narrative. Though that seems in contrast with my praise for the film being appropriately self-aware,  the craft of ‘Overlord’ is strong enough that it inadvertently leaves room open for a deeper exploration of its characters and setting. Despite a phenomenal opening and closing act the film loses some sense of substance in the middle, and the inclusion of some could have helped alleviate the empty space felt between each gory set piece.

As a singular piece of genre experimentation though, ‘Overlord’ is appropriately entertaining and rewarding for what it promises. There may not be any subtext to find but in its place there are some terrific practical effects and thoroughly enjoyable action set pieces which are very clearly laced with the DNA of horror. The plot is fast paced and energetic to a point where it sometimes feels exhausting but on the other hand it’s refreshing to see a movie with this kind of concept obviously placing trust in its audience to keep up with the plot and not talk down to them.

‘Overlord’ doesn’t sell any of its genres short, instead it commits to each one of them with equal enthusiasm and weaves them together in a work of pure pulp enjoyment.