The Other Side of the Wind 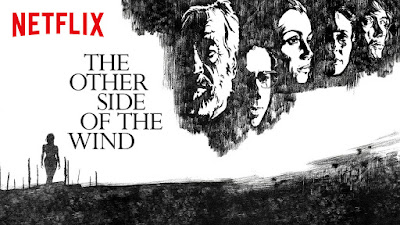 "What he creates he has to wreck, it's a compulsion."

I’m tempted to begin this review with an obligatory “can you believe this is happening” kind of mantra which does seem a tad cliché. However it really is impossible to overstate how monumental it is that Orson Welles’ final dramatic feature, long regarded as one of the best unfinished films ever made, has reached its audience. More than 40 years after Welles first started filming his planned comeback and three decades after his death, ‘The Other Side of the Wind’ has finished its long awaited road to being completed and released.

Returning from a lengthy hiatus in Europe, revered and legendary filmmaker Jake Hannaford (John Huston) struggles to finish his troublesome and unconventional comeback film titled The Other Side of the Wind. In the midst of filming he throws a lavish party to celebrate his 70th birthday where both his life and art are placed under intense scrutiny.

Whenever I review a film I try to place it within the context of what conditions it was made under, as well as what it is trying to achieve. It goes without saying that is a decidedly difficult task when it comes to judging ‘The Other Side of the Wind’. Though this finished version is said to mirror Welles vision as closely as possible, one can never truly know what the auteur planned for his complex character portrait. How much of this project is confined to the filmic landscape of its time and how much is influenced by the legacy that it carries?

For the opening few minutes I was worried that the end result would be more of a Frankenstein like creation than a cohesive film. Those of us who know Welles as the master of patient and atmospheric filmmaking that brought us ‘Citizen Kane’ and ‘Touch of Evil’ may be in for a shocking surprise. The deed focus and long takes of Welles early work is replaced by intense close ups and frenetic editing that fully immerses the viewer into the chaotic battleground which the film industry of the 1970s is rendered as. It’s an incredibly disorienting experience that the viewer must gradually grasp with as the film progresses.

Before you even dig into its narrative, ‘The Other Side of the Wind’ already establishes itself as unlike anything Welles had attempted in his career. His visual versatility is staggering and arguably elevates the late auteur’s talent to a new level of appreciation. Even at this late stage of his career Welles was pushing the boundaries of how cinema could be rendered. It’s intriguing to even ponder how the film would have been welcomed had it been released during his lifetime.

But despite these deviations from Welles’ traditional oeuvre, it is easy to spot the thematic similarities that tie ‘The Other Side of the Wind’ to the rest of his career. The ambition, structure, flair for eccentricity and core character portrait are classically Welles at heart. The protagonist of his last film has much in common with the star of his first. Both are enigmatic men epitomising the conquest of their own industry, but clearly lack that humane connection which could define them as people. The difference comes with how elusively Welles presents Hannaford in comparison to Kane. This snapshot of Hannaford does not provide answers to his longings as Citizen Kane did, instead it examines the way his art conflates and interacts with his life, legacy and momentary status. We only witness Jake Hannaford go about his life for a single evening, and yet we feel as if we have every vital piece of the puzzle that represents him as a person and artist. 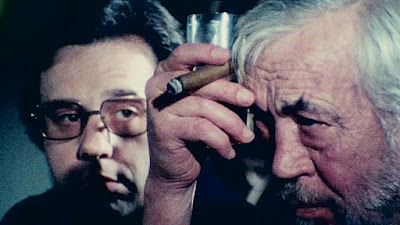 It’s a role that truly allows John Huston to dominate the scenery. The screen legend growls and chews his way into the part of Hannaford with stunning intricacy. There’s a distinct spark of charisma within Huston’s performance that makes Hannaford’s reputation as a creative genius more than believable. At the same time however Huston allows the aged bitterness of his character at this exact moment to greatly inform the character as well. It’s a delicate balancing act that Huston conveys with fine precision, at once mighty and towering in his performance but also never above being broken down by whoever can cut into the core of this complex man.

It would be easy to assume that Hannaford is intended as a reflection of Welles himself, and in many ways that is understandable. Most characters in the film seem to be intended to mirror some prominent member of the 1970s film industry. From Susan Strasberg as a thinly veiled spoof of Pauline Kael to Peter Bogdonavich who does a wonderful job of essentially playing himself. As an upstart director who worships the altar of Hannaford, Bogdonavich has plenty of scenes alongside Huston in which he holds his ground exceptionally well.

In fact just beyond the individuals who are represented in ‘The Other Side of the Wind’ the film as a whole seems to be a biting satire of entire filmic movements. From the avant-garde European cinema that was dominating the global stage in the early 1970s to the auteur driven wave that was about to revolutionise Hollywood. Forty years on we see Welles commenting and dissecting these very movements as they were happening, still ahead of his time.

But to continue the notion of asking whether or not Hannaford is Welles’ self-portrait, it would be an oversimplification to simply say yes. There are unquestionably elements of Welles’ own being thrown into his central character, as there were with almost all of his protagonists. Maybe it was indeed an attempt by Welles to hold up a mirror to his own life, and if that is the case there are tragic levels of self-loathing to be found. But among other things the aging director made it clear he refused to be painted in broad strokes. Hannaford, much like Welles himself, is easy to examine but almost impossible to summarise.

‘The Other Side of the Wind’ is Orson Welles hidden masterpiece, a film of such versatility, biting satire and intimate drama that is showcases a side of Welles that may surprise us all.