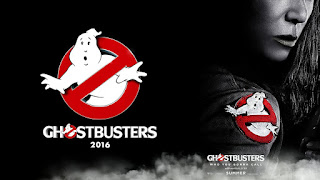 "We have devoted our whole lives to studying the paranormal, now there's sightings all over the city."

So, the film that you are either a deranged feminist if you like or a sexist pig if you hate. This is the movie every critic dreams of writing a review for. So with the most disliked movie trailer in YouTube history as well as any video or article that even dares to say “Maybe it won’t be that bad” earning the maker of said video of article death threats, hate comments and an all-round bad day there is obviously no pressure of any kind when writing a review of ‘Ghostbusters’. Here goes nothing.


A group of scientists intent upon investigating and combating various supernatural entities that are haunting New York City set up an institution to put their theories into practice. Melissa McCarthy, Kate McKinnon, Kristen Wiig and Leslie Jones band together to become the Ghostbusters.


I can immediately say that ‘Ghostbusters’ is not worthy of the mass hate heading it’s way, but before you leave I also have to say that such a statement does not mean I think it is an exceptional movie. I find it hard to believe that in an era where we are seeing terrible remakes/reboots of ‘Total Recall’, ‘Robocop’, ‘Clash of the Titans’, ‘Terminator’, ‘Red Dawn’, ‘The Texas Chainsaw Massacre’, ‘Halloween’, ‘Oldboy’ ‘Teenage Mutant Ninja Turtles’, ‘Transformers’ and ‘Ben Hur’ (yeah remember that, they’re remaking ‘Ben Hur’ later this year) that ‘Ghostbusters’ is the one that everyone thinks is ruining a classic movie (they’ve already remade ‘Psycho’ with Vince Vaughn as the lead, what could be worse than that?).


Even though I love the first ‘Ghostbusters’ I despise the sequel, so I like to think I’m not so blinded by nostalgia for the original cast that I could not go into this one with an open mind. At the end of the day I think this effort sits neatly in between the two, it is nowhere near as great as the original but it is an improvement on ‘Ghostbusters 2’. The best way to describe it is that it’s just another Paul Feig movie, an enjoyable summer comedy that you probably won’t remember by the time his next effort rolls out in 2017.

In many ways the biggest detriment to this reboot of ‘Ghostbusters’ is the fact that it is called ‘Ghostbusters’. It invites comparison to the original and however hard it tries it can’t live up to it. This film doesn’t improve upon the original, nor does it further the concept and nor does it look at the concept from a new perspective. The sad truth is that it has no real reason to exist. Not only that but it fails to hit the same comedic heights as the original, instead of the seamless blend of cynicism, dry faced wit, hilarious banter, physical comedy and straight up silliness of the original we are treated to the usual Feig style of comedy. Again that is not necessarily bad, it’s the same vein as ‘Spy’ or ‘Bridesmaids’ just more tailored towards families. Frankly I’m sure families would enjoy this movie and if it inspires any younger viewers to visit the original then that would be even better.


On a technical level the film is very well made, the sound design, production design and action sequences are all competently constructed. The only thing that worries me are the ghosts themselves who simply look too cartoonish to be menacing or comedic, they don’t look properly integrated with the actors around them and whether it be the composition or the texture but something just seems off, meaning that there automatically feels as if there is a disconnect between the real world and the CGI creations that consistently took me out of the movie.


The four Ghostbusters themselves are serviceable. They lack the finesse and gleeful chemistry of the original foursome but are definitely worth a laugh or two. Wiig, Jones and McCarthy are all fine in their roles, however McKinnon’s character suffered from a few inconsistencies that were too distracting to overlook. I blame that more on the writing than her performance though. However even putting that aside all four women have done better work elsewhere, not to say they are bad here but they don’t quite fulfil their comedic potential in my opinion.


Chris Hemsworth is a great addition at first. His character is fuelled by a one note joke and while it risks wearing thin from a narrative standpoint it is consistently funny. However his character alludes to something that becomes more apparent as the film progresses, namely this. I couldn’t help but notice that every male character in this film is either an idiot, an asshole or a coward. Now I’m sure male centric films have portrayed women in worse ways but I’d criticise it there if I saw it fit so I feel obliged to do the same here. It is not a massive problem nor is it something I would condemn them for but I would have preferred some more variety in the kinds of characters being portrayed as well as bit of depth to them and that goes for both male and female characters.


Not nearly as entertaining as the inevitable internet fall out is will cause.