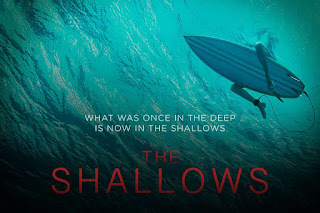 The scale of shark movies is a skewed one. At one end you have ‘Jaws’, Steven Spielberg’s thrilling masterpiece that still stands as one of the greatest motion pictures of all time. Then on the other side you have everything else. From ‘Deep Blue Sea’ to ‘Sharknado’ they do vary in their awfulness but let’s face it, nothing beats ‘Jaws’ and after watching ‘The Shallows’ I’m only further convinced that nothing ever will.


A young surfer (Blake Lively) becomes stranded in the shallows on a rock and is injured by a great white shark in the process. She’s 200 yards away from the shore and could easily reach it by swimming however the shark’s persistent and formidable attacks force her to fight for her life against the monster.


At the very least ‘The Shallows’ is a sign that maybe Hollywood are finally ready to take shark movies seriously again. As opposed to the cheap, so bad they’re good, B-Movies that have come to define the genre (thank you for that Asylum productions, I guess you have to do something while you’re not ripping everyone else off) ‘The Shallows’ does not have any tongue in cheek, self-referential nods and nor does it reduce itself to being a guilty pleasure, it aims high. It aims to be taken as a claustrophobic and contained thriller, and does it work? Well……sort of, not really.


‘The Shallows’ is a simple and sometimes fun action flick that has its moments of tension and terror but it lacks any dramatic heft and cannot sustain those adrenaline fuelled moments for the entirety of the film, or even for a good portion of the film. In fact even though I derided other movies for doing this ‘The Shallows’ could have used a bit of humour because to be fair even ‘Jaws’ had its moments of humour and I know that it can be viewed as highly unfair to compare ‘The Shallows’ to ‘Jaws’ but as I said, it’s a skewed scale.

The problem is that ‘The Shallows’ seems to think it’s much more dramatic than it really is. It assumes its audience is so invested in the main character and her dilemma that we are riveted by flashbacks of her recent familial tragedies and while I appreciate the effort to try and flesh out the character most of it falls somewhat flat, descending into a mess of clichés and contrived emotional hooks. Not only that but I can’t help but wonder if it is somewhat unnecessary, after all we are being chased by a murderous oceanic predator, as Hooper put it “an eating machine”, do we really need any sappy cancer related back story to support that?


In all fairness though I probably would have been even less compelled towards the main character were it not for Blake Lively’s performance as she does a decent job of remaining in such a high state of terror as well as the more intimate emotional moments. But when I say she is decent I mean that she can carry the material in a decent manner and make it sound mostly believable, she brings a good physicality to the role but as for any genuine emotional weight then sadly we are left slightly unsatisfied.


Lively is also the only consistent thing within the film as both its plot, tone and pacing jump around repeatedly, unsure where to settle. As opposed to throwing you right into the action it starts off at a painfully slow pace, set against a rather disconcerting and somewhat comedic tone (with an even more bizarre choice of music for the soundtrack). Certain plot threads are hinted at only to be dropped and never referred to again and  the direction itself is far from the showcase a contained thriller like this should be for a talented director. Jaume Collet-Serra never thoroughly utilises the space around our main character and does not take full advantage of how to use it to create a heightened state of terror. Collet-Serra occasionally tries to display a sense of directorial flair by framing a shot at a weird angle or throwing in a slow motion shot but none of them really serve any purpose other than to remind you that the film even has a director. Moments of tension are only marked out by events within in the plot, never through the score, direction or performances.


Even the limited plot unfolds through clunky expositional dialogue and ham fisted flashbacks. What is even more insulting is just how forgettable it is. Not even in comparison to anything else, just as it is it’s a bland, uninspired and unmemorable film.