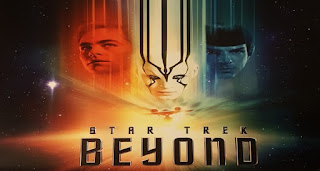 "My dad joined Starfleet because he believed in it, I joined on a dare."

I said a while ago that with 2016 being the 50th anniversary of the ‘Star Trek’ franchise ‘Star Trek Beyond’ needed to be to its own franchise what ‘Skyfall’ was to James Bond. The trailers sank those expectations and Justin Lin’s name plastered over them for a while we were all fearful that this was simply a realisation of ‘Fast and Furious’ in space. But having seen the finished product I am delighted to report that ‘Star Trek Beyond’ is absolutely fantastic.


It is nice when a movie surprises you. Not in its narrative but in terms of its quality and entertainment value because ‘Star Trek Beyond’ is a complete blast from start to finish. Not only is it possibly the best blockbuster we’ve seen this summer season (which admittedly isn’t difficult right now) but it is also a very worthy entry into the franchise, standing as one of the best in the series’ history. It is to the reboot cast what ‘Wrath of Kahn’ and ‘First Contact’ were to their respective casts, a glorious summation of everything we love about ‘Star Trek’ from the awe inspiring visions of the future, the great character dynamics and brilliant action set pieces.


In an era where so many blockbusters serve to be part of a collective franchise it is wonderfully refreshing to see one that stands on its own so well. Everything that takes place within ‘Star Trek Beyond’ is established within the parameters of its own runtime and fully realised by the time the credits roll. There are a few nods and references to previous instalments but frankly I can’t imagine anyone being lost when it comes to establishing where the characters are and why they are motivated to act the way they do.

As well as starring in the movie Simon Pegg is of course lending his talents to the script and he has done a fantastic job here. His script is able to amalgamate several aspects of previous Trek entries and a fulfilment of that huge, adventurous, imaginative, action packed, intelligent, unified, intergalactic, optimistic and wondrous promise that the series has always offered. It harkens back to the original series more than the previous movies of the franchise and it’s all the better for it. Whereas the movies (for better or worse) were always portraying the aftermath of their respective TV  Series (be it Original or Next Generation) ‘Star Trek Beyond’ is the first film to genuinely feel like a feature length, large scale version of an episode of the original Star Trek series.


Even on an aesthetic level it manages to convey that atmosphere. From the colour palette to the set design everything just has the texture and look of ‘Star Trek’. Another great aspect of Pegg’s script is how he plays with the character dynamics and for the first time in a very long time, has crafted a ‘Star Trek’ movie that has a real ensemble feel to it. Everyone has a meaningful role and are able to stretch their characters to new realms. The only downside is that as far as the overall narrative goes this is very much back to basics, but it seems to be a necessary step back to accommodate the themes and characters so it is easily forgivable.


All of this is executed perfectly by Justin Lyn’s directing. From behind the camera you can tell there is a deep rooted passion for this franchise and a desire to nail it on both a tonal and atmospheric level. Not only that by as Lyn proved with his ‘Fast and Furious’ entries he has a gift for using big action set pieces as a backdrop for character interaction and development. He brings that gift to the forefront here and the result is a vibrant and extremely entertaining science fiction blockbuster that is driven mainly by its characters.


The cast are all excellent, with Sofia Boutella being a welcome addition and despite being unrecognisable under layers of heavy prosthetic make up Idris Elba is an intimidating and meaningful antagonist. The returning players like Pine, Quinto, Saldana, Cho, Urban and of course Yelchin are also superb once again. The film is dedicated to his memory as well as that of Leonard Nimoy and while it is bittersweet to be reminded of his Spock’s passing it is outright tragic for Yelchin, not least because this is the last time this brilliant ensemble will be together especially when they have finally been given a film worthy of their collective talent. But nonetheless it’s a great way to end a career tragically cut short.


‘Beyond’ is a great reminder of why we love ‘Star Trek’.