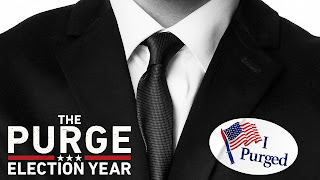 ‘The Purge’ Trilogy stands as potentially the worst whole trilogy in the history of cinema. I know that sounds flippant right off the bat but I have to get it out of the way now because the fact that the first and equally terrible 2013 film ‘The Purge’ spawned two sequels that instead of advancing the movies central theme or doing anything mildly interesting with it (like explaining how the hell it is even supposed to work) chose to pander to the same, uninspired audience base that it inexplicably tapped into with the first one.


Charlie Roan (Elizabeth Mitchell), an up and coming Senator who is campaigning to bring an end to the annual purge (finally someone with common sense) is placed under the protection of Leo Barnes (Frank Grillo) who must fend off attacks from pro-purge supporters as crime is once again made legal for one night only.


Okay, first order of business, crime is mainly motivated by personal gain. It is not something committed by millions of people just for the hell of it, or just because they “want to watch the world burn”. Secondly and more importantly, who can even relate to this movie? The premise is so outlandishly impossible and would so obvious never happen but the film itself keeps trying to present itself as a cautionary tale and we should not allow laws like this to happen because apparently we are all too stupid to realise this is a bad idea.


That being said, if America ever does adopt a Purge-like law, it will be films like ‘Election Year’ that have sent it there (well either that or Donald Trump as president). It feels as if it’s almost relishing in each murder that is on screen not just for the bad guys but for the innocent bystanders, the heroes and anyone on the different side of the political argument. It goads audiences into cheering for its own moral decay and that’s not to say that other films have focussed specifically on reprehensible characters but even they seem to have a more objective view or proceedings than ‘The Purge: Election Year’.

I honestly feel like this movie’s ideal audience would have cheered even if the female senator was gunned down at the end (spoiler, for which you should thank me). I mean I usually try to keep politics out of reviews but with so many recent tragedies involving violence not to mention to current political turmoil being felt across the world it is hard to draw your attention away from it. It’s made even harder due to the sloppy and shallow attempts to make the film feel politically relevant.


Does that make it challenging? Not in the slightest with its shoehorned political message, terrible dialogue and characters that are either poorly written or suffering from schizophrenia, then again these are the same characters who turn out in droves to murder people as soon as they get the go ahead so that is also a possibility. The violence is never raw or visceral but actually somewhat tame and crowd pleasing with its shaky cam, hand held digital camera approach to filming it. It’s almost as if they knew the real implications of this idea would turn their own audiences off the film so they watered it down to an idealised yet wildly inconsistent world.


The inconsistency doesn’t stop there, the senator who is being targeted will protest the purge itself but doesn’t seem as bothered when Frank Grillo comes to the rescue by gunning down her attackers, after all the purge itself is what lets them get away with those murders so should she not be at least a bit upset? It’s fine to murder people as long as you’re the hero. Again ‘Election Year’ is not the only film to do this but what stops James Bond and Indiana Jones falling into this dilemma is that they don’t have any clumsily placed political agenda within their films, nor are they as wildly inconsistent when it comes to dealing with each character.


There is nothing emotionally involving, nothing intellectually challenging and nothing cathartically thrilling to be found here.