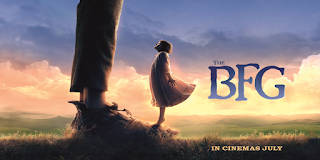 "I hears your lonely heart and all the secret whisperings of the world."

So it looks as if Steven Spielberg’s adaptation of Roald Dahl’s classic children’s story is going to be the directors first major box office bomb since ‘Empire of the Sun’ in 1987 which is a starling revelation. The words box office bomb and Steven Spielberg are not words that have a lot in common and it is somewhat baffling, because while this is by no means a great Spielberg film it is far from the worst of the director’s extensive filmography.


An orphan girl named Sophie (Ruby Barnhill) befriends a benevolent giant known as the BFG (Big Friendly Giant, which is kind of weird because giant and big are essentially synonyms, so in actuality the title is Giant Friendly Giant, but then again this is Dhal, moving on) played by Mark Rylance who takes her to giant country where they attempt to stop man eating giants that are invading the human world.


Filmmakers have always found it difficult to capture the magic of Roald Dhal on the big screen, the wonder of his writing comes mainly through his beautiful use of language and alliteration, his various writing techniques, the rhythm and rhyme with which he describes the world and the nature in which each character speaks as well as the sheer eccentricity of it all. His play on words is ever present and wonderful to behold, unfolding almost as a miniature riddle (a personal favourite being from ‘Charlie and the Chocolate Factory’ with “The square sweets that look round”).


But that’s enough hero worship, my point it Dahl’s sensibilities are difficult to recreate as a visual medium for this very reason. Try as he might I fear Spielberg has also fallen short of the mark when it comes to replicating it, there is an undeniable charm to ‘The BFG’ that’s assisted by some truly amazing CGI work and some wonderfully hilarious moments that would have anyone laughing out loud. Never let it be said that Spielberg can’t make a fart joke work.

That being said Spielberg seems to be so good at crafting excellent family entertainment that even his lesser efforts are very commendable. He retains that brilliant ability to invoke awe from any audience member regardless of their age, we feel the size and scale of the world around them as well as the sheer wonder of how fanciful these varying elements are. This is also assisted by some truly incredible motion capture work and a terrific performance from Mark Rylance as the titular character (I'm glad that he’ll be teaming up with Spielberg a third time for their next project ‘Ready Player One’). There is a gentle nature to his performance but also one of intimacy that focusses on pure emotion.


This attitude is matched by Spielberg’s direction that has an appreciation for the little things in life, a theme that works perfectly in a setting like giant country. The film is one of dreams and meaning, worlds beyond ours and acceptance from others. It is quite thin on plot but I feel as if that only brings forward the brilliant characters and being a fan of the original book to this day I can tell you that the film is an accurate adaptation. However at times the film does struggle to compensate for that lack of plot, Dahl did so through those brilliant writing techniques I described earlier, but Spielberg cannot simply put written words on the screen for half an hour until the action picks up again. He has to represent that sense of wonder visually and it doesn’t always work, becoming dull or repetitive at times.


Then again this is a children’s film, there is no doubt about that. Of course I don’t say that in an insulting manner, after all ‘E.T’ is a children’s film. However whereas ‘E.T’ was able to transcend any categorisation with its universal themes and messages ‘The BFG’ struggles to do the same. I would like to think that adults could find some appeal in the film as it moves along and for the most part it avoids drifting into a sense of boredom by evoking a childlike sense of wonder, but as ‘The BFG’ struggles to sustain that feeling it also struggles to keep me invigorated for the entirety of its runtime. A substantial amount of that childlike wonder is also brought forward by Ruby Barnhill whose performance is one of the best child performances of any Spielberg film. There’s also another beautiful score by John Williams (would you expect anything less from the man).


In many ways ‘The BFG’ is this generation’s ‘Hook’, by no means the best Spielberg film but so full of charm and merriment that it is likely to be adored by both children and parents.


An imperfect but charming and wondrous entry from Spielberg.