It’s that time of year again, the time when the best movies of last year that you were probably sick of talking about a while ago are now all in contention for what is, for some reason, deemed to be the biggest night in Hollywood. So as usual I’m expected to make some obligatory set of predictions that will most likely be wrong and laughed at by future generations. As far as the Oscar field goes this year has been surprisingly brilliant, with a diverse and wide range of movies being nominated that all have some form of merit in one way or another, as long as you don’t acknowledge that ‘Suicide Squad’ is amongst them. 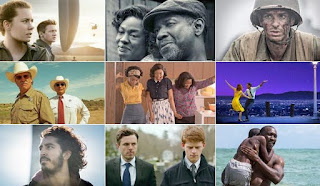 When it comes to this year’s field of Best Picture nominees it is a very strong range of movies. While I have not written full reviews for all nine of the movies I have seen them all and can say with confidence that in a rare event I actually like every single one of the nominees. Every year there is some middling or perfectly average movie that somehow gets nominated and baffles me, but this year I think every movie is a worthy inclusion to this selection. What I appreciate most of all is that the films nominated this year were exclusively about the human experience in one way or another. None of them sought to push an idea or agenda, they were simply relaying stories that are about all of us and doing so in a brilliant way. For the sake of filling space here is a quick recap of all nine:


Arrival – A project of soaring ambition and startling intimacy, Denis Villeneuve’s science fiction masterclass is a mesmerising piece of cinema anchored by a decidedly fantastic performance by Amy Adams (how she was not nominated for Best Actress remains the biggest question of the many ‘Arrival’ raises).


Fences – Denzel Washington’s strongest directorial outing yet accompanied by one of the best performances of his prolific career. But Washington is put through his acting paces by Viola Davies who arguably steals the show. Not particularly cinematic but the characters are complex with an authentic struggle that speaks volumes.


Hacksaw Ridge – Despite having a first half plagued with sappy melodrama and poor pacing once ‘Hacksaw Ridge’ reaches the battlefield Mel Gibson’s visceral vision shines through in stunningly realised scenes of war with Andrew Garfield’s excellent performance bringing an inspirational and uplifting story to the big screen in all its glory.


Hell or High Water – A Conventional story told brilliantly in the second part of Taylor Sheridan’s New Frontier Trilogy. It may not be hugely complex but it is terrific entertainment from its performances, writing and direction by David Mackenzie.


Hidden Figures – Another uplifting historical drama about race but ‘Hidden Figures’ remains memorable for its brilliant lead performances and uplifting narrative. Despite a few too many subplots that detracted from the main focus and the supporting characters being too one dimensional it’s still a pleasing movie.


La La Land- Dazzling, emotional and possibly the most entertaining movie of the year, Damien Chazelle’s second fable of dreams and their cost boasts some of the most impressive direction of the year as well as two brilliant performances in Emma Stone and Ryan Gosling. A crowd pleaser that manages to be deep and transcendent at the same time. There’s a good reason it’s the favourite to win big.


Lion – Surprising in how well it renders its inspirational story and paints and extremely endearing portrait of home, identity and searching. The cinematography stood out as being particularly impressive as did Dev Patel’s emotionally resonant performance.


Manchester by the Sea – Depressing and bleak for much of its run time but don’t let that put you off Kenneth Lonergan’s deeply emotional and strikingly poignant film. Its characters are complex and motivated as well as being brilliantly realised by the entire cast with Casey Affleck and Michelle Williams being the standouts.


Moonlight – Deeply personal to an almost haunting degree at times. Intimate filmmaking at its best that tells a life in three exquisitely crafted chapters each one with am extremely capable actor to portray the main character. If any film posed a threat to ‘La La Land’ it would be this.


So if I were to pick a winner from these nine nominees I would have to side with ‘La La Land’. I hate to be predictable and conform to the mass opinion, but I honestly cannot think of anything more spellbinding or complex as Chazelle’s musical masterpiece. I would raise an air of caution towards ‘Moonlight’ or even ‘Manchester by the Sea’ offering worthy competition but all the signs are pointing towards the fools who dream.


It’s another case of being a strong category all round and once again it seems to be a three horse race between Chazelle, Lonergan and Jenkins (though I do appreciate the nomination for Villeneuve’s excellent work on ‘Arrival’). And once again I hate to go with the obvious choice but I would have to single out ‘La La Land’ and Damien Chazelle the take home the award.


Narrowing it down to the two favourites we arrive at Affleck or Washington. Denzel’s performance was a remarkable one and by no means should this be considered a foregone conclusion. But when it comes to a complex, haunting and painfully humane performance Casey Affleck seems to have the edge in every regard.

I’m caught at a crossroads between whom I want to win and whom I think will win. I think to all intents and purposes Emma Stone is the favourite, but when it comes to my own choice of who I want to take the sought after award, I would have to put my vote towards Isabelle Huppert for ‘Elle’. While Stone is superb to a degree that I would not be annoyed if she were to lose out I would be somewhat disappointed as Huppert delivered what I can without question call the single best performance of 2016. So while I still believe Stone is the most likely to win I’d be happier of they allowed Huppert to walk away the victor.


Despite losing out to Aaron Taylor Johnson’s performance in ‘Nocturnal Animals’ at the Golden Globes, Mahershala Ali still remain the favourite to win for his performance in ‘Moonlight’, a decision I certainly can’t fault. However, once again I’d air a note of caution from the likes of Dev Patel and Michael Shannon.


In my opinion this is once again a race between ‘Fences’ and ‘Manchester by the Sea’ but unlike the Best Actor category this seems much easier to predict. While Michelle Williams is astonishing Viola Davis seems to be destined to win here. By all accounts she should be in Best Actress category but with the competition being tougher there she was slated into the Supporting category to guarantee a victory. It’s hard to imagine anyone else taking it.

This catgory presents another conundrum, because yet again ‘la La Land’ is marked as the favourite and despite the strength of Chazelle’s script I would much rather see the award go to something a bit more intricate. The various layers of narrative, complexity and superb structure of Lonergan’s script for ‘Manchester by the Sea’ mark it out as a deserved winner, but if the Academy really wanted to impress me they could choose ‘The Lobster’ for pure originality and bizarreness alone. As for the Adapted Screenplays it’s difficult to call a clear winner. ‘Hidden Figures’ and ‘Lion’ are fine but fall down with their conventionality on a narrative level. ‘Fences’ uses the word “adapted” liberally as it’s a word for word construction of the play. So that leave ‘Arrival’ and ‘Moonlight’, the existential or the intimate? Difficult choice, but in terms of what the Academy will favour I’d back ‘Moonlight’.


A very strong and varied line up and I say that without even getting around to seeing all of the nominees. I have it on good information that ‘The Red Turtle; is spectacular and despite the ‘Moana’ and ‘Zootopia’ for their social messages and excellent craftsmanship, I would have to voice my support for the stop motion masterclass ‘Kubo and the Two Strings’, though I wouldn’t be surprised if Disney end up adding to their awards cabinet.


For a long time ‘Toni Erdmann’ looked dead set to take home the award and if it still did I would have no complaints. But recent events suggest that maybe, just maybe the Academy will want to send a political message by voting for ‘The Salesman’, directed by Asghar Farhadi who is unable to attend to ceremony due to a certain travel ban by a certain orange stained sociopath.

Many worthy candidates and picking a winner in question is extremely difficult. ‘13th’, ‘Life Animated’, ‘I Am Not Your Negro’ and ‘Fire at Sea’ are all terrific works of cinema. But I’d have to hand the award to quite possibly the finest filmic achievement of 2016, one I did not include in my annual list because it seemed unfair to rank ordinary features against it, and while I’m still unsure over whether it is a seven hour movie or an epic mini-series if ‘O.J: Made in America’ is up for an award it should most certainly receive one.


As for a few other select categories, I would expect both Best Song and Best Score to go to ‘La La Land’ (somewhat obviously). Best Sound Editing could potentially be given to ‘Hacksaw Ridge’ but any other nominee is also deserving there. Production Design is probably also ‘La La Land’s’ for the taking, as is Costume Design. Cinematography and Editing are two tough races, but yet again I would expect it to come down to either ‘La La Land’ or ‘Moonlight’ for both of them.
Posted by Joshua Price at 11:32