I Don't Feel at Home in this World Anymore 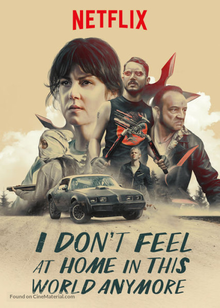 "I just want people to not be assholes."

In an age where even independent films seem to think that compelling cinema means raising the stakes and conflict to unnaturally high levels in an effort to engage the audience it must have been refreshing to see a film like ‘I Don’t Feel at Home in this World Anymore’. Having won the Grand Jury Prize for a Dramatic Presentation at the 2017 Sundance Film Festival it is now on Netflix for mass consumption, and while I’m disappointed at the lack of a theatrical release, if it means movies like this will get more exposure I am certainly pleased.


After being burglarized, a depressed woman (Melanie Lynskey) and her obnoxious neighbour (Elijah Wood set out to find the thieves, but they soon find themselves drastically out of their depth as they are pitted up against a group of dangerous criminals who are not merciful to those who interfere with their business.


Despite the fact that the summary seems to have the makings of any standard genre film, ‘I Don’t Feel at Home in this World Anymore’ is concerned with the interactions between people, the hostility that permeates modern society and a general search for answers. Instead of focussing on the mechanics of the plot it contemplates the tiny details of a person’s life that can either make or break their day. In its bleak but humorous opener that is a deadpan montage of the main characters daily struggles, we see the environment and tone of the movie laid out fairly well. Though it veers off in several directions from there as it struggles to balance several moods at once you can’t blame first time director Macon Blair for trying.


This opening scene also sets up the way in which the film deals with an ordinary citizen simply pushed to the breaking point. With a comedic edge by its side the film treats each escalating problem as nothing more than a mild inconvenience and is more interested in conveying how this impacts the psyche of the main character. If anything that is where the film draws much of its comedy, from contrasting the eccentric nature of the situation to the grounded way the characters react to it.


Those characters in question are played very well by a talented cast. While I can’t say any of them were pushing their own acting boundaries or crafting a performance for the ages they were all serviceable and matched the tone of the film around them very well. Lynskey’s deadpan attitude is a pleasant contrast to Elijah Wood’s bizarre mannerisms that are consistently hilarious throughout the movie. Lynskey remains the only human character amid an ensemble of exaggerated cartoons but once again that helps the movie draw a lot of its humour, and it understands that she is the character we are supposed to empathise with. Like her we are almost baffled by the oddities of this rapidly escalating world. The only issue is that after a while it starts to wear somewhat thin, feeling more like a lack of effort than a stylistic writing choice.

One also has to credit the actors for balancing so many varying tones as the movie itself begins to introduce various styles and moods. It is in this sense where the writing starts to fall down slightly as it struggles to maintain a consistent tone as the film ploughs on, but the actors themselves are able to handle these varying moods very well, from the comical to the darkly observant. Outside of Lynskey none of them really need to go beyond a caricature but they serve their purpose well enough. On a technical level Blair keeps the same understated direction through all the comedy, social satire and darkly poignant character moments. He also seems to have learnt a few lessons from his collaborator Jeremy Saulnier by using some contrast heavy cinematography that really lights up the low-life suburban level he is depicting.


The movie is one that observes social norms rather than actually commenting on them. Like its protagonist it looks at each passing problem and moves forward regardless. Though it would be easy to drift further down this road of social commentary it’s not the story Blair wants to tell. Whether he wanted his debut to be a low key affair or just felt more confident in relaying this kind of story is difficult to tell. I do worry that ‘I Don’t Feel at Home in this World Anymore’ is the kind of movie people will project a lot of deep thoughts onto, treating it as if it is some awe inspiring fable of modern times. While I can safely say I enjoyed the film and its vision I do not view it as a perfect film or a particularly meaningful one. As I said it observes and does little else, but it observes rather nicely.


A decently made and keenly observant gem that stays firmly within its comfort zone.