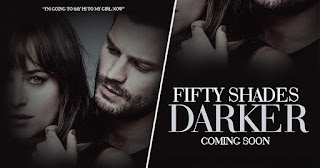 "This time, no rules, no punishments and no more secrets."

The first ’50 Shades of Grey’ movie represented everything I hated about the modern movie industry. It was a soulless cash brag that latched onto whatever trend was currently popular regardless of whether or not it was actually good or worth adapting in the first place. In this case the source material was a terrible novel that began its life as ‘Twilight’ fanfiction, so basically garbage that led to more garbage. Now there’s a sequel, and against all the odds, it’s even worse.


When a wounded Christian Grey (Jamie Dornan) tries to entice a cautious Anastasia Steele (Dakota Johnson) back into his life, she demands a new arrangement before she will give him another chance. As the two begin to build trust and find stability, shadowy figures from Christian's past start to circle them, determined to destroy their hopes for a future together.


I can understand why certain people will want to see certain films, even some of the worst movies I’ve seen in recent years could at least hide behind the shield of delivering exactly what a specific group of people would want and nothing more. But for the life of me I cannot understand why anyone would be mildly entertained by ’50 Shades Darker’ (except as an unintentional comedy). I doubt anyone would actually be wrapped up in this generic, shallow and formulaic love story but at the same time if you go into this film hoping for porn then I can’t understand how it fills that need. I said the same for the first ’50 Shades’ movie and I shall say the same for this one, it is not even remotely sexy. I would honestly have more respect for someone if they randomly walked up to me and said “I just watched two hours of soft core pornography” rather than saying “I just watched ’50 Shades Darker’”. At least with the former statement you have watched something that delivers exactly what you were looking for.


Any romantic movie will hinge on the idea that its leads share a good chemistry together and work as a couple you want to see together and have sympathy for. But then again this trash is successful so I’m beginning to wonder why anyone bothers with that. Instead you could create two characters so utterly devoid of any depth, defining characteristics or empathetic details that I just started referring to them as “blank slate A” and “blank slate B”. There is no chemistry, no romantic tension and no sense of emotional connection between them.  The author of the original novel, E.L James (she wrote it on her Blackberry phone) insisted that the sequel procure a different screenwriter as the first film did an unsatisfactory job of translating her genius to the big screen, so they did and would you believe the luck that she just happens to be married to the screenwriter they chose? Of all the odds right?

I bring this up because as much as I’d hate to bash the combined output of this creative power couple, it is awful in every way. The script lacks all sense of pacing, structure and coherent story arcs. At the start of this review I gave a quick plot synopsis but it’s ultimately irrelevant to the movie itself. There are subplots and deviations that go nowhere from helicopter crashes to murderous stalkers and none of them last more than a few scenes or are addressed for longer than five minutes. I left the movie feeling infinitely more confused that when I had entered, knowing next to nothing about the characters, environment or scenario. I suppose the obvious answer for why the script ended up like this is that it was prioritizing where it could put the next sex scene. But it even manages to fail at that. The scenes in question are lifeless, lacking in energy and horribly integrated into the movie.


I suppose the only way this film does improve upon the original is the way it is shot. Unlike the bland, dead eyed colour palette of the first film ’50 Shades Darker’ at least has an eye for competent composition and contains cinematography that is not reminiscent of staring at a concrete wall for two hours. That is hardly surprising given that James Foley is in the director’s chair here. The same James Foley who once upon a time directed the excellent ‘Glengarry Glen Ross’, a film so tightly composed and exquisitely crafted that I could do nothing but stare in disbelief when I saw how ths film was directed. Though some individual shots are nicely composed, the cohesion from shot to shot and the connective tissue that makes up each scene is so bafflingly off that it genuinely becomes difficult to place where two people are within a scene that involves just two people.


As for the two leads, Dakota Johnson and Jamie Dornan reach into their very souls to bring forth a pair of performances that display astonishing range with one or maybe even two different facial expressions throughout the entire movie. Granted the shallowness of their characters is unlikely to help but even this material feels underused in their hands as they fail to convey a single solitary emotion that goes beyond “I like you because you’re attractive”. You would think that amongst the supporting cast at least one role would shine, even if by accident. But no, even an Oscar winning actor like Kim Basinger seems to be trapped in the same bland and bored expression. All of this is only punctuated by an equally bland and lifeless soundtrack. How romantic.


Like its predecessor ’50 Shades Darker’ is a summation of everything that is wrong with modern movies.