Okay, so there is a lot to talk about here and I might as well address the elephant in the room immediately. Best animated short film went to Piper and not Borrowed Time? Wow, talk about a screw up academy. Oh and of course there was also the inconvenience of announcing the wrong winner for the most esteemed award in all of show business. You had one job Hollywood, and it was to hand someone an envelope. How you managed to mess that up is beyond me, how no one just saved themselves the embarrassment and mentioned that they had the wrong envelope before is beyond me. It’s fitting that they reunited Faye Dunaway and Warren Beatty to announce it, because ‘Bonnie and Clyde’ ended with a massacre and so did their reunion for this event.


Granted I’m far from annoyed at ‘Moonlight’ winning, it is a deserving and progressive winner, but the manner in which ‘La La Land’ lost out hurts my soul. But amid this fiasco I feel like we also saw the best of those at the eye of the storm. The ‘La La Land’ producers graciously accepting what had happened and personally handing over the coveted award to the team of ‘Moonlight’, the superb way Jimmy Kimmel (who I found to be a surprisingly good host on the whole) kept control of the situation or the very fact that they admitted the mistake in the first place because when you think about how easy it would have been to dismiss the actual results in the wake of this mistake it is commendable that they revealed the truth to such embarrassment. 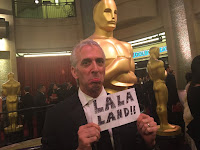 If you were a keen supporter of ‘La La Land’ like myself and were both elated and disheartened beyond belief in the space of a few moments, take solace in the fact that you were not esteemed film critic Scott Mantz. Once the false announcement had been made Mantz took to Twitter to congratulate ‘La La Land’ only to have to make a rebuttal mere moments later. Still even he saw the funny side and took time to pose for this photograph which seems to summarise the entire chaotic moment.

But let us not allow that one blunder to spoil a whole night of great talent being awarded. ‘La La Land’ still bagged a commendable haul of 6 awards putting it on par with the likes of ‘Star Wars’, ‘The Godfather Part 2’ and ‘Forrest Gump’ and in my own opinion it deserved every one of them. Stone and Chazelle in particular were worthy recipients of their trophies and while it may not have been the clean sweep some were anticipating it is most certainly not a failure in any regard. But far more importantly I happened to be right in all of my predictions for the acting categories, and once again they were all very well deserved.


Both screenplay awards went as expected but sadly Laika Studios once again lost out to the juggernaut of Disney, who won with ‘Zootopia’. Despite backing it will my heart and soul to win its category I was surprised ‘O.J: Made in America’ was actually able to secure its award, but that it did so hopefully that can end the argument over whether or not it’s a movie or a TV series. It’s now conclusively a movie and a great one at that. It almost makes me forget the sheer horror when I have to confront the notion that ‘Suicide Squad’ is now an Oscar winning film. I just threw up a little in my mouth as I said that, especially given that other films with one Oscar include ‘Citizen Kane’ and ‘Eternal Sunshine of the Spotless Mind’. It won in Best Make Up which it wasn’t even good at anyway, beyond some clown paint and a horrendously obvious CGI enhanced prosthetic it was pathetic, which makes it all the worse that ‘Star Trek Beyond’ whose make up work was truly outstanding lost out as well.


I also predicted that politics would likely play a part in helping ‘The Salesman’ win Best Foreign Language film over the favourite ‘Toni Erdmann’. The fact that Asghar Farhadi was unable to see his own film winning an award spoke volumes. Then you also have the fact that Mahershala Ali became the first Muslim actor to win an Oscar and (I’m saying this a lot I know) deservedly so. It is supremely difficult to think of any supporting performance in 2016 that left a stronger impression. If anything I hope that beyond the blunders and snubs this year’s Oscars is remembered for these small social breakthrough’s that demonstrate the unique power of film and in their own small way make a difference beyond the cinema screen.
Posted by Joshua Price at 13:44