Have a Nice Day

"I'm just passing through, don't worry about who I am."

The issue of style over substance is always a difficult one to distil. Certain movies go to great lengths to infuse their style and substance together so that they complement one another for each moment of screen time. But then again other movies go to the lengths of making points relating to how the style is the substance, and style need not be motivated if it itself is the main driving force behind a film’s creative outlook. In essence one has to make a judgement on the film’s story and decide whether the specific stylistic choices hurt or hinder the movie as a whole.

Xiao Zhang is a young driver working for a brutal gang, who decides to steal a bag of money from his employers. This prompts a city wide chase from several nefarious people from questionable backgrounds who are each driven by their own conflicts to procure the stolen money and in turn are drawn into a bloody and messy conflict.

There’s no question that the actual plot of Liu Jian’s crime film isn’t that original by way of its own merit. There are contrivances littered throughout the plot and hardly any involving turns in the overall structure of the movie, what you see within the first five minutes is basically what you get for the remainder of the movie. However it distinguishes itself through the method of how said plot is told and while it still flawed, it’s certainly intriguing to witness.

As I said earlier, ‘Have a Nice Day’ is the kind of movie in which the style is the very essence of the film and why it leaves any impression. The background of each frame is richly drawn and layered, but the character animation itself is simplistic and somewhat stilted. Perhaps alluding to the fact that in the grand scheme of things the environment around these characters is what matters, and their personal struggles are crude and meaningless in the end.

That would certainly match the tone of the film’s dialogue, which is littered with allusions to the broader economic situation that motivates these characters. They all share in a constant struggle to make ends meet, in a world that is rapidly embracing globalism and merging of cultures. But Liu doesn’t seem intent on making a statement on these issues as much as he just wants to observe them. He uses them as a means to frame his characters and then allows his escalating crime story to unfold.

Perhaps that is also where ‘Have a Nice Day’ stumbles. It’s central plot and thematic conceit are intriguing for the first half of the movie but gradually begin to wear thin with no greater detail to characters or theme. The film feels underdeveloped as the plot continues to trudge forward and the characters refuse to be fleshed out or endowed with any kind of depth. We only know the basic motivation of the main character Xiao and even then this drive isn’t explored to any greater detail than what is immediately presented to us. 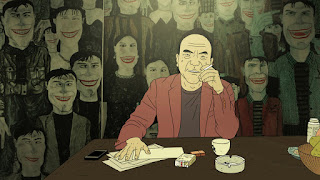 It also doesn’t help that the story goes through several non sequiturs and detours just to arrive at the same destination. The film attempts to structure itself but none of these pacing decisions come across as purposeful or meaningful in any significant way. Also, as inventive as the various stylistic quirks within the movie are, they can’t help but defuse any atmosphere the film had built up to that point within the scene. I understand that they were deliberate placements but they seem to work in contrast to certain creative decisions that were made prior to their inclusion.

But despite these narrative flaws, there’s still a lot to admire within ‘Have a Nice Day’ which marks it out as one of the more unique filmic experiences so far this year. Firstly the wonderfully dark sense of humour that permeates the movie is noted right from the start and crops up to brilliant effect throughout the film. It lends itself to the overall satirical feel of the film and gives some of the more brutal scenes an added sense of depth. None of the violence within ‘Have a Nice Day’ feels contrived because it’s clear that it serves a purpose wither within the story or the greater thematic conceit that the film is trying to communicate.

‘Have a Nice Day’ the kind of movie that I can admire more than love. It clearly has a subject to discuss and makes sharp commentary on broad social issues within the environment in which the story is set. But the film also feels too awkward on a narrative level to really draw me in. I struggled to feel invested or involved in what was happening mainly because the film seemed to take every opportunity to ensure I wasn’t, which in turn made its ultimate impact much less prevalent.

Stylish and artfully constructed, but too distant to feel compelling, ‘Have a Nice Day’ is an flawed but still highly intriguing work of cinema.