"We're not born evil, we must be made evil by the fire. Then we can be happy."

I can understand a level of scepticism that comes with any new adaptation of Ray Bradbury’s 1953 novel, especially given that the last attempt to bring the novel to life on the big screen was helmed by legendary auteur Francois Truffaut. But it’s not as if recent events don’t lend themselves to an adaptation of the novel being frighteningly relevant. Also with the talent attached to this version that includes Michael B Jordan and Michael Shannon as well as the directing prowess of Ramin Bahrani, there’s reason to hope for something special.

In the distant future, books are banned and ordered to be burned by the "firemen". One of these firemen is Guy Montag (Michael B Jordan) who along with his superior John Beatty (Michael Shannon), goes about his work without questioning motives, believing he is helping out with the end of seeking knowledge. But all of this is soon to change.

Bahrani’s films have always steered towards being stories of social relevance just as much as they are stories of individuals, and he always strikes the perfect balance between these two goals. One only need to look at ‘Chop Shop’, ‘Goodbye Solo’ or ’99 Homes’ for proof of this. Given that ‘Fahrenheit 451’ is explicitly political in its allegory, in theory all Bahrani would have to accomplish to make a hard hitting adaptation of Bradbury’s novel would be to take his usual storytelling prowess to the sensibilities of a more high concept narrative. But that theory doesn’t quite come across in execution.

The film seems much more prioritised in trying to hit the allegorical beats of the narrative rather than work as a compelling story in of itself. There’s no urgency to the plot or how we are introduced to this dystopia. That might be due to the fact that so much of that dystopia is conveyed through clumsy exposition rather than any solid visual storytelling. There’s not enough substance within the opening act of ‘Fahrenheit 451’ to make the audience feel involved with the plot and instead the movie just trudges forward at the same dreary pace at which it opens.

It’s somewhat baffling because Bahrani’s usually impeccable visual language seems to be severely lacking here. His style which is often achingly humane just comes across as repetitive and derivative here. There’s no visual flair or dynamic movement to the way he films these scenes and as a result the movie just descends into being one flatly staged scene after another, each one feeling more inconsequential than the last. I defy anyone to feel any serious impact as the plot unfolds or to feel the biting social allegories that Bradbury’s novel conveyed so fearfully. 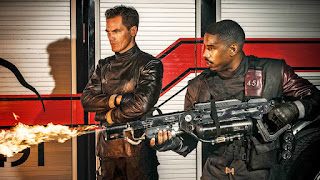 Another issue in making the ideas within the narrative feel connected to our own lives is how the film renders its dystopian landscape as more alien and artificial. It almost seems as if the goal of the production design was to make the world of the fireman feel as separate from our own. It puts a space between the humane core of the story and the social relevance it holds. There’s simply no major impact to be had when these characters experience certain events because they are all so alienated from any potential parallel between their world and ours that would make their plight feel resonant.

This adaptation also fails to understand that certain aspects of the book on which it is based simply do not translate as well to the screen. Truffaut understood this in his version when he worked to make the material fit more uniquely into the medium of film rather than the written word from which it originated. But so much of the dialogue and exposition in this 2018 version comes across as stilted and artificial. As I said earlier Bahrani’s direction falls short of making these conversations feel engaging anyway, but the mechanical nature of the dialogue only makes the issue even more noticeable.

Shannon and Jordan are usually the saving graces of any bad movie either one of them is in. However while I wouldn’t call their performances in ‘Fahrenheit 451’ incompetent, they lack a dimension that would give the characters they are portraying a sense of discernible depth. There’s not enough humanity within Shannon’s portrayal of Beatty for the character to feel sympathetic, which is a problem given that the film repeatedly asks us to relate to his situation. Jordan at least shows more range as he can break out a villainous menace while following the orders of his repressive superiors, but also display a more conflicted vulnerability as he begins to have doubts for his cause. But these different motives are never unified by consistent characteristics or traits so his performance feels highly inconsistent. Any film in which these two actors can’t evoke something from me really is a nightmare dystopia come to life.

A sterile and uninspired adaptation of what should be an all too relevant story, this HBO film is the product of several talented artists who just seem to be missing the mark on this occasion.