"The game is real. Wherever you go, whatever you do, it will find you."

There seems to be an increased reliance on gimmicks when it comes to horror movies now, particularly within bad horror movies because the fact that their plot was written around a premise becomes abundantly clear. I think it’s with the intent to draw in a younger audience by crafting a horror movie around something that they can relate to. Every teenager has played truth or dare at some point right? (if you haven’t then just be thankful). At this point I honestly wouldn’t be surprised if we get a ‘Never Have I Ever Movie’.

Olivia, Lucas and a group of their college friends travel to Mexico for one last getaway before graduation. While there, a stranger convinces one of the students to play a seemingly harmless game of truth or dare with the others. Once the game starts, it awakens something evil a demon which forces the friends to share dark secrets and confront their deepest fears.

Actually since typing that introduction I remembered that there was a whole sequence within ‘Unfriended’ that used Never Have I Ever as the premise for a sequence that was apparently supposed to be scary but in all honesty just came off as ridiculous. That being said if you thought that was ridiculous then ‘Truth Or Dare’ will expose you to entirely new levels of stupidity masquerading as a horror film. It’s a rare kind of horror film that is so inept that I almost want to recommend it.

What makes ‘Truth Or Dare’ uniquely bad is that the screenplay or narrative in of themselves are not horrendously awful. Make no mistake they are still contrived, formulaic and as logic defying as any terrible slasher. But they are not bizarre enough on their own to make this movie feel enjoyably terrible. That is due to the execution which just feels so awkward and meandering in how it tries to convey any mood or information to the audience.

Even the establishing scenes which have the goal of introducing the characters and environment more than evoking any sense of fear, still come across as woefully misguided. The actors are so often filmed in awkward close ups that just come across as jarring rather than uncomfortable. This alone would not be enough to ruin a movie, but the particular directorial choices made during this first act manage to highlight the other awful aspects of the movie.

Think of it as a snowball effect. Bad acting makes already awful dialogue sound even more artificial, which is then highlighted by the contrived and awkward style of direction, which are subsequently edited in a manner that draws even more attention to them. In the first act of ‘Truth Or Dare’ I can’t recall any basic establishing shots or even a simple shot/reverse shot. Many filmmakers within the horror genre have used more unconventional methods of shooting to evoke an unsettling atmosphere but the effective examples of that have strong casts and screenplays to work with. In this case it just comes across as painfully superficial. 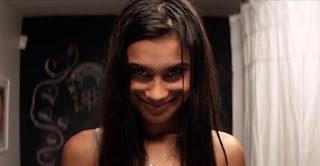 The whole thing is only made more hilarious due to how blatantly obvious it is that the movie was written by people attempting to pander towards younger audiences with absolutely no understanding of youth culture. If someone my age started talking in the same way as some of the characters in this movie then I would instantly have to assume something supernatural was taking place due to how stilted it is. The fact that the characters stating this dialogue are all superficial blank slates whose behaviour and motivations change constantly throughout the movie creates a cast that is so inconsistent in their dynamic and actions that I defy anyone to describe any of their personalities.

The weak way in which the characters are written almost makes me hesitate to criticise the cast because it’s hard to imagine anyone elevating this material. All in all they make for what might be the least compelling cast of characters that it’s humanly possible to conceive of. Their dynamic at the start of the film tries to allude towards the way their interaction develops and dictates their decisions later down the road but neither the actors nor the screenplay possess enough nuance to make those setups not feel painfully obvious. Then at one point the screenplay demands that the actors pull off a more menacing persona as they become possessed which none of them are capable of conveying either.

But these characterisations are nothing compared to the frankly laughable attempts to induce fear within ‘Truth Or Dare’. This is a more subjective aspect of criticising the movie but there are so many instances in which the movie presents a visual that is supposed to be frightening but instead elicited laughter from me. It’s hard to explain but some moments within the film are simply hilarious. Maybe it’s the inherent ridiculousness of these images and the way they are rendered, maybe it’s the complete commitment the movie has on insisting that a literal ear to ear smile is immensely frightening. Whatever the reason, the genuinely frightening moments within ‘Truth or Dare’ make it one of the least affecting horror movies in recent memory.

Lazy and uninspired in a way that makes even the more unintentionally hilarious parts difficult to endure, ‘Truth Or Dare’ represents all the faults of modern horror.