"Doing the right thing is messy. But sometimes, to do what's right, you have to fight dirty."

Though it was only 2 years ago it’s almost difficult to imagine a time before ‘Deadpool’ (I mean it isn’t really but for the sake of this introduction pretend it is). It was a time at which financial gain and out of the box thinking were not considered compatible aspects of a comic book movie, or certainly not on a large scale. The movie felt like a breath of fresh air because that’s precisely what it was, an amazing new section of the genre that resonated with audiences on a massive scale. The question is though, how does a sequel to such a movie remain as fresh and resonant?

Wisecracking mercenary Deadpool is still living the fast life when he (Ryan Reynolds) meets Russell (Julian Dennison), an unstable teenage mutant in dire need of support. When Russell becomes the target of Cable (Josh Brolin), a genetically enhanced soldier from the future, Deadpool gathers an elite force of mutants with the goal of protecting the young mutant from his technologically advanced hunter.

There’s a tendency with movies that are surprisingly successful to lose some of their charm with the sequel. A studio will see an easy opportunity and try to manufacture the same kind of passionately driven intent that made the original any kind of phenomenon in the first place. In fact if any sequel would fall into this trap I was particularly worried that it might be ‘Deadpool 2’ as the violent, satirical, fourth wall breaking stylistics of the first movie could easily confuse any executive into believing that it was merely the surface level elements that drove the first film to success and not the deeper and more resonant themes.

With all of that being said it is a pleasant surprise that ‘Deadpool 2’ is not only a worthy successor, but as a piece of cinema it might just be even more impressive than the original. The biggest improvement would be the framing, cinematography and composition. Though Tim Miller brought a great sense of kinetic energy in his direction of the first film his framing seemed a little flat and uninspired at times. However, under David Leitch’s direction (or as the opening credits of this movie put it, “One of the guys who killed John Wick’s dog”) ‘Deadpool 2’ makes great use of varying compositions and angles. Even in the scenes which lack action Leitch finds ways to make the scene layout feel dynamic and involving.

At the centre of that frame is, as always, Ryan Reynolds as the titular merc with a mouth. Reynolds once again brings great comedic timing and such charisma to the role that it is honestly hard to see Wade Wilson as anything other than the character. It’s obvious that Reynolds pours so much of himself into the role that he can’t help but render him as a fully realised entity. An aspect of his performance as Deadpool that seems to be overlooked is how capably he handles the dramatic moments. For all the big laughs (and there are plenty) I never had trouble being invested in the dramatic moments as well thanks to Reynolds commitment. 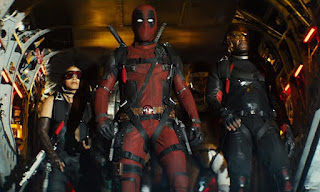 The idea of featuring any sense of sincere drama in a movie with the kind of violent and comedic undertones as ‘Deadpool 2’ might seem unlikely. But much like its predecessor ‘Deadpool 2’ manages to underpin the action and one liners with a character driven storyline that truly endears the audience to what is unfolding in front of them. It establishes its characters but then seeks to peer into them and uncover their motives, history and humane flaws. It genuinely caught me off guard when the third act came around and I realised just how invested I was in this mismatched group of characters, even if the story preceding it does drag occasionally due to some poor pacing. The emotional beats feel earned and rarely come across as manipulative. Of course the added benefit that ‘Deadpool 2’ has is that the instant a moment does start to feel melodramatic they can turn to the audience and be in on the joke.

Obviously these moments would hardly land with the same resonance if they were not held up by such a talented array of supporting performances. Josh Brolin begins his turn as Cable exuding the appropriate amount of menace whilst being a pitch perfect counterpoint to Reynolds turn as Deadpool so that their interactions are a true highlight of the movie. But Brolin also specialises in taking these seemingly one note characters and adding a layer of humanity to them, which he executes brilliantly here. Zazie Beetz is truly fantastic as Domino, striking just the right level of grounded attitude to make both the character and her interactions with the other players of this world feel believable. It’s difficult of me to give away too much of what makes the other actors precisely so brilliant without revealing some plot details or hilarious comedic turns, but rest assured that everyone is committed to delivering a brilliant punchline.

Losing none of the entertaining factors nor the emotionally resonant beats that made its predecessor connect with audiences, ‘Deadpool 2’ is most definitely a worthy sequel.