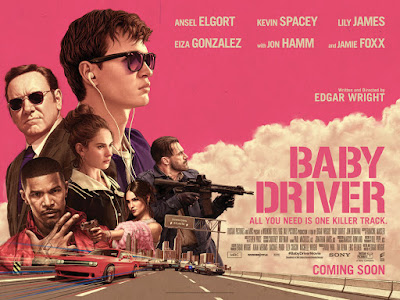 I can think of few other directors whose filmography is so limited but is so respected as Edgar Wright. Despite the fact that this is just his fifth feature film Wright has amassed a devoted fan base that has praised him as one of the finest comedic minds working in film today, a fan base I would very much consider myself to be a part of. ‘Baby Driver’ marks his solo outing as both writer and director so it should be interesting to see how this compares to his other efforts.


Talented getaway driver Baby (Ansel Elgort) relies on the beat of his personal soundtrack to be the best in the game. After meeting the woman (Lily James) of his dreams, he sees a chance to ditch his shady lifestyle and make a clean break. Coerced into working for a crime boss (Kevin Spacey), Baby must face the music as a doomed heist threatens his life, love and freedom.


Edgar Wright does have a tendency to take ideas that sound terrible on paper and turn them into great films. Be it a genre that we think is overdone or a premise that sounds too outlandish to work as a cohesive movie, he elevates all of his material with sharp writing and tightly stylish direction. His comedy movies are a staple of utilizing the full spectrum of visual comedy, rather than merely letting his actors improvise until they have cobbled together something funny, Wright puts his own craftsmanship to good use and creates something vastly more impressive. These erratic directorial touches are less prevalent in ‘Baby Driver’, but that is mainly because it’s less of a comedic film but fear not because it’s still hugely entertaining and infectiously charming.


Like Tarantino, Wright wears his influences and references on his sleeve, and also like Tarantino his more recent efforts have a tendency to value form over function. ‘Baby Driver’ may lack a sense of depth that Wright’s other movies have had, if anything I would say this is his most underwritten movie, but the method of which Wright goes about executing his somewhat basic narrative is terrific. There’s such a great sense of energy and vibrancy that goes right to the core of the movie, invigorating every scene whether it be a car chase or a simple conversation.


A lot of this is down to the music of the film. The sound design of the film is impeccable and the fact that it is all diegetic is a testament to Wright’s filmmaking coordination and imagination.  Half the scenes in the movie are set to music, synchronised with the rhythm and pace of the music Baby listens to from his headphones. It’s not only one of the best soundtracks in recent memory, but it is the best use of a soundtrack within a movie in recent memory. The music choices are not just one note either, they’re all unique and wildly varied, perhaps my favourite example was the decision to stage a gunfight to the tune of ‘Tequila’. The very first scene lets you know what you are in for with a truly spectacular car chase that kicks the film into high gear from where it never slows down. 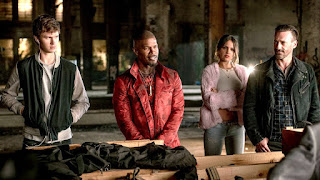 The car chases in question have a weight and versatility to them that shows just how capable a filmmaker Wright is when given the freedom to move where he wants. The stunt work and practical effects are put to great use, with the films editing being clear enough for us to see them in all their glory but fast enough to evoke a sense of pace and excitement. In fact, as is the way with this director, all of the cuts feel motivated and evocative of exactly what he wants you to feel. Even when you put the editing aside you can find numerous shots that convey so much in regards to character dynamics and thought processes with so little.


As I said before, the plot is fairly straightforward, being reminiscent of several iconic action films from ‘The Driver’ to ‘The Transporter’. But Wright finds a way to make the movie’s standard narrative feel unique both through his style and how character driven it is. Wright populates his hyperactive world with hyperactive characters whom may not be complex (which is not for a lack of trying as a few small details shed some unexpected death on secondary characters) for the most part but they do have a distinct and memorable presence within the movie. They all have some kind of motivation and the way the dynamic of this cast plays out is unexpected as well as highly entertaining.


It helps that ‘Baby Driver’ has such a talented cast to bring these characters to life. Jamie Foxx emerged as a volatile and unhinged criminal, Kevin Spacey carries great authority with him as the mastermind of the numerous robberies, John Hamm and Eiza Gonzalez make for a great Bonnie-and-Clyde-like pairing and despite having just a few minutes of screen time Jon Bernthal gets a chance to shine as well. Even Lilly James who despite being somewhat flat as a character brings enough surface level charm to Baby’s love interest for us to feel invested. But the real star is Baby himself, as Ansel Elgort brings an almost indescribable detachment to the character that is both likable and mysterious. We understand his conflict of interest as well as his own struggles but we are also never left in doubt of his own ability and talent. Even amid an array of seasoned character actors Elgort steals the movie and marks himself as a star in the making.


Fresh and original but also pleasingly old fashioned in its method, Wright’s latest effort may lack a little depth but it’s stylish and hugely enjoyable.