Transformers: The Trainwreck So Far....

We have now lived through ten years of Michael Bay’s ‘Transformers’ franchise. Think about that for a minute, a decade of this soulless juggernaut of a franchise that repeats the same plot points over and over again whilst blowing up every conceivable object on the screen until your eyes are bleeding and your ears are ringing. Inexplicably ‘The Last Knight’ is looking to be the most ludicrously terrible of them all so naturally we should catch up on the others, it’s going to be a long day. 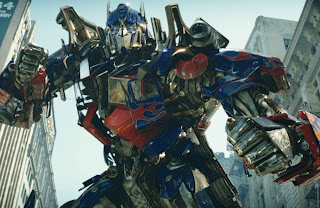 To some degree I feel bad for the first ‘Transformers’ movie. When I look back on it today I just see the foundations of all the horrendous atrocities that would follow over the next ten years. The problem is that Michael Bay enjoys escalation almost as much as he likes barely legal girls (is that going too far?) so every element of that first movie, whilst being acceptable in that context is mutated in the subsequent sequels because in Michael Bay’s mind, bigger always equals better. Giant battles that go on for what feels like an eternity, some mystical artefact that the Transformers have to locate, Sam’s awkward interactions with his parents. We didn’t raise issue with them when they were first used here, so we only have ourselves to blame that Bay took this as a sign that people wanted all of the above but to an even greater degree in the sequels.


But putting that aside, how does the first movie hold up as a singular work of cinema? Well, its fine I guess. There’s nothing particularly memorable about the plot or characters but I think this is the only movie in the franchise that understood how in a film of this nature, the plot is just a framework to hang action sequences on and the characters are just vehicles to take us to those action sequences so it’s best not to put too much emphasis on either. Despite being bloated with CGI the action scenes hold up remarkably well, they are mostly cohesive and decently paced. There is also a nice variety to them as well, with each subsequent sequence escalating towards the finale so that the audience are not burned out at the halfway mark (you could learn from this ‘Man of Steel’).


It goes without saying that the acting is far from stellar, particularly from Megan Fox who struggles to convey any kind of genuine emotion throughout the movie. Shia LaBeouf may have become an internet joke now but one of the things that struck me about ‘Transformers’ today is how surprisingly decent he is here, again it’s nothing spectacular but as an entry point for the audience his bumbling and awkward encounters are serviceable. So, uncomfortable racial stereotypes and watching John Tuturo getting peed on aside, ‘Transformers’ is perfectly fine. 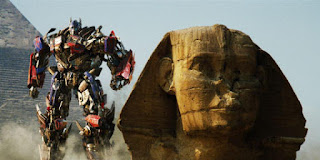 Oh how I wish I could say the same for the second instalment though. There are few things in the history of cinema that can match the terribleness of ‘Transformers: Revenge of the Fallen’. It truly is one of the most hateful, disgusting, crass, vulgar, nonsensical, insulting, poorly plotted, terrible directed, awfully paced, badly structured, vomit inducing piece of garbage anyone can have the misfortune to sit through. Unlike the first film, Bay chooses to film nearly all of his action sequences in intense close-ups, making his giant robot battles look more like two junkyards awkwardly having sex with each other. Mind you, it’s not as if I care given that you haven’t taken any time to actually distinguish any of these robots from one another, I’m watching an action scene with no idea who anyone is, why I should care or what they’re hoping to achieve.


Roger Ebert described ‘Revenge of the Fallen’ as “a horrible experience of unbearable length”, a quote that would go on to become the title of one of his books that features the legendary critics most scathing reviews. Ebert also said that if you want to save the price of a ticket then go into the kitchen, grab some pots and pans and slam them against your head for two and a half hours. The visual composition and sound design are beyond awful, creating this cacophony of head numbing nonsense. I could maybe tolerate 90 minutes of it, but ‘Revenge of the Fallen’ goes on for 150 painful minutes, a minute longer than it took Stanley Kubrick to span the whole of human existence in ‘2001: A Space Odyssey’, but I guess Bay’s story of robots punching each other requires more importance.


It truly is one of the worst movies I’ve ever seen and when one looks at its production it’s not hard to see why. Hampered by writer’s strikes and on set injuries, the film basically made up its own plot as it went along. It feels like they wrote the script on each day of shooting and then cobbled the events together in some haphazard filming process. But the thing is, one would think I might be more lenient given these production issues but the sheer laziness of how Bay chooses to deal with them is outright insulting. Don’t bother to wait and actually give the audience something they would find satisfying, just shove out whatever terrible dumpster fire you can and know that the audience will still see it because they’re morons. 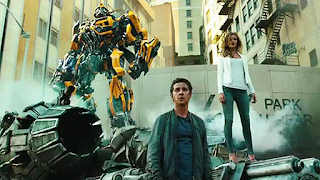 This brings us onto the third movie and in all honesty I’m running out of things to say about these movies since they’re all essentially the same so instead I want to briefly address the inherent problem behind Michael Bay’s filmmaking style. Despite having an idiotically simplistic plot, I repeatedly find myself struggling to tell what is happening when watching ‘Dark of the Moon’. One of the advantages of visual storytelling is that the director can decide which aspects of his film he wants to emphasise in order to gain the audience’s attention. Vital plot points, significant character moments and dramatically charged scenes can all be conveyed this way. But the given rule is that you don’t emphasise every single shot in this way because not only does the film feel exhausting and lacking in narrative coherence, but it confuses the audience over what they should be paying attention to and therefore creates a sense of complete chaos. It’s part of the basic filmmaking language that seems to escape Bay and it’s more prevalent in ‘Dark of the Moon’ than in any other movie of this franchise. You would be forgiven for thinking that Rosie Huntington Wheatley’s ass was a vital plot point because Bay’s camera lingers on it at every possible opportunity.


What struck me to even greater degree about ‘Dark of the Moon’ though, was just how boring most of it was. A plethora of job interviews, jealous boyfriends and government meetings weigh down the first half of the film, because how can we enjoy these movies about robots punching each other without being caught up in the delicate human drama of the films characters? It doesn’t matter anyway because none of them develop beyond the same tired and predictable clichés we have become used to at this point. The only thing the movie has going for it is the climatic action sequence which, while being impressive and fun for a certain amount of time, is drawn out, has no discernible stakes and abandons all laws of physics on the process. 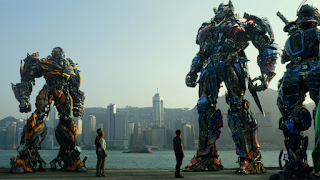 But now we have reached the epitome of laziness, the pinnacle of what it means to have nothing but utter contempt for your audience, the disaster that is ‘Transformers: Age of Extinction’. Despite having a new human cast the characters are as boring and bland as they come, as well as being utterly stupid in every way that fail to react even remotely similarly to an actual human being. Mark Wahlberg gives a laughably terrible performance as an inventor that constantly seeks to need to tell everyone that he is an inventor. They even cast the actress who plays Katara in ‘The Last Airbender’, so not only do I have to sit through a terrible performance but it’s one that reminds me of the single worst movie ever made (just typing its name made me throw up in my mouth a little), good job casting director.


Speaking of that hot girl character though (I feel like she has a name but I’m just referring to her in the same way I imagine the director did on set), the fact that Michael Bay chose to stop his movie dead in order to shoehorn in a scene explaining why it’s okay to be boning an underage girl still baffles me to this day.  That happened in a major motion picture, someone went out and wrote a scene justifying that and we were supposed to except it. I can tell you now that if I had a daughter and her boyfriend carried a laminated card with the necessary legal stature that allowed him to have sex with her in certain states, I’m going to go out on a limb and say I wouldn’t be best pleased. Why is this in a film? Why didn’t you just write it so that she is of age? Is Bay so obsessed with barely legal tail that he made one so barley legal that she can’t be banged in 49 states?


You can feel the sheer laziness of it screaming from every frame of the movie as well. From the fact that the Sears tower can be spotted in a set that’s supposed to be Hong Kong, to monitors being left green because no one could be bothered to composite footage over them and certain CGI effects not even being properly rendered. There is no way Michael Bay missed these mistakes, but left them in anyway because he simply doesn’t care. If you listen carefully in some scenes you can hear him yelling to his audience “Fuck you, you’re dumb, you’ll watch this anyway”. Of course like the others the plot makes no sense, the action scenes go on for what feels like an eternity, it’s full of racist and sexist overtones as well as the fact that it’s identical to the previous three. So yeah, not great.
Posted by Joshua Price at 16:47