If you loved Pixar movies like ‘Inside Out’, ‘Ratatouilles’ and ‘Up’ then I’m afraid you also have to suffer through the movie that paid for them all. Yes I know that’s a joke from Honest Trailers but it’s so accurate that I had to paraphrase it here. ‘Cars’ may be an above average kid’s film but it’s a cut below the rest of Pixar’s oeuvre to say the least (their previous effort had been the masterpiece that was ‘The Incredibles’) but ‘Cars 2’ is simply awful and by a wide margin the worst film of the animation powerhouse’s history. So as expectations go ‘cars 3’ is tough to pin down.


Blindsided by a new generation of blazing-fast cars, the legendary Lighting McQueen (Owen Wilson) finds himself pushed out of the sport that he loves. Hoping to get back in the game, he turns to Cruz Ramirez (Cristela Alonzo), an eager young technician who has her own plans for winning. With inspiration from the Fabulous Hudson Hornet (Paul Newman) and a few unexpected turns, No. 95 prepares to compete on Piston Cup Racing's biggest stage.


Unlike the previous two movies in this franchise, ‘Cars 3’ seems to have worked out that this is basically a sports movie, so they should just focus on that. So in that regard ‘Cars 3’ is perfectly fine, it’s not nearly as atrocious as the second but at the same time there is a distinct lack of originality from it that just feels so out of place when put next to the Pixar logo. It’s generic and aims to please kids, but never reaches the heights of what we are used to from Pixar or what that very first trailer for ‘Cars 3’ suggested this might be.


Once upon a time, Pixar felt like they were making films that were wholly unique and I don’t just mean that as just an original screenplay. I mean that they felt like a truly distinct concept and execution that felt important and meaningful, they were stories that feel unique to them medium of animation through which they are told. They have a reason to exist beyond just selling toys and ‘Cars 3’, like its predecessors doesn’t really do any of that. One could argue there is an unfair expectation attached to this movie which is why I’m going to say it caters to its fans perfectly well, anyone who enjoyed the first two movies of this franchise is almost certainly going to enjoy this one as well. 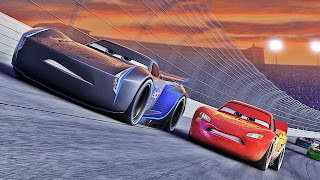 While the story is straightforward and predictable its execution is decent enough. While the world this takes place is the most shallow and least interesting one Pixar have come up with (though based on what they have neglected to explain it’s the most fascinating, what they’ve offered in the movies has been nothing special) the stakes are easier to grasp this time around. Rather than a convoluted redemption or spy plot this is the simple underdog story that plays out in a standard three act structure. Whilst the first act is almost tiresomely predictable and the third act is painfully slow, the cathartic third act is pleasing enough to make the rest of the film feel at least passable, or at least worth sitting through to get there.


One could criticise the movie’s story for being little more than a collection of tropes from other sporting movies, and I will. But at least Pixar uses the aesthetic of this weird world to put some kind of mildly interesting twist on it. At the very least it’s an angle that might occasionally wake up the board parents while the children were distracted by the bright colours and loud noises. The most annoying thing about that statement is that Pixar have proven time and time again that they take their child audiences seriously, but here it feels like they were almost frightened to travel too far into emotional territory and changes gear by including some wacky action scene, or have Larry the Cabel Guy do something “funny”.


There is a surprising amount of character depth to be found in ‘Cars 3’, not just from the main character that is McQueen but also his trainer Cruz whose backstory makes for a mildly compelling dynamic. The annoying characters of the franchise’s past are kept at a safe distance while the interesting ones are appropriately expanded upon. I can’t even fault the voice actors wither who give each character a distinct personality and are mostly likable enough to watch for 90 minutes or more. Admittedly it is hard to take the characters own personalities seriously when a series of questions concerning how this world works exactly were still boggling my mind. How is this computer science seen as an unwelcome and mechanical future if they’re all mechanical beings anyway? What constitutes the differences between the genders of the cars? What is aging to this world when everyone can have any body part interchanged at any point?


Predictable and formulaic, if not enjoyable for younger audiences, ‘Cars 2 is basically exactly what you were expecting it to be.