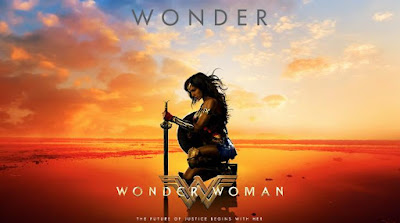 "Be careful of mankind Diana. They do not deserve you."

So to say ‘Wonder Woman’ has some pressure on it is somewhat of an understatement. Not only is it expected to live up to the expectations of being the first major female led superhero blockbuster in over a decade, then you take into account that in the 75 year history of the character this is her first solo outing. It also has to get a franchise back on the right tracks after what has so far felt like watching a slow motion car crash that you’re powerless to stop. It has to hit everything correctly, working on its own but also suggesting that there could be hope for the broader future.


Before she was Wonder Woman (Gal Gadot), she was Diana, princess of the Amazons, trained to be an unconquerable warrior. Raised on a sheltered island paradise until an American pilot (Chris Pine) washes ashore and tells her about the massive conflict that's raging in the outside world. Convinced that she can stop the threat, Diana leaves her home for the first time. Fighting alongside men in a war to end all wars, she finally discovers her full powers and true destiny.


I couldn’t help but be sceptical of ‘Wonder Woman’. Even when one ignores the track record of the DCEU nothing about Wonder Woman’s role in ‘Batman v Superman’ had me excited for a solo outing. Then there’s how unproven Gadot is as an actress, and even if Patty Jenkins did manage to make a good movie Warner Brothers might just do to her what they did to David Ayer’s ‘Suicide Squad’ and ruin the whole thing in the process. However, turns out I was completely wrong and I’m so happy about it.


‘Wonder Woman’ is a terrific superhero movie that’s made to feel all the more meaningful by what a cultural touchstone it is. Granted we have seen female led superhero movies before but never of this size and never of this quality. It’s a rousing spectacle that evokes awe and inspiration when it needs to but never fails to deliver on being a story about one character’s journey to discover herself. I think a lot of this has to do with the tonal consistency of it. So far the DCEU has struggled to balance its tone so that any attempt at comedy falls horribly flat, and we’re reminded of how depressingly bleak and unrelenting the rest of the movie is. ‘Wonder Woman’ is different, it knows how to maintain a consistent tone and feel that means the director can convey many different emotions while balancing the film as a unified whole. The humour feels organic to the situation, as does the action, drama and any other conflicting mood.


The fact that the film’s humorous moments work is somewhat amazing given its setting. It does a superb job of conveying its thesis about the horrors of war while also adding a broader sense of appeal. If anything, those moments of bleakness only make the more rousing feats of heroism all the more impactful. To see the colourful and hopeful Wonder Woman soar amongst this backdrop of violent desolation is a brilliant contrast. It’s little wonder that many have compared this to Richard Donner’s ‘Superman’ because it really does have the same mythic and timelessly heroic quality that Christopher Reeve’s man of steel did. 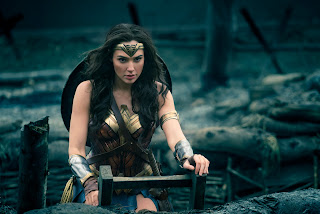 Speaking of colour, the whole movie radiates with it. Of course that’s not to say they crammed neon colours into the frame but the way the cinematography illuminates the movie makes it visually spectacular. There is a great sense of depth to each set piece and I’m sure that is due to Patty Jenkins having a great understanding of narrative framing and visual storytelling. Each shot complements the characters, informs the audience of what they are witnessing and further conveys a mood to them. Though she employs slow motion, tacking shots and fast edits they usually feel motivated rather than just a gimmick to light up an otherwise dull scene. Nearly all of them fit the tone of the movie and enhance what it is trying to say.


As far as Jenkins’ direction goes, I can only fault her for a few edits that lacked a little cohesion and some dodgy green screen shots in the first act. In fact the first act as a whole drags a little but that could be a testament to how well Jenkins establishes Diana’s character and environment that I want to further expand the movies universe within fifteen minutes. Though the rest of the narrative is hardly ground breaking (and overtly familiar with another shield wielding superhero origin…) the execution is superb, firmly establishing our heroes, villains and story. Also if you’re as dumb as I am said narrative might supply one or two surprises for you.


As I said earlier Gal Gadot did not instil confidence in me, but surprisingly she is excellent in the lead role. Whether it’s the fact that she happens to perfectly embody this particular character or the fact that she’s under the direction of the woman who crafted Charlize Theron’s performance in ‘Monster’, Gadot soars here. She begins with this nativity and determination that makes Diana an instantly empathetic character, but as the movie progresses you can see her clear development as a character that never seems to falter, even in the more dramatic scenes. She’s also backed up by a great supporting cast in the form of Chris Pine, Robin Wright, David Thewlis and Ewan Bremmer.


As I said before, ‘Wonder Woman’ may not be a game changer in terms of its genre, but by executing it so brilliant Patty Jenkins has crafted a film of timeless heroism. It’s not difficult to imagine young girls across the world looking up to this hero and that’s worth being admired, but to be honest ‘Wonder Woman’ is excellent enough for anyone to look up to the character. It really is that good.


A soaring triumph that balances action, drama, humour and feats of great heroism in a terrific superhero blockbuster for all.