"You either make the change that will forever alter your life, or drown in your own security." Alec Baldwin was in ‘Glengarry Glen Ross’, a movie that Baldwin, despite only being given five minutes of screen time, managed to leave such an impression with his performance that he outshone the likes of Al Pacino, Jack Lemon, Kevin Spacey, Alan Arkin and Ed Harris. Demi Moore was in ‘About Last Night’, a movie that was awarded a full four stars from Roger Ebert. I’m just reminding you of the good things these actors have done since it is hard to recall those accomplishments after seeing ‘Blind’.


Bill Oakland (Alec Baldwin) is blind novelist dejected by the mounting misfortunes he has suffered. However he gradually begins to rediscover his passion for life and writing when he embarks on an affair with the neglected wife (Demi Moore) of an indicted businessman (Dylan McDermott) but as the situation becomes more and more complex, their relationship must find a way to move past these impending trials.


So every now and then some Lifetime Channel movie, by some weird coincidence, means of blackmail of kidnapping, manages to bag a semi-decent star for their movie and manage to cobble together enough sappy clichés to make a movie with a runtime more in line with what one might expect from an actual film. They then somehow manage to release it in cinemas where it will be seen by approximately no one but still make money because the only alternative was to release it on Television anyway. Having done no research into the production history of ‘Blind’ I would guess that to be its origin, but even if it isn’t it makes no difference since the quality of the movie is exactly the same regardless.


If you told me this movie was made 20 years ago, released straight to VHS and only recently resurfaced, not only would I believe you but it would make the entire torturous ordeal make much more sense. ‘Blind’ parades one tired cliché that would have been outdated 20 years ago after another until it becomes so easy to predict exactly where the movie will go, devaluing any attempts at dramatic tension. Actually, I say that one can predict the movie but only the bare foundations of it. The small detours the narrative takes along the way feature the characters reacting to events in a way that no rational human being would. If you want to talk about empathetic characters then ‘Blind’ is the anti-thesis of how to create them. None of the characters have any discernible motivation for what they do nor any redeeming quality to draw sympathy from. They each fit into an allocated role and stay there, with no depth, complexity or even the slightest bit of interest.


Now, had this been a different kind of movie then the cold, distant and incomprehensible characters might work. But when you are making a sappy melodrama that tries to manipulate its audience’s emotions then the least you could hope for are characters that are mildly engaging to watch, at least engaging enough to forget the crushing realities of life. But if anything ‘Blind’ only made me wish for those crushing realities even more. As I said at the beginning of this review, the movie features a cast that at least during one point of their careers, talented. They’re given so little to do beyond reading from a screenplay so contrived and artificial that you may be forced to wonder whether it was written by a person or an algorithm that they remain completely flat and bland. 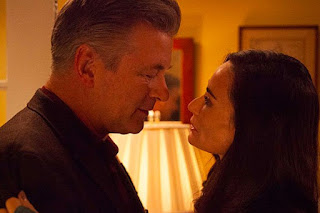 In fact, speaking of flat and bland, let’s talk about the direction. The entire construction of the film feels uninspired, never once forming an image that feel evocative or engaging. I can’t necessarily fault the direction as it still conveys each narrative element effectively but at the same time there is so little within it that I found my eyes involuntarily straying away from the screen itself. Nothing draws the viewer in. There is no style to elevate this paint by the numbers story and when the more dramatic moments do unfold the direction still remains at the same dull tone, making it even more difficult than it already was to even feign a mild sense of involvement with the movie.


Also, for a movie called ‘Blind’, it does very little to actually portray a blind character (or the disability itself) in any meaningful light. All we can gather about Bill Oakland is that he’s a bitter man who shouts abuse at those who try to help him, except for Demi Moore because….reasons. It does nothing to give us a genuine connection with the character and his affliction almost feels like an afterthought, as if the script was already written but the makers realised they would need some kind of hook to pitch it. Again, had this been a different kind of movie then I might not be criticising it as much, but in this they called the movie ‘Blind’ and yet they seem really uninterested in the fact that their main character is blind.


Boring and uninspired, ‘Blind would be lucky to find a second life as a TV movie.