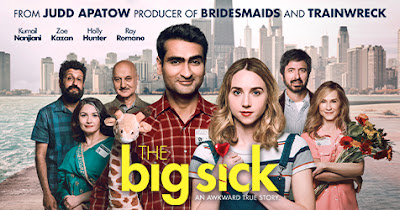 "Let me give you some advice, love isn't easy. That's why they call it love."

In recent years, romantic comedy has unfortunately been stigmatised as the genre where convention and surprise go to die. The standard boy meets girl, boy falls out with girl, boy rushes forward at the last minute to confess his love and a happily ever after, story structure has been done to death. While there was some invention to be found in gender swapping the whole process it was not long before we were back at square one and slated with another bunch of uninvolving, contrived and stagnant movies. But Sundance breakout ‘The Big Sick’ is different.


Kumail (Kumail Nanjiani) is a Pakistani comic who meets an American graduate student named Emily (Zoe Kazan) at one of his stand-up shows. As their relationship blossoms, he soon becomes worried about what his traditional Muslim parents will think of her. When Emily suddenly comes down with an illness that leaves her in a coma, Kumail finds himself developing a bond with her deeply concerned mother and father.


It is a bold move to end the first act of a romantic comedy with not only the breakup of the couple that were at the centre of the story but also one half of that couple falling into a coma, but ‘The Big Sick’ is a bold movie in an enjoyably subtle way. Just the fact that half of that couple is a Muslim of Pakistani origin and the subsequent issues of cultural difference that arise when they meet each other’s parents is an intriguing enough approach as it stands.  What makes the whole thing even more remarkable is that the screenplay by Nanjiani is based on his real life romance with the film’s executive producer Emily V Gordon.


Despite its convention defying premise, what makes ‘The Big Sick’ particularly remarkable is how it never plays into the melodrama that it could so easily stray into. Lesser romantic comedy’s turn such trivial plot elements into major story beats but Nanjiani’s screenplay allows the human elements of the story to shine through its moments of high drama. It’s a script that takes joy in observing the more sobering aspects of the story it is telling and never feels to need to manipulate its audience into feeling a specific emotion, instead opting to portray the characters in a way that feels honest and consistent with the rest of the movie.


The result of this is even the heavier aspects of the story feel light and manageable. It challenges our expectations in regards to how we think the story will play out but also grounds it in genuine emotions that make it feel familiar. This is no surprise given that the film is produced by Judd Apatow, a man whose storytelling is renowned for tracing the humane elements of its narrative rather than the premise itself. Unfortunately, like a traditional Apatow vehicle ‘The Big Sick’ occasionally overstays its welcome, running just a bit too long but still being a thoroughly enjoyable ride in the process. 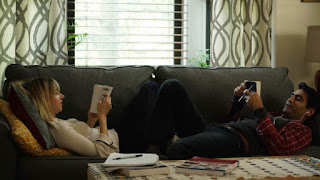 In fact, which a film like this, a slightly too long runtime is far from the worst thing that can happen. The characters that we get to spend time with are all relatable and sympathetic, creating a welcome dynamic of being involved in their conflict whilst understanding every side of the argument. Characters are hesitant to embrace other cultures not necessarily because they are closed minded but because they are set on certain traditions and have planned their lives according to those traditions to the extent that any deviation from said plan makes things uneasy.


These characters in question are all portrayed brilliantly by the supremely talented cast. Nanajiani showcases his charisma and charm as a leading man. Despite being unconscious for a significant portion of the movie, Zoe Kazan is immensely likable and empathetic as Emily. The supporting turns from Ray Romano, Holly Hunter and Adeel Akhtar only serve to make the story even better as their characters are not broadened into one specific trope. There’s no character that feels there specifically to be funny or expositional, they all have their fair share of funny, heart wrenching and complex moments.


Having arrived on the scene as a promising director with another darkly subversive romantic comedy ‘Hello, My Name is Doris’, director Michael Showalter takes a nuanced approach to brining Nanajani’s screenplay to life. His direction definitely has an intimate feel to it that places us directly within the dynamic of the characters in question. Though it is easy to overlook, I think Showalter’s direction is an intrinsic part of what makes ‘The Big Sick’ feel so involving. He also understands the screenplay’s need to absorb the quitter moments of this story and his direction is sure to draw attention to them whilst also navigating each scene in a tone that feels appropriate. It may not be the most visually involving approach but it highlights the strength of the already fantastic screenplay.


‘The Big Sick’ brilliantly mixes humour and heartbreak to create a surprising, subversive but also familiarly welcome story of love.