Valerian and the City of a Thousand Planets

"We need the two of you to be the guardians of our future."

No other movie this year, or in fact in recent memory for me, has had a higher ceiling or a lower basement of expectations than Luc Beeson’s ‘Valerian and the City of a Thousand Planets’. Watching the trailers, footage and stills I see the potential to be on the same level as the masterful ‘Mad Max: Fury Road’ but also the terribleness of ‘Jupiter Ascending’. Based on a highly influential science fiction comic book, I went into Beeson’s film with literally no idea of what to expect beyond what promised to be a highly unique experience at the very least.


In the 28th century, special operatives Valerian (Dane DeHaan) and Laureline (Cara Delevingne) work together to maintain order throughout the human territories. Under assignment from the minister of defence, the duo embarks on a mission to Alpha, an ever-expanding metropolis where diverse species gather to share knowledge and culture. When a dark force threatens the peaceful city, Valerian and Laureline must race against time to identify the menace that also jeopardizes the future of the universe.


One danger of adapting a highly influential science fiction novel is what I like to call the ‘John Carter’ effect, wherein there is nothing inherently wrong with your adaptation itself, but the source material is so highly influential and has been cherry picked by so many others that the once unique elements now feel formulaic. We saw a similar thing happen to ‘Ghost in the Shell’ earlier this year. Luckily ‘Valerian’ manages to avoid this purely thanks to Luc Beeson’s sheer creativity as a filmmaker combined with his directorial style that is unlike anything else currently in cinemas.


Beeson possesses an ability to breeze through the most mind boggling ideas and utilise them in a way that ensures the pace and tone of his films never grows stale (as long as you forget that ‘Lucy’ happened). As Beeson demonstrated in ‘Leon: The Professional’ and ‘The Fifth Element’ his sheer energy and creativity allows him to showcase more brilliant ideas within a single action set piece than most blockbusters, in fact more than most franchises possess nowadays. The opening scene of exposition alone is some of the finest auteur filmmaking on a blockbuster scale, being a cacophony of imaginative, inspiring and involving pieces of storytelling. 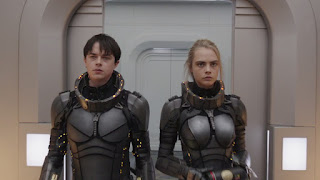 It also helps that ‘Valerian’ is well and truly a visual masterclass from start to finish. Alongside his usual cinematographer, Thierry Arbogast, Beeson brings forth a colour palette that dazzles the viewer for ever frame of the movie. Do not be mistaken for a second, on a purely visual level ‘Valerian’ is one of the finest spectacles you are likely to see on the big screen this year, a spectacle the feels completely and utterly like the product of an impassioned visionary. It’s no surprise that Beeson funded the entire movie through personal and crowd funding, making this the most expensive independent film of all time, no studio would allow a director to be this creative or expansive on visual level.


Inevitably though, ‘Valerian’ does have some issues as far as its broader construction goes. It relies so much on spectacle during the first act of the movie that by the time it reaches a stage where the narrative needs to support said visuals and act as the driving force of the movie it’s not up to the task of doing so. It starts to slow down and without substantial characters or a more intricate plot I had little reason to be as involved within the story beats once the amazing visuals became part of the normal proceedings. Perhaps if Beeson had shown less restraint during the movie’s first act he would have more interesting elements to introduce later down the road but instead the movie’s second half, which is by no means bad, just feels less involving.


Another issue are the two main actors. Cara Delevingne and Dane DeHaan are perfectly fine in their roles and has the movie’s script treated them as nothing more than vehicles to take us through this journey they would have filled their roles perfectly. But the movie feels the need to dive into their relationship and inner workings in a way that feels like it assumed I was actually invested in them, which I was not. DeHaan and Delevingne seem to lack to necessary chemistry to make their interactions seem especially intriguing, especially when the focus of a scene is on their dynamic. Beeson has never been known as an actor’s director so it seems hardly surprising that his actors can’t quite connect in the way they might under the direction of someone not concerned with world building and spectacle. If anything the fact that more Rhianna is able to steal the scenes in which she is in stands as a testament to how well ‘Valieran’ crafts its characters for a short period but not a sustainable length of time.


Inspiring and imaginative beyond belief, but somewhat lacking in the narrative department, ‘Valerian’ is still worth seeing for its visual splendour alone.