Full Metal Jacket: The Soldier in the Syetsm 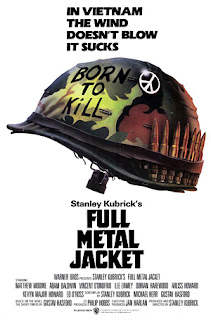 Something that I always admire about Stanley Kubrick (as well as just, well, everything) is his versatility. Kubrick never made the same movie twice, he never repeated himself and he never felt the need to close any loose ends. One can look at his body of work and need only describe each film in the broadest possible terms to highlight how different they are. A dark comedy, a film noir, a historical epic, a science fiction movie, a horror and an erotic thriller. The only genre he revisited was that of war, but even then his films within the genre are radically different both in style and subject matter.


‘Paths of Glory’ was released in 1957 and in it Kubrick brought us into the trenches of WW1, an empathetic tragedy that depicts a Colonel attempting to defend a group of soldiers who are under threat of being court martialled for cowardice. It’s evidently an early film within Kubrick’s career, much more humanistic than his later efforts as well, being much less ambiguous as the story of individuality wears its anti-war sentiment on its sleeve to highlight the pointlessness of war. It stands in stark contrast to ‘Full Metal Jacket’ which was Kubrick’s penultimate film as he died just days after completing ‘Eyes Wide Shut’ in 1999.


Though it is set in the Vietnam War and naturally has a very different style and tone to ‘Paths of Glory’, its entire thematic conceit is wildly different. Whereas before, Kubrick went to great lengths to humanise his fighting soldiers, the very first frame of ‘Full Metal Jacket’ seeks to strip man of his humanity. Despite being set in Vietnam the film’s intent is to focus upon the very system of war itself, the dehumanisation of man and his increasing separation from all that tethers him to a civilised society. As Gunnery Sergeant Hartman states to his soldiers “Here you are all equally worthless”.


The first and last hint of any real identity we see from a character other than Private Pile (more on him later) is from Private Joker and it is quickly snuffed out by Hartman. Though he earns his drill sergeants respect, Joker clearly still has no place from which to be anything other than a cog in the machine. One would argue that Hartman’s job, more than the actual training of the men, is to emphasise how they are merely part of a system and no longer an individual. He tells them that the Marine Corp will live on regardless of the soldier’s deaths, he moulds them into identical machines. Critics of Kubrick have referred to him as being cold or clinical, without seeming to realise that both those qualities are exactly what the director wanted to achieve.


Every frame of the movie’s first half is composed to stress this dehumanisation process and show how it gradually takes hold over all of the men there. Kubrick’s symmetrical framing and evocative images cement this concept into our minds. We watch the men becoming better soldiers but at the same time straying further away from any identity they had at the beginning of the process. Kubrick’s intent is not to show the individual nor any trace of humanity. He wants to show us the machine slowly engulfing the men, taking control and reducing them to components that will bend to the will of whoever controls them. 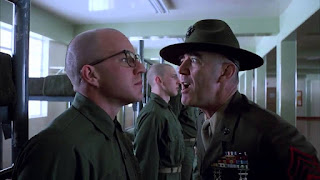 In this case that controller happens to be Sergeant Hartman, whose control over the movie is designed to reflect his control over the lives of his soldiers. His voice seems like an ever present element of the movie’s first half of the movie, a constant factor that asserts its dominance in every scene. It is little wonder that R Lee Ermey was typecast as figures of authority following the movie’s release because his commanding tone is about as controlling as they come, due both to his performance and the way Kubrick uses him. Hartman is a traditional god-fearing, Marine loving American soldier. He seems actively disgusted when Joker reveals that he wants to work for the war press rather than be a soldier. As Hartman puts is “You’re not a writer, you’re a killer”, writers express individuality, killers under his regime don’t.


Of course, this system has no room for a screw that does not fit and ‘Full Metal Jacket’ has just that in the form of Private Pile. Vincent D'Onofrio gained 70 pounds for the role, breaking the record previously set by Robert De Niro for ‘raging Bull. Like all of Kubrick’s requirements it was specific and essential to the director’s vision. D’Onofrio’s weight gain means that as soon as Pile is seen in the film, the audience can tell he does not look like a soldier, nor does he act like one. He fails to adapt to the system and does not improve to benefit that system. As the other soldiers improve and make fewer mistakes within the course of their training, Pile repeatedly fails to match the standards of his sergeants, exposing the man within the soldier. Eventually Hartman resorts to punishing the unit for Pile’s mistakes, isolating him from his fellow soldiers and further emphasising how he does not belong within this ever moving machine.


But then, as it looks as if Pile is finally about to break, the regime starts to affect him. He still does not fit into the machine but he can at least mascaraed as being a part of it. Kubrick frames him a number of intense close ups to signify that something is very wrong within Pile internally. Hartman gives examples of Charles Whitman and Lee Harvey Oswald as skiller marksmen who were trained by the Marines. He credits them as a testament to what “one marine and his rifle” can do, without realising that both were unhinged members of their machine. Each man made history by lashing out at what they perceived to be their enemy. Hartman is unwittingly describing the conditions of his own death there and then. When Pile murders Hartman it is not out of rage or revenge, but simply the fact that the system succeeded in turning Pile into a soldier. But the only enemy he knew was his abuser, sergeant Hartman. Then with the enemy defeated, for Pile the war is very much over.


However, the film ploughs on as Kubrick takes us to the heart of the Vietnam War shortly after. While some see this aspect of the film as the weaker half, I believe it is part of Kubrick’s masterstroke in his portrayal of war and its condition on the human spirit. Having witnessed the scrupulous syetm rob these men of their identities in the first half, we see the complete breakdown of that system in the second. Here the soldiers are driven to act impulsively. It’s here that the identity of Vietnam and its hypocrisy bleed into the film’s main thematic point. It’s a stark contrast to the measured approach of the first half, where Kubrick’s static shots are replaced by an ever moving camera to reflect the lack of control. 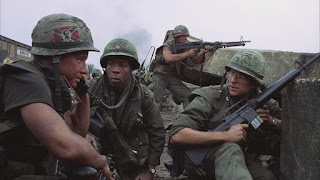 Throughout his time in Vietnam, Joker attempts to be more than just a singular entity. He wears a Peace symbol on his jacket, yet has “Born to kill” written on his helmet, a gesture to show the duality of man but one that baffles his superiors who tell him to get with the programme. In that very same lecture an officer tells him that their purpose in Vietnam is to help the Vietnamise, yet just minutes earlier we saw a soldier gunning down civilians as he regards them all to be either VC’s or well-disciplined VC’s. Amid the chaos of Vietnam the system the marines are taught to obey is proven worthless. Any sense of unification they had is decimated. Their squadron, equipment and tactics are broken. Is the American cause that they represent also broken?


In fact it’s here where Kubrick does actually start to echo some of the themes he established in ‘Paths of Glory’. In that film his soldiers were insignificant, fighting for a worthless piece of land. In ‘Full Metal Jacket’ the soldiers spend a good chunk of the film pinned down by an enemy sniper. They pointlessly and all the survivors have to show for it is the death of their enemy, who in this instance happens to be a teenage girl. But what does all this amount to, what does it want to say in the end?


The simple answer is that Kubrick was not interested in the morality of war no did he want to make another human drama with ‘Full Metal Jacket’. Vietnam and its aftermath were explored in many films prior to ‘Full Metal Jacket’ but Kubrick’s approach was a unique blend of brutal realism and dark satire. He demonstrates the breakdown of humanity within the film’s first movement and then uses the second half to question the futility of such a sacrifice.