"We're kind of in another save the world situation."

I must admit I was very hesitant when it was announced that 2015’s surprise hit ‘Kingsman: The Secret Service’ would be getting a sequel. Mainly because the last time a Matthew Vaughn movie got a hastily planned sequel, we ended up with ‘Kick Ass 2’. But then again Vaughn didn’t direct ‘Kick Ass 2’ and yet he had chosen to return for the sequel to ‘Kingsman’, so surely he must have thought it worth returning? Surely he had a story worth telling if he wanted to return?

With their headquarters destroyed and the world held hostage, members of Kingsman find new allies when they discover a spy organization in the United States known as Statesman. In an adventure that tests their strength and wits, the elite secret agents from both sides of the pond band together to battle a ruthless enemy and save the day, something that's becoming a bit of a habit for Eggsy (Taron Edgerton).

It crushes me to say this but I feel like I have to get it out of the way at the start, ‘Kingsman: The Golden Circle’ is the biggest disappointment of this year. It feels less like a sequel and more like a fan film put together by someone who completely misunderstood what people liked about the first film. Yes it has the same tone, over the top genre conventions and hyper stylised action sequences. But beyond that it seems to have forgotten all of the heart, substance and meaning that made the first one as great as it was.

First and foremost, every single character in this movie is completely static. They do things and are a part of the plot, but in terms of development, progression and empathy, none of the characters possess an ounce of it. They’re either over the top caricatures or vehicles designated to take the audience from one set piece to another. Having gone from an underdog to a superspy in the first movie, Eggsy is now just an empty shell of a character with nowhere left to go. It’s supremely talented cast feel utterly wasted. Despite the fact that the advertising made such a big deal over Colin Firth’s return the script gives him nothing to do. His role as mentor to Eggsy is redundant, he serves no purpose to the main plot of the movie and his presence undermines the role he played in the last movie. The screenplay seems burdened by the very character is struggled to reincorporate.

Then you have the much hyped Statesman, who feel even more underutilised. Channing Tatum, Halle Berry and Jeff Bridges all show promise with their characters but are disregarded before they can be developed or used in any meaningful way. There is simply too much going on in one movie for the screenplay to give adequate time to each element. Even Julianne Moore can’t make an impact as her villain remains rooted to the same location for the entire movie, robbing her of any menacing presence. 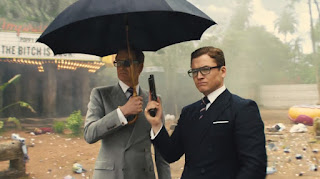 I will say that what ‘Kingsman: The Golden Circle’ lacks in substance it has least provides what you would hope for when it comes to style. Matthew Vaughn has a keen eye for well composed action sequences that are visually dazzling to behold. The colours are vibrant, the contrast is excellent and his incorporation of stylish tropes like slow motion and such serve to make each action set piece feel energetic enough. The only problem is that the music that accompanies these scenes are…odd to say the least. It’s not that the music is bad it’s just that it does not fit the tone or style of these scenes at all.

Despite being jam packed with inventive action sequences and entertaining pieces of spectacle, the  plot is lacking any reason for the audience to care that much. It’s another “save the world” scenario like the first. The only difference is that in ‘The Golden Circle’ none of the characters are allowed to progress or develop, none of them feel integral or involved within the plot and every narrative beat feels redundant or predictable because we’ve seen the first movie.
By building its narrative around its protagonist going from an underdog to a superspy it had some emotional weight to tie its lucrative narrative together and something to ground it in character. There is nothing that even comes close to doing either of those in this sequel, rendering every action scene as nothing more than empty spectacle that makes the classic sequel mistake of assuming that bigger is automatically better. In that regard they dial up every element to 11, from the action scenes to the tasteless jokes that were forgivable if not very awkward in the first one, but now have entire uncomfortable scenes devoted to a one note joke that is guaranteed to make you squirm in your seat.

‘The Golden Circle’ misunderstands what people liked about its predecessor, delivering most of the style but with none of the substance.