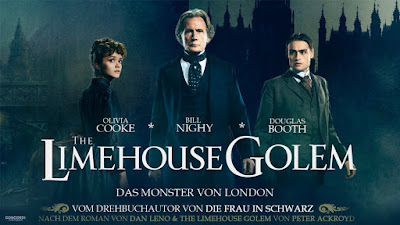 "He who observes spills no less blood than he who inflicts the blow."

We tend to have an enduring fascination with 18th century murders. Obviously one could attribute that to the reputation of Jack the Ripper but it’s amazing how that stigma carries over the any vaguely similar premise. The advertising for ‘The Limehouse Golem’ almost looks as if the film thinks it’s exploring a real murder case or something that’s been whispered throughout our society, as opposed to what it is which is a weird name for a fairly vanilla movie.


Victorian London is gripped with fear as a serial killer is on the loose and leaving cryptic messages written in the blood of his victims. With few leads and increasing public pressure, Scotland Yard assigns the case to Inspector Kildare (Bill Nighy), a seasoned detective who has a sneaking suspicion that he's being set up to fail. Faced with a long list of suspects, Kildare must rely on help from a witness to stop the murders and bring the maniac to justice.


For a film of this nature to work, two things have to happen. We have to be invested in the central mystery that drives the narrative and we have to feel involved with the plights of the characters. The plot has to create intrigue and suspense in the way it unfolds and sadly that quality is distinctly lacking from ‘The Limehouse Golem’. It seems so desperate to try and mislead its audience that it never puts any thought into whether or not said audience would actually be interested in the plot. It takes many twists and turns but they all feel contrived, never coming across as a meaningful creative decision that furthers the narrative of the characters.


What this subsequent half-hearted mystery so disappointing is the fact that ‘The Limehouse Golem’ actually starts rather promisingly. It establishes its characters as somewhat intriguing individuals that I expected them to uncover more as the movie progressed. But that never transpired. As I said the movie is clearly far more concerned with trying to fool its audience rather than actually convey anything remotely complex or meaningful. The characters are never fleshed out or developed, things happen to them but as far as their own psychology goes there isn’t any major change that justifies the story. There’s no larger commentary, no major theme, just one convoluted twist after another that drives the movie on and on.


All in all the movie feels like a script for an episode of a long running detective show that has been padded out. The twists in question don’t feel riveting since they are conveyed to the audience through the most uninspired methods. Whether it be broad exposition or generic flashbacks, one of the narrative beats are allowed to unfold naturally or left for the audience to ponder over. A character works it out, they tell to the audience, the film takes us there, the hunch is wrong, next scene. 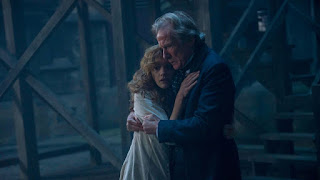 It goes about eliminating suspects methodically, but the problem with executing a mystery this way is that you can’t get past the audiences own expectations. If a character is being addressed just half an hour into the movie we subconsciously know he can’t be the killer since we would not have a subsequent movie. That’s not to say of course that some brilliant films haven’t subverted these expectations, but ‘The Limehouse Golem’ is not that movie. It chooses to plough through each suspect as formulaically as possible until it arrives at a conclusion that most people in the audience will probably be able to predict.


The movie can’t even seem to nail the details of the period in which it is set. Rather than actually make its time frame feel essential to the narrative, ‘The Limehouse Golem’ could honestly be taking place at any time. The only difference would be that the screenplay wouldn’t be able to include Karl Marx as one of the suspects. If you’re thinking that such an inclusion might pave way for some deeper themes relating to said historical figure, then you would be wrong because as a character Marx is here one minute and gone the next without any bearing on the plot itself.


Putting aside all of these writing issues, nothing else really feels inspired within the film. I can’t single anything out as being awful but I also can’t really commend it either. The performances from Bill Nighy and Olivia Cooke are solid, despite not being given much depth to work with, they endow the characters with distinct traits that make them easily identifiable. Under the direction of Juan Carlos Medina none of the environments within the movie stand out, nor do the frames or compositions ever feel evocative. They’re competently shot but they never inspire any sense of intrigue or mystery, they never serve to draw me into the narrative or visually represent the characters.


‘The Limehouse Golem’ is a generic murder mystery that could be entertaining for fans of the genre, but never remotely outstanding.