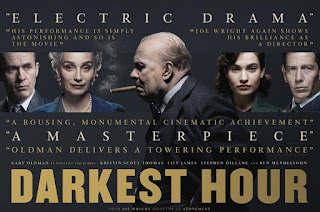 "You cannot reason with a tiger when your head is in it's mouth."

Gary Oldman as Winston Churchill, now there’s a casting call that has awards written all over it right? While Oldman has been acclaimed for years as one of the best character actors in the world, he seems to have eluded the consideration of many major awards until recently. Maybe his choice of roles are too left field to be awards contenders or maybe he’s just unfortunately relegated to the supporting role too many times, but for whatever reason it’s taken the world this long to finally start taking his work into account.

At the precipice of World War 2, just days after becoming Prime Minister, Winston Churchill (Gary Oldman) finds himself facing a crisis as he and the rest of the nation are caught on a crossroads between whether to concede and begin negotiations for a peace treaty with Hitler’s Germany, or stand and fight against the tyrannical force sweeping across Europe. With everything weighed against him, Churchill must face rally a nation, face his darkest hour and attempt to change the course of global history.

What these kind of biopics tend to do is provide an actor with a platform to really showcase their talent in bringing a world renowned figure to life. The downside to almost all of these biopics though is that when you take away whatever phenomenal performance lies at its centre, there really isn’t that much to lose your mind over when it comes to the rest of the movie, and ‘Darkest Hour’ is no different. That’s not to say it’s a bad movie by any means as it is still very well crafted and competently executed, but it seems like something that would be equally as rewarding when viewed on a  laptop screen as it is when projected on a giant cinema.

I confess to being a little disappointed since I hoped that director Joe Wright may have been able to bring something extra to the table when it came to this story. His single shot sequence showing the Dunkirk evacuation in ‘Atonement’ was truly phenomenal but sadly there isn’t anything as visually dynamic or as cinematically bold to be found within the direction of ‘Darkest Hour’. Wright seems to know well enough that the best tool at his disposal is Oldman’s performance so he takes as many opportunities as he can to focus squarely on that marvel as it unfolds. 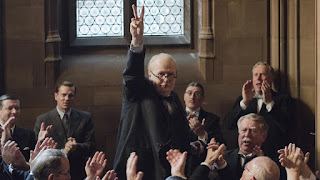 Of course, direction doesn’t have the necessarily be showy or extravagant to be notable, but it should have a consistent visual style and feel purposeful, and Wright’s doesn’t. It’s not so much any one moment that marks it as direction that’s lacking, it’s just a lack of any one moment that could signify it to be anything else. Each scene plays out with in a fairly standard manner, and as the movie moves along it started to lack a sense of urgency that would have made me feel more invested in the story. Neither the screenplay nor the direction alter the tone to make the stakes feel higher or the drama hit harder. Instead the movie just gradually moves along at the same pace, in the same tone and with the same style.

I can at least commend the cinematography and production design for being exquisite. Both of them create this atmospheric weight to ‘Darkest Hour’ that seems to be lacking in other aspects. As well as that of course, there’s the makeup team who have succeeded in transforming Oldman into Churchill and then some. It doesn’t look like a façade at all, it takes on a life of its own and never broke the illusion of who it was representing. In all honesty my first inclination would have been to assume that Oldman had actually gained the weight to portray Churchill for how realistic this looks.

But make up is only half of the transformation, the rest if Oldman’s stunning performance. It really is a phenomenon to see Oldman playing Churchill at his most powerful but also in his most vulnerable moments. There’s a great sense of energy to the way he moves and gestures that gives such mythic weight to his voice and inflexions. It is one thing to create an impression of a historical figure for a few scenes, but to truly embody them for a sustained amount of time takes raw talent that only the very best can muster. Any singular scene of Oldman is impressive but when you take into account the versatility he displays throughout the movie, it becomes astonishing. The rest of the cast fill their roles well and stand up to Oldman during scenes of interaction, but it’s the towering display of brilliance which lies at the heart of ‘Darkest Hour’ that sustains the movie and makes it worthwhile.

‘Darkest Hour’ lives and dies on Gary Oldman’s performance, which is a phenomenon in its own right, with the rest of the film falling a little short.