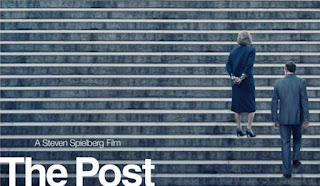 If there was ever a reason to see a movie based purely on the names attached to it then ‘The Post’ has to be that concept epitomized. That being said, it’s not as if the true story behind the film is fascinating to say the least, but when you have a movie starring Tom Hanks alongside Meryl Streep and being directed by none other than Steven Spielberg himself, then it’s fair to say that you are inclined to pay attention. Giants and legends of Hollywood bringing a story that feel frighteningly relevant in more ways than one.

Katharine Graham (Meryl Streep) is the first female publisher of a major American newspaper, The Washington Post. With help from editor Ben Bradlee (Tom Hanks), Graham races to catch up with The New York Times to expose a massive cover-up of government secrets that spans three decades and four U.S. presidents. Together, they must overcome their differences as they risk their careers and very freedom to help bring long-buried truths to light.

There have been a number of notable movies about the press uncovering major scandals over the years (by which I mean two others, over forty years) from Alan Pakula’s ‘All the President’s Men’which instils its story with great cinematic tension and palpable paranoia, to Tom McCarthy’s ‘Spotlight’ that sheds a more intimate light on the reporters behind the story and develops them throughout the movie with masterful nuance. Now there’s ‘The Post’ which kind of falls somewhere in the middle, and despite being not as good as either of those films it is still a solidly made and endearing political thriller.

Spielberg has a great talent for taking these giant stories and making them fantastically humane. In ‘The Post’ he does this through making it less about a story of uncovering political scandal, and more about a person finding their voice within an ever complicated world. There’s a reason why Spielberg continually frames Katherine Graham within meetings filled entirely with men. Why he draws attention to her quietness and reluctance to speak during those meetings. Though these sequences featuring Streep do become a little repetitive and spoil the pacing slightly, they are necessary to result in some brilliantly cathartic moments in the third act.

At the time of year where we see a lot of awards movies relying purely on their inspirational true stories to garner attention, it’s refreshing to see Spielberg subtly but masterfully instilling his movie with a sense of craftsmanship. There aren’t any overtly showy directorial methods here, just subtle and purposeful camera movements that add so much to the film as it unfolds. Spielberg is the kind of director who knows the importance of a simple conversation having rhyme and reason to it in terms of how it’s directed. He knows that when framed correctly a shot of a reporter running through a news room can be as thrilling as any high octane set piece. 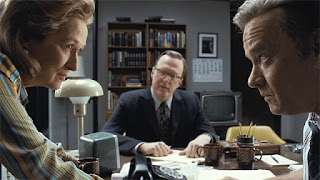 The script by Josh Singer and Liz Hannah does a superb job of subtly building urgency within itself. There is no singular moment in which the seriousness of the situation dawns on the characters, but rather it creeps up on them as if it were inevitable. Though at times it does feel a little melodramatic as it occasionally stops the plot purely for the characters to state their own development rather than have the two progress side by side, it still makes each of those moments intriguing enough by having built a film understanding of each character as they evolve. It also does a good job in being purely entertaining, seeing the character dynamics evolve and the touches of humour throughout are helpful devices in terms of making the movie feel more watchable.

It should come as no surprise that John Williams’ score for the film is terrific, with him and Spielberg having such an acute understanding of one another that I wouldn’t be surprised if they each crafted their works completely independently from one another and they just happened to synch up. It’s also no surprise that Hanks and Streep are brilliant in their roles as well. Hanks exudes charisma and purposefulness as Bradlee to a point where you can’t help but be instantly endeared to him as a character, while Streep embodies a timid figure in this story gradually coming to realise their own potential and significance.

If anything it’s more interesting to talk about the supporting cast as they are the actors who seem to be surprising in how capable they prove to be in this kind of role. Sarah Paulson and Bob Odenkirk both turn in excellent performances, as does Bruce Greenwood, Tracy Letts, Jesse Plemmons, Pat Healy and Alison Brie. Though each of them are only in the movie for a few scenes their performances all add to either the urgency or the emotional impact of the story and leave a good impression for the film as a whole.

Purposeful and engaging, ‘The Post’ is made within the comfort zone of its makers but when those makers are the likes of Spielberg, Streep and Hanks you couldn’t ask for more.