"I've killed everything that walks or crawls. You do it for long enough, you get used to it."

For whatever reason I find that the movies directed by Scott Cooper are always consistently good but end up falling ever so slightly short of being great for me. ‘Crazy Heart’ and ‘Black Mass’ both delivered great performances from their leading actors, and though ‘Out of the Furnace’ is my favourite of his that still lacked a certain something that would allow me to call it great. But for his latest film Cooper is reteaming with Christian Bale for a violent western epic, which certainly sounds intriguing.

In 1892, a soon to retire army Captain by the name of Joseph Blocker (Christian Bale) is assigned to escort a dying Cheyenne war chief and his family back to their sacred tribal land. Embarking on a preiilous cross country journey, they soon come across the sole survivor of a Comanche raid, Rosalie Quaid (Rosamund Pike). With hostiles on all sides, the party must fight to survive in an unforgiving and perilous landscape.

A premise like that of ‘Hostiles’ seems open for any number of themes that are interlinked with the western genre as a whole. There’s no doubt that Cooper’s film wants to address these themes, but the problem lies in how vast its scope is. I think in this case the reach of ‘Hostiles’  seems to exceed its grasp and it can’t help but become a little lost amid the giant western backdrop on which it takes place. There are any number of powerful moments throughout the movie but they all feel somewhat robbed of their power due to not being properly addressed or dissected.

But to start with the negatives would be a little unfair as on the whole ‘Hostiles’ is still a deeply impressive film. There’s no denying that Cooper has a firm grasp of the western genre but also knows when to play with the conventions of that genre and craft something that feels a little more unique. At times it’s relentlessly visceral but at others it plays to a smoother and more dreamlike quality. It actually felt reminiscent of some of Terrance Malick’s early work like ‘Badlands’ and ‘Days of Heaven’. There’s a rich texture to the movie that makes it feel strikingly unique.

Cinematographer Masanobu Takayanagi really lends a great depth of feel to the film’s imagery. As the characters transverse the western landscape there is a huge sense of scope to their journey, making them feel lost in the sweeping hills and valleys. His colour palette is also lush and warm which the violence that unfolds on it all the more striking. It lends itself to the film’s brilliant atmosphere, as does Max Richter’s excellent score. It all helps create a mood that seems both grandiose but also very ominous, with an ever present sense of danger. 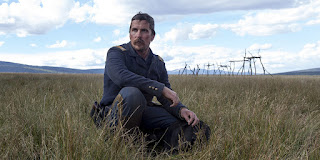 When that danger does reveal itself Cooper presents is excellently. The violence itself is quick and confusing but the aftermath seems all the more painful. In Cooper’s portrait of the west people don’t just die upon impact, we see the struggle and pain that comes before the end. The slow build of tension before the outburst is also terrific, creating a palpable air of suspense. The highlight has to be a fantastic night time raid, in which we never see the actual confrontation but hear the sounds of struggling from outside of the tent in which the ambush takes place. The sound design is so acute and implicative that it becomes much more effective than merely showing it.

Cooper also has a great hold on his actors, as he garners some terrific performances from them. While it’s no surprise that Bale gives a great performance, his role in ‘Hostiles’ ranks as one of his best. The conflicting emotions within him that dictate how he interacts with every character are in constant turmoil, and Bale makes that obvious without even speaking a word of dialogue. On a few occasions the camera will focus tightly on his face as he struggles to conceal his inner emotions and resume his stern command. There’s an inner rage to Bale’s character but also a profound tenderness and compassion that seem to be at odds with one another. Pike also does well at conveying emotion through the quiet moments of the script. It’s often the unspoken details that shine the brightest in her performance, with her pain and grief hitting much harder at those points.

As I said at the start though, there is simply too much going on within ‘Hostiles’ for me to call it great. Certain character moments can’t help but ring false as the film hasn’t adequately established the relationship between said characters, and some thematic arcs don’t feel developed enough to be fulfilling. That being said, for every missed arc there’s also one that lands with great power. The final few scenes in particular are both devastating for how they depict the west as an endless cycle of violence, but also hopeful for those who survive.

Epic in scope, which is both its strength and weakness, ‘Hostiles’ is an impressive effort from Scott Cooper that delivers some excellent performances from Bale and Pike.