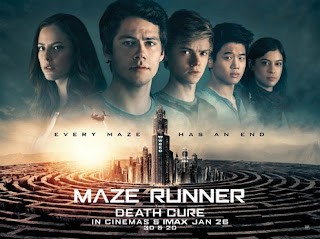 So it seems as if the trend for dystopian stories about teenagers being sorted into divisions and forced to compete in some kind pf physical trail that will determine the fate of their society is finally winding down. We’re now a full two years on from the end of ‘The Hunger Games’ and a full three years past the point where most people cared about it, and with the ‘Divergent’ series falling short of its two part finale we find the last instalment of ‘The Maze Runner’ slowly moving out as well.

Thomas (Dylan O’Brien) leads some escaped Gladers on their final and most dangerous mission yet. To save their friends, they must break into the legendary Last City, a WCKD-controlled labyrinth that may turn out to be the deadliest maze of all. Anyone who makes it out alive will get answers to the questions that the Gladers have been asking since they arrived in the maze.

I will give credit to ‘The Maze Runner’ series in that at least its director and cast stuck with it all the way. Wes Ball and his cast are clearly intent on giving the series the finale its fans deserve and in a way that doesn’t come across as cynical. Whereas ‘The Hunger Games’ prolonged its own demise by splitting the final instalment into two parts, ‘The Maze Runner’ has made three movies that, for all their shortcomings, feel mostly complete. They each stand on their own as competently made adventure films aimed at the teenage market. It doesn’t exactly break any conventions but at the same time….at least it’s not ‘Divergent’.

Mind you, it isn’t exactly surprising that everyone involved with these movies is willing to put the effort into finishing them with the news that lead actor Dylan O’Brien was badly injured during production, forcing the studio to push back the film’s release date and halt production while he recuperated. Bearing that in mind I can see the value that O’Brien brings to these films. He possesses a headstrongness that drives the movie forwards and even carries some emotional weight at times. When I say emotion I mean content that is elevated by O’Brien’s performance that would have otherwise been impactful if I felt invested in the characters, because in many ways that is one of this franchise’s biggest failings. 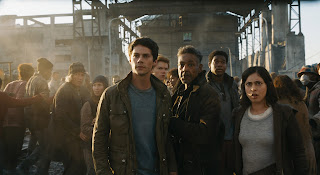 Granted, it’s not as if ‘The Death Cure’ had a lot to work on as the previous movies didn’t exactly dig deep into their characters either. But as the series rolls towards a climax several moments are treated with notion of closure that simply doesn’t exist. The characters never evolve to be anything more than vehicles for the audience, with a dynamic that never felt earned or gratifying. At various points throughout ‘The Death Cure’ and this entire series the characters have come to the aid or betrayed one another but I’ve never felt anything worthwhile come from any of it. Part of what made the endings of other YA properties like ‘Harry Potter’ so meaningful to so many was how invested within the characters we felt, making their progression over multiple films and final send off so endearing.

What makes the character issue worse is that the plot of the film isn’t nearly enough to distinguish it either. The only sense of involvement I got from the first ‘Maze Runner’ was the intrigue that came with wondering who these boys were and why they had been dropped into the middle of this maze. But now, with the motives and reason behind that all in the open we find ourselves faced with a generic oppressive government that our bland slates of protagonists are going to overthrow. The plot never has any suspense or involvement to accompany it because as audiences we’ve seen it several times before. The third act in particular descends into a series of tired revelations that are as repetitive as they are boring. There’s no suspense or urgency to the final confrontation despite having been supposedly built up to for three movies now.

As bland as the third act is though, it’s still more engaging than the first two which are littered with repetitive briefing sessions that are purely there to serve as exposition towards an already overly convoluted finale. The few bursts of action we do get are handled decently by Wes Ball, with a good amount of clarity and cohesion to each sequence. But sadly he doesn’t take that same approach to scenes of dialogue which are all shot on the flattest way imaginable. There’s no glaring flaw to them necessarily but there’s nothing that would engage or intrigue me, which is basically a description of ‘The Maze Runner’ series as a whole.

While far from an insulting effort, 'Maze Runner: The Death Cure' constantly feels like more of an obligation than any finale that could be a truly worthwhile experience.