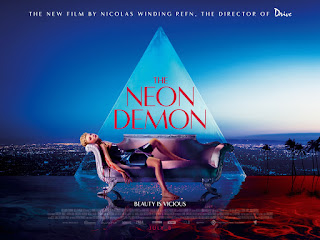 "Beauty is not everything, it is the only thing."

Nicolas Winding Refn has often referred to himself as a pornographer. Well that’s one hell of a pornographer because while ‘Only God Forgives’ was a severe disappointment ‘Bronson’, ‘The Pusher’ Trilogy and especially ‘Drive’ were absolutely fantastic, with ‘Drive’ being my favourite film of 2011. I will say that while I have enjoyed most of his films they are not for the faint hearted and if you’re on the ropes over whether or not to watch one of his films then let me just say that ‘The Neon Demon’ is most definitely not the place to start.


An aspiring model (Elle Fanning) travels to Los Angeles and finds an unprecedented amount of success. However, her youth a beauty place her in significant danger as it attracts jealousy and distrust from other aspiring models.


This is film is completely insane. Whatever you have heard or whatever you think, make no mistake, this film is pure and unrestrained insanity. Given that this director also brought you the head stomping from ‘Drive’ and basically all of ‘Bronson’ the fact that I’d call this his most sadistic and disturbing movie so far should give you an idea of just how deranged ‘The Neon Demon’ is.


It may seem odd to say that because structurally ‘The Neon Demon’ is a fairly straightforward film. The narrative itself seems to balance between reality and a dreamlike state as if the main character is torn between two different worlds. The whole film seems to be about the all-consuming power of beauty, which is sometimes conveyed subtly and at other times….not so much and the mian characters journey through the carnivorous world of fashion. It’s hard to judge Elle Fanning’s role in the film as her performance has to be analysed within the context of what the movie is trying to present. It is easy to look at this film and criticise the characters as being blank slates, but in many ways that is what the film itself is about, set in a world where everything is objectified and judged based on their exterior appearances.

So with that in mind the performances are good all round. Fanning’s innocent spark slowly fades as the movie progresses, and the almost haunting arrogance she seems to gain as more people fawn over so it creates this sense of development and only hammers in the message of the movie, perhaps too much at times. Photographer Dean comes close to being the most sympathetic character in the movie as Karl Glusman’s performance treads the line carefully between moral depravity and compassion for others, injecting doubt as to whether he really belongs in this world. Jena Malone is also mightily impressive. Keanu Reeves is also a nice addition though it’s sad his characters suffers from some wild inconsistencies that are slightly distracting and as for fellow models Bella Heathcote and Abbey Lee to full describe their performances would be to spoil to film so I’ll just say they are convincing.


But the actors themselves are almost overshadowed by the environments they inhabit, because the cinematography of this film is absolutely stunning. Wending Refn’s use of light and colour is extraordinary, making a film that is simply gorgeous to look at. Sometimes to the point of style over substance, but what separates someone like Wending Refn from another style over substance director like Zack Snyder is firstly the benefit of not every shot being ripped straight from a comic book but also the fact that the style is able to allude to the deeper themes of the film. Even if his vision sometimes strays from that substance on multiple occasions it seeks to elevate it and is successful for the most part. Sadly though it can’t quite make up for hollowness the film seems to project, but then again as I already said is this not a film about a world were beauty is valued over substance, so would it not make sense for the film itself to reflect that?


Those visuals often tell a deeper story of how people are objectified and obsessed with their own vanity, analysing it and dissecting it, but never really answering it. That be a problem for some, not everyone will be able to swallow certain aspects of this film, particularly within the third act, at times I found it going slightly over the top as well, but otherwise this is an amazingly crafted film. Sometimes almost too much, which brings me back to Wending Refn’s description of himself as a pornographer. He seems to fetishize various aspects of the film to the point where you could swear he was endorsing them (and we’re talking about some fucked up shit here). It’s insanity almost consumes whatever message the film was trying to convey, and the message itself was already hammered into your head so many times and is sometimes conveyed with a mind numbing lack of subtlety that it’s pretty hard to do that. Still, it’s one hell of a ride.


Disturbing, riveting and visually stunning as well as completely insane.