Talkin' Scorsese: The King of Comedy 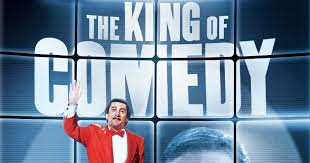 So after a film like ‘Raging Bull’ Scorsese was naturally eager to try a different tone of movie. When you have just made one of the greatest filmic achievements of modern times the only sensible thing to do in order to try and expand your career is broaden your own horizons as a filmmaker and go for a different genre. So he gave comedy a shot, and leave it to Scorsese for his version of a comedy to be a frighteningly relevant character study.


Despite its title as well as what I just said, ‘The King of Comedy’ is far from an actual comedy. There are certainly humorous undertones that naturally accompany the film’s subject matter, and from a certain perspective it is sometimes so darkly bizarre that all you can really do is laugh. But make no mistake, at the heart of this movie is yet another innovative character study about a damaged and deranged individual.


If anything it’s almost even more disturbing than Scorsese’s other character pieces like ‘Taxi Driver or ‘Mean Streets’ as this one has a distinct lack of pay off. As in there is no giant finale, no cathartic release or violent conclusion as well as no clear resolution. The film just sort of happens and that may sound like a poor summary of the film but there is nothing to really bookend the film, whether that is an attribute or a disadvantage is another matter entirely.


The reason is that while his other films built towards an inevitable conclusion, ‘The King of Comedy’ remains just as painful and wounded as it was when it started. There is no real indication that the Pupkin has broken his circle of obsession and jealousy, if anything it feels like it will only escalate from here. So does that make the film more disturbing or simply unfulfilling? It is difficult to tell, mainly because, as I said at the start, Scorsese clearly wanted to depart from his more violent character studies, going instead for a more comedic one. So with such a difference in tone it only makes sense to change the formula slightly, avoid an emotional payoff and simply leave both the viewer and the characters trapped in their tormented circle.

But enough about the ending, let’s focus on all that came before it because most of it is simply amazing. De Niro is back as the leading man and once again we get an insight into just how talented he is as an actor, watching this after ‘Raging Bull’ and ‘Taxi Driver’ makes it a marvel to behold. Jake La Motta, Travis Bickle and Rupert Pupkin are all variations of the same character to a certain degree. But through subtle mannerisms, changes in his speech and his general stance and posture De Niro transforms yet again. Here he can be just as deranged and obsessed as the previously mentioned roles, but instead the violence or self-loathing is replaced by a slight comedic edge and general pathetic nature. Pupkin can make you laugh just as often as he can make you squirm, from shooing away his mother when she interferes with his stand-up routine that he rehearses in her basement, to his unnatural obsession with fame and stardom.


Jerry Lewis is essentially playing a version of himself here, in fact some of the depicted events are based on real experiences Lewis had with his fans. So although he is pulling from life experiences and his own personality, Lewis’ performance is able to put aside any potential sense of security and focus on the character. In other words, despite essentially playing himself Lewis isn’t doing so with any concern for his own image, he is simply playing a great character.


In many ways Lewis’ performance summarises the entire tone of the movie. It cuts so close to the bone of our modern celebrity culture (and has grown even more relevant over time in my opinion) that you’re not sure whether to laugh or cry. The score and cinematography reflect this as well, while being bright and vibrant there is a sense of claustrophobia and emptiness of the characters’ lives.


Another unnerving detail is the fact that ‘The King of Comedy’ was released shortly after the shooting of Ronald Reagan that was carried out by John Hinkly Jr, a disturbed young man with an obsession over ‘Taxi Driver’ and in particular Jodie Foster’s role in the movie. An obsession over one Scorsese movie proved to be prophetic in illustrating the point of another Scorsese movie, people can go crazy over celebrities.


Its dark comedy is only matched by its unnerving pain.