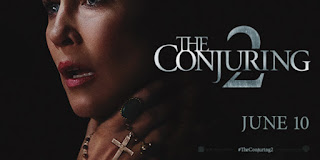 "After everything we've seen there isn't much that rattles either of us anymore. But this one, this one still haunts me."

Well at the risk of instantly dividing any readership I may have I must confess that I’m not a huge fan James Wan’s horror movies. ‘Saw’ felt like a good idea for a short story that was stretched extremely thin for 103 minutes, 'Dead Silence’ is ridiculously terrible as was ‘Death Sentence’. Both ‘Insidious’ and ‘Chapter 2’ were subpar horror films for me and while ‘The Conjuring’ was easily the best it felt more like a homage to superior horror films. Everything in it just felt like something I’d seen before in a better horror film. So with that in mind, how does the sequel hold up?


In 1977, in London, the Hodgson family begins to discover strange occurrences within their home. Ed Warren (Patrick Wilson) and his wife Lorraine (Vera Farmiga) travel to the Hodgson household to assist them with their poltergeist problem.


Like the first film from this franchise ‘The Conjuring 2’ still feels very much like a greatest hits compilation of every horror film James Wan watched back in the 1970s and 1980s, it’s easy to see what populates his cinematic nightmares from ‘Poltergeist’ to ‘The Amityville Horror’ (the originals, not the remakes, god what is the world coming to when both of those movies have been remade, what’s next ‘Videodrome’….oh no I’ve said too much).


This creates somewhat of a dilemma for me, you see I could very easily go through this film and pick apart where I’ve seen each horror sequence before, where each inspiration comes from and where it’s been executed better. There are numerous clichés, tiresome and overused tropes as well as a general predictability to the overall story. However there is no denying that ‘The Conjuring 2’ is an impeccably crafted film. Like its predecessor is picks through the archives of the past and brings forth the best elements of whatever classic horror film it wants. To say that Wan desecrates these sequences would be a severe miscalculation as his craftsmanship and skill behind the camera is excellent and he knows how to create a mounting sense of dread, an environment that feel claustrophobic, dark and a breeding ground for all manner of scares.

The only problem is that the story itself holds him back from ever actively delivering on that early promise. ‘The Conjuring 2’ is essentially one brilliant horror set piece after another linked together by a thinly veiled and often far too predictable plot. I’d be lying if I said the film never scared me, in fact I’d be lying if I said I wasn’t frequently unnerved and frightened by what was unfolding on the screen, but I left the film feeling like I wanted more, that Wan’s film hadn’t quite delivered on what I was expecting. It speaks to how strong the first half of the movie is, as someone like myself who had moderate expectations at best, suddenly had those expectations raised over the course of the movie’s first and second act.


It’s in the films third act where it just feels as if it’s stuck on repeat, going round in circles, replicating the same scares and although they still pack a punch due to Wan’s more inventive directorial style. If anything that is what frustrates me most, the fact that Wan is so clearly inundated with techniques concerning how to frighten people. He employs the use of sound and lighting brilliantly but even that isn’t enough to sustain a rather tiresome finale. Not only that but the characters don’t feel fleshed out enough to make me invested within the story itself, they’re well written to a certain extent but not quite empathetic or relatable enough for me. As the story drags out we all know where it’s going and Wan is reduced to an overreliance on jump scares. Though even here they are far better than any of the alternative approaches by other directors who claim to be working in a genre called horror but in reality is only frightening due to how terrible the film itself is.


It does raise a significant question of whether or not the film is better placed within the context of the current horror genre itself. While it’s not as broken as it was ten years ago it’s still a long road to recovery, and I must be honest, it’s films like ‘The Conjuring 2’ that are helping it to do that. Wan has introduced the idea to mass audiences and big studios that an expertly crafted horror movie with convincing performances all round and less CGI in favour of atmosphere building can pay off. So maybe this could lead to better things, so for that reason I hope it’s successful. If only they could sort that damn screenplay out.


Expertly crafted, if not slightly lacking in the story department.