The Silence of the Lambs: Fear Through Paralells 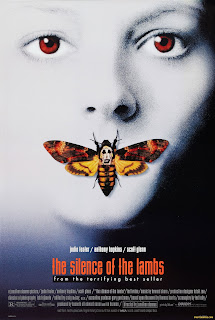 My high school drama teacher once told me that when she finished her A-Level exams in 1991 she and a group of friends went to see a film to celebrate. A lack of planning ahead meant that they just picked the most popular movie that was playing at the cinema they went to. That movie was of course Jonathon Demme’s “The Silence of the Lambs”. That’s what you need after weeks of nerve shredding exams, to sit down and watch one of the most enduring and lasting horror films in cinema history, although maybe it put things into perspective, I mean it’s hard to worry about exams when the people in this movie had to worry about being eaten by a psychopathic cannibal.


I bring this up because ‘The Silence of the Lambs’ is 25 years old this year and such an occasion should not go unnoticed. For starters the film belongs to a unique group that just two others belong to, it was one of only three films to win all five top Oscars (Best Picture, Best Director, Best Actor, Best Actress, Best Adapted Screenplay). The only other two to bag all five are ‘It Happened One Night’ and ‘One Flew Over the Cuckoo’s Nest’. It’s even more remarkable when you recall that to this day ‘The Silence of the Lambs’ is the only horror film to win Best Picture, by 1991 only two films of the genre had ever been nominated for the award, ‘The Exorcist’ and ‘Jaws’, so it’s hard to imagine anyone predicting that outcome.


Except is it really, because when you analyse each aspect of the film you really begin to realise how masterful it is? Like ‘Psycho’ and ‘Jaws’ people return to ‘Silence of the Lambs’ time and time again due to its lasting impact, it just feels timeless. Too many Best Picture winners are stuck in the year they came out yet Demme’s film has this ageless sensibility to it. It gets under your skin and inside your head, toying with your expectations, evoking fear from the calm before the storm, taking a line of symmetry and turning it in on itself. In short, it’s scary because it’s about us. While watching it you can’t help but notice the distinct parallels between Clarice Starling and Hannibal Lector. Their common goal of finding Buffalo Bill, their own psychological analysis of one another as well as the fact that they share childhood wounds. But of course one turned into an FBI agent and the other turned into a serial killer.

The heart of this film is their relationship, the thin line that separates them and their mechanisms of getting what they want. They are both held back by the system around them, Lector by the human race due to being a cannibal serial killer and Clarice by the law enforcement system due to being a woman. Not only that but they both respect the other’s intelligence enough to play these psychological games, in fact Lector is one of the few people in the movie to see Clarice as an equal, with most men in the law enforcement looking down on her. These factors and more are what make their conversations so enthralling. The strategy of it resembles an epic fight scene, or a tactical negotiation, they both strive to gain the upper hand and at more than one point have to back down and give a little to make progress. Clarice wants Lector’s help in catching Bill, but Lector is more interested in reaching deeper into Clarice’s psyche. What for, pathological satisfaction, a sense of superiority or aside from eating people and wearing their faces is this how he gets a kick out of life?


Even on a visual level these patterns are replicated. As soon as Clarice and Lector meet Demme’s camera establishes them as equals with two close-up shots, one of them may be behind glass but as far as the camera is concerned they are on level ground. Most of their conversations are filmed in that style to let us see every flinch, every detail of their faces in the best possible attempt to penetrate each character’s mind. What have they given away? You can tell who is winning each psychological battle depending on how they’re filmed. When Lector is looking straight into the camera it’s because our point of view (the camera) is now Clarice’s, without an objective view of Lector we can’t read his thoughts and thus he wins to conversation. The same goes for Lector, when he is genuinely interested in a subject or wants answers the camera takes an objective view of him and frames Clarice in close-up, looking straight as us. 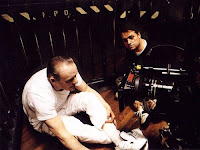 As a whole Demme’s direction is masterfully suited to this film. He was not one to shy away from the grit and gore, but also never neglected to examine the humane side of each situation. He builds up an empathetic relationship with the main characters and then establishes the stakes by not skimping out on the violence and not making light of it, death is a real and ever present element in this world. Like the best horror films ‘Silence of the Lambs’ evokes fear not through abnormality, but frightening realism, there is an artistic credibility to each action that only makes it all the more disturbing.


But where does that humane emotion come from? Most of the time it can be found in Jodie Foster’s performance. She carries a sense of strength and purpose but also vulnerability. We never doubt her abilities as an officer or an investigator but somehow we still feel deeply frightened as she enters that psychiatric ward for the first time. She conveys something that too many horror films forget today, the more we care about a protagonist the scarier the film is. We fear for their safety, we hope they make it through until the end. When it’s revealed through a case of superbly deceptive editing that the FBI are at the wrong house, and it is in fact Clarice who finds herself face to face with the serial killer, it makes your heart stop.

For a majority of the film we occupy Clarice’s mind set and that is no small feat for an actor. To sustain those same empathetic elements both when the audience looks at the world from your perspective and when they view you from the world’s perspective is difficult. That climactic scene in the dark feels scary due to a number of factors, one of them being that we are witnessing Clarice stumble around in the dark while Bill watches on through his night vision goggles. We can no longer feel safe within her own mind, everything we know about her and her abilities is out of focus and beyond reach, we can’t accurately read her thoughts and we can’t predict her actions.

But let’s not kid ourselves. Anthony Hopkins’ performance is the stuff of legend. It’s entering the zeitgeist of movie villains in a way that few people ever have. Hopkins was not to first actor to portray Lector on screen nor was he the last, but from the moment we laid eyes on him the identity of that character was forever burned into our subconscious. That first shot gives an eerie presence, he’s just so….calm. The way he stands upright, unflinching and unmoving, after we have had such a build up to his character and the horrific crimes he has committed, yet here he is, seemingly unaffected by it all. Then that chillingly pleasant “Good Morning” comes forward and seals the deal. Hopkins is and always will be Hannibal Lector.


Not only that but he is just so damn charming, it wasn’t for the small inconvenience of being eaten I would gladly have Lector as a dinner guest. A feat not matched by Ted Levine as Buffalo Bill who creates one of the most loathsome characters in modern cinema. The self-loathing, mutilation of others and sickening scheme are enough to make your skin crawl. He remains an enigma for so much of the film and yet his name dominates the conversation so much that we almost feel as if we know him before we even see him. But then we see him and he still shocks us. As Clarice descends into his basement one could believe she is descending into hell itself. Not least because of the sound mixing consisting of Clarice’s frightened panting, Bill’s own heavy, predatory breathing, the screams of a captive girl, frantic barking of a dog and they are all underpinned by Howard Shore’s mournful score.


It is important that we register Buffalo Bill as a genuine threat because what else could bring these two characters together. Their unites symmetry underpins our fear of Bill as well as our deeper fear of the fragility of morality. If Clarice, a woman devoting her life to protecting others, can connect with Lector so easily what does that say about her? What does it say about us?
Posted by Joshua Price at 14:12