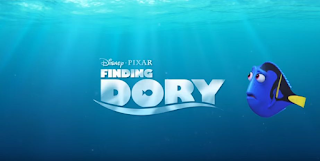 "I suffer from short term memory loss. It runs in my family, I think."

Of the next four Pixar films scheduled for release, three of them are sequels. We’ve got another ‘Incredibles’ movie, another ‘Toy Story’ (why?) and perhaps most horrifyingly, another ‘Cars’ movie (the first two weren’t even good, why would you make another?). Outside of the ‘Toy Story’ sequels Pixar have not had resounding success with their sequels so there is an underlying pressure on ‘Finding Dory’ to establish that Pixar can actually produce a half decent sequel that isn’t a ‘Toy Story’ film.


A fish named Dory (Ellen DeGeneres) who suffers from short term memory loss sets out to find her family based on her fragmented memories of her past as she tries to piece them together. She is also accompanied by her friends Marlin (Albert Brooks) and his son Nemo.


So I hope I’m not alone in saying that ‘Finding Nemo’ was hardly the Pixar film I was demanding a sequel to. It just feels so perfectly self-contained that messing with it or even attempting to expand upon the story seems like it might spoil it a bit. Thankfully ‘Finding Dory’ most definitely does not ruin the previous instalment and on its own it is a pretty decent successor as well. Like the original the animation is simply stunning. There is a glorious fluidity to everything from the smallest of expressions to the largest backgrounds, all beautifully textured and with such a variety of backgrounds and settings that is no small feat.


It’s all the more remarkable considering just how fast paced everything in this film is, from the plot to the animation itself everything moves at a terrific speed but not as a means to distract its audience from plot hols or inconsistencies. It is able to maintain this fast pace yet also retain a good amount of emotional hooks that drive the story forward and also create compelling characters. That is actually a big surprise because I did not expect to be nearly as emotionally attached to Dory as the film made me, I was expecting to always think of her as the derogatory humorous side kick but on the contrary there is a real source of investment to be found within her character and her story.

It also helps that Ellen DeGeneres is fantastic in this role. I feel like there are few voice artists who could make this character as lovable as she is as opposed to annoying, because make no mistake there is an underlying potential for this whole scenario to become annoying and pandering. But it manages to stay just above that and instead becomes a much more enjoyably entertaining movie than one might imagine, both for adults and children. There is plenty of humour to appeal to both demographics and they never feel mismatched or inappropriate, it is simply a well-placed joke that anyone can laugh at.


There are a few problems however. One of the main ones is how heavily this film relies on the original, hoping that you already know established characters and their relationships as well as their experiences to excuse any initial lack of depth. Now to be fair it’s safe to say that most of the audience for this movie had already seen the original (although it is kind of worrying to remember that most of the target audience probably weren’t even born when the first one came out twelve years ago). Not only that but (and I know this may seem irrelevant for a film about talking fish) but some aspects of the plot seem hard to swallow. In other Pixar movies any potentially unbelievable moments were handles with just the right tone in order to make them funny as well as easier to buy. But here real stakes both in terms of emotion and narrative hinge on a few factors that are somewhat beyond belief, even for a film about talking fish. As well as that, while the film is emotionally stirring it feels as if it has far less of an impact that it wants to.


The plot also feels closely reminiscent of the original as well. Not in a way that necessarily expands on the first film but merely continues it, repeating the same beats to arrive at a very similar conclusion. It repeats the same themes and motives and a lot of the old characters crop up to remind you of that, and they are mostly filling the same roles as well. In fact characters like Marlin and Nemo seem unfairly side-lined here they become less of an accessory than Dory herself was in the first film. The cast of new characters are all enjoyable and creative, with the standout being an octopus named Hank (Ed O’ Neil).


‘Finding Dory’ mixes humour and heart in the usual Pixar way, even if it does rely too heavily on the appeal of the original.