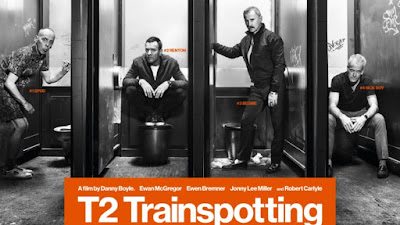 There is always an instinctive worry with making a sequel to a great movie. Even if it is released immediately afterwards there is a weight of expectation on its shoulders that it has to support, as well as stand on its own as a worthy successor. But when a film like ‘Trainspotting’ which has had over twenty years to build up a legacy and reputation as a generation defining film, then the pressure is most definitely on.


Twenty years have gone by since Mark Renton (Ewan McGregor) last saw his friends Spud (Ewen Bremmer), and Sick Boy (Johnny Lee Miller) but when he returns to his home town of Edinburgh following a near death experience to try to make amends and put his past actions to rest. But he must also avoid the psychopathic and newly freed Begbie (Robert Carlyle), who is out for revenge.


I will immediately say that anyone who goes into ‘T2 Trainspotting’ looking for a repeat of the first film will be disappointed. This sequel never truly re-captures the magic of the first film, but therein lies its genius. As well as catching up on where these characters are and what they are doing, ‘T2 Trainspotting’ acknowledges that they are all searching for what they had in the past, but willingly acknowledges that deep down it can never be reached again.


It uses the 20 years that have passed since the first film as the main thematic driving point of the sequel. When Renton returns to his home he hopes that he can apologise to his friends and pick up where they left off, and though his friends are angry at him for what they did they welcome him with the same ambition. Throughout the film they look back on not only their own memories, but the past in general. The culture that spawned them and ‘Trainspotting’ itself from their favourite footballers of yesteryear to the infamous “Choose Life” campaign.


For this reason it may be a good idea to familiarise yourself with the original before going into ‘T2 Trainspotting’. Not just for the subtle visual nods that recall the first film, but also for its environment and location. As soon as Renton arrives in Scotland once more Boyle makes it obvious that the entire landscape around him has changed under his feet. Each of the characters reach, or have already come to, this conclusion over the course of the film, that they are merely relics of a time gone by and trying to recapture their lives twenty years ago simply is not possible now. In perhaps the most strikingly poignant line of the entire film Sick Boy tells Renton that he is “a tourist in your own youth”. Whatever enterprise or scheme the group undertakes here is just an excuse to try and re-live the glory days rather than moving forward with their lives and getting out of the rut they are all currently in.

That leads me onto the fact that not everyone may be pleased with where the characters have ended up, not just at the start of the film but also by its end. But it still feels true to those characters and to the kind of film both this and ‘Trainspotting’ were. Also, just like the original, the cast are all fantastic, perfectly sinking back into their roles not in an imitation but in a fully realised portrait of what each character would be doing twenty years on from when we last saw them. McGregor, Bremmer, Miller and Carlyle retain that excellent dynamic they had a group but also shine individually. Though I was initially disappointed that Kelly McDonald felt underused as Diane only re-appears for one extended scene, within the context of the film it makes perfect sense. Diane has moved on with her life, and is therefore no longer a part of the world that Renton seeks to recapture.


Like his cast, Danny Boyle has returned with just as much bravado as his original handling of Irvine Welsh’s writing. His camera still possesses the same manic energy and pulsating rhythm that ran through the first film. His stylistic choices are not only inventive as they were in the first one, but they even utilise modern technology to enhance them when necessary, creating some strikingly stylish visual set pieces that the original would never have been able to create.


I suppose the only area where the sequel really falls down is that it struggles to make itself feel necessary. True it is a joy to catch up with each character and see what has become of their lives, but at the same time ‘T2 Trainspotting’ doesn’t quite evoke a sense that I needed to see it. I suppose that is the inherent problem when following up such a singularly strong film as ‘Trainspotting’ but even when taking that into account the sequel feels like an accessory to the original rather than an essential addition. But as I said before, it takes that theme and uses it as a major crux of the film, questioning why we obsess over the past when we should be moving further forward.


Energetic and pulsating like the original, with a cast that are just as superb upon revisiting them. But at the heart of ‘T2 Trainspotting’ lies an emotionally resonant, sometimes painfully so, script.