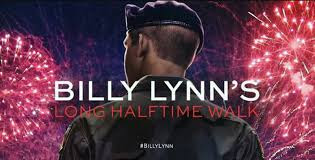 "It feels weird, being honoured for the worst day of your life."

Ang Lee has always been one to push unconventional filming methods. From his decision to, as a Taiwanese born director, helm an adaptation of Jane Austin’s ‘Sense and Sensibility’ to making what was widely regarded as an un-filmable novel when he undertook ‘Life of Pi’. Even his career in general has defied convention and expectation so many times by directing a huge variety of genres in the form of martial arts masterpieces and cowboy romances. But this experimental approach does not always work.


Billy Lynn (Joe Alwyn) is a 19-year-old Army specialist fighting in Iraq. After he and his comrades barely survive a tense battle that receives broad news coverage, they are celebrated as heroes and brought back home by the Department of Defense. In the United States, they go on a promotional tour across the country that ends at the halftime show in Dallas for a Thanksgiving home game. There, Lynn recounts the tragic memories of the war in the form of flashbacks.


The biggest talking point about ‘Billy Lyn’s Long Halftime Walk’ is that it was filmed in 3D with a frame rate of 120 frames per second (five times the normal speed) at 4K. No doubt the intended effect was to create a film of higher visual clarity than most, further pushing the limits of film and once again singling Lee out as a director of innovative and boundary pushing talents. But the intended effect and the ultimate effect can often be two very different things, and as much as I respect Lee for trying to push filmic technology forward, it really doesn’t work here.


Whether it is Lee’s own inexperience (which would be the same for any director with this new technology) at using the technique and therefore he cannot frame or compose his shots in the right way to bring out the effect or it could be the cameras not being adequate to support the technology. Maybe the cinematography took the wrong approach to handling it or maybe the technology is not yet up to scratch to make the most of it. Whatever the reason, the film is ultimately nauseating in the way each scene is composed and the way in which the camera moves. While the effect works in small dozes and for individual scenes, particularly the scenes set at the Halftime show in which the confusion and orientation feels like a deliberate attempt to place us in Billy’s state of mind, but even in quitter scenes the slightest camera movement can make the scene unfocussed and messy. Not only does it look poorly composited but it also makes the scene look badly staged and Lee is too good of a director for me to believe that he can’t compose at least one evocative shot in a 112 minute film.

What makes it even more off putting is how frantic the whole film is. Though I won’t blame Lee’s direction for the ambitious failings of this new technology, I have to point to him for not realising early on that this kind of frame rate does not complement fast movement. One of the most notable high frame rate movies of all time was Kubrick’s ‘2001: A Space Odyssey’ but as opposed to the poetic stillness of that film, ‘Billy Lyn’s Long Halftime Walk’ fills the screen with glaring visuals, frantic assembly and non-stop movement that me feel as if the room was spinning.


I can give the film credit for attempting to explore an issue most moviegoers are not ready to discuss. The idea that by idolising soldiers and promoting them as superstars are we unconsciously promoting the idea of war as a good thing? Obviously the film wants to raise that question and does a fine job of addressing it without patronising or insulting either party. However the way it chooses to illustrate those issues are a bit too obvious to be effective. It felt less like a message I was meant to uncover and more like one that was being yelled at me. Worse still is how none of the characters have an ounce of depth to them, with many being contrived and clichéd to an unrealistic point. There is a lot of conflict to be had with this debate but how can a film raise it when it fills itself with such unrealistic portrayals that continually feel like an obligation to steer us in the right direction rather than real human beings who could raise a new issue on the topic.


The screenplay neglects its characters so much that I can’t even say anything about the actors involved. Chris Tucker, Steve Martin and Kristen Stewart are all fine in their roles, I think. It’s honestly difficult to tell because the characters themselves are so woefully underdeveloped. They are all caricatures of people while the actors play the caricatures well, I’m left wanting so much more. Vin Diesel seems horribly miscast as Billy’s mentor while he was out in the field, failing to stretch beyond his usual mumbling, supportive, tough guy persona that genuinely drifts into self-parody at times. I feel bad for Joe Alwyn in his acting debut, because while he is also just fine, there’s so little for him to do beyond standing around and listening to others talk about him.


With a visual style that distracts from the story rather than enforce it and a story that didn’t have much substance to begin with, ‘Billy Lyn’s Long Halftime Walk’ is a disappointing entry for Ang Lee.