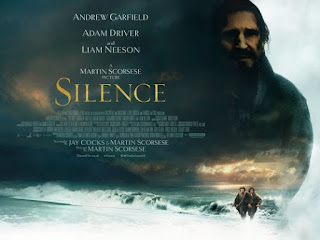 "I pray but I'm lost. Am I just praying to silence?"

When Martin Scorsese releases a new film it is something I’m going to pay attention to regardless. But given that ‘Silence’ marks the realisation of a long awaited passion project that the director has been trying to bring to the screen for 25 years, a project that he halted for both professional and personal reasons involving his work schedule and also his belief in his own maturity as a filmmaker, this could easily be called a hallmark in Scorsese’s career before even deciding upon the quality of the film.


In the seventeenth century, two Portuguese Jesuit priests Sebastião Rodrigues (Andrew Garfield) and Francisco Garrpe (Adam Driver) face violence and persecution when they travel to Japan to locate their mentor (Liam Neeson), who has reportedly committed apostasy, the act of publically denouncing his faith.


The premise of ‘Silence’ seems fairly simple but that is often the way with Scorsese’s films. You find that a description of the plot can double as a description of the main characters or the experience the viewer undertakes when watching the film. From ‘Mean Streets’ to ‘The Wolf of Wall Street’ and nearly everything in between, Scorsese’s greatest works are evocative on a level that few auteurs are. ‘Silence’ stands alongside his best work as a masterful piece of filmmaking, as epic in scale as it is intimate in focus.


The thematic conceit of ‘Silence’ is how far people are willing to go in the name of their faith, how much suffering must they endure for it and how do they cope upon reaching breaking point? This ideology of faith and guilt make the story fit into Scorsese’s oeuvre on a thematic level, but the way in which he goes about bringing those themes to life mark it out as a unique but similarly stunning entry. The director is much less reliant on his usual hyper stylised method, making it a far departure from his 2013 masterwork. It is yet another reminder of how he is consistently able to employ new directorial techniques to his work and execute them with such profound brilliance. ‘Silence’ may be quieter (naturally) and contemplative than we are used to, but it ultimately complements the torturous ordeal that characters undertake during this story.

The way ‘Silence’ goes about examining that conceit is astonishing. Scorsese drops his usual format of subjective filmmaking for a more restrained approach here, treating the audience as an impartial observer. Though that sounds like it would lead to a sense of separation between the viewer and the story, the final effect is the exact opposite. This more realistic approach only serves to draw the audience even further into this world, to make them feel more horrified at the atrocities as they feel painfully real when displayed on screen here. Where many filmmakers have turned the suffering of Christians as a pornographic spectacle, revelling in their suffering and painstakingly drawing out every injury sustained but Scorsese’s approach carries the burden of their suffering without overtly choosing a side in this conflict. Not only that, but as an onlooker you feel an overwhelming desire to intervene, however like the main characters you are powerless to put an end to the constant suffering and must watch in silence.


One of the most striking aspects of the film is just how quiet it is and how masterfully its silence is used. The lack of sound can be just as effective a tool for drawing emotions as the inclusion of it, and Scorsese seems to understand this better than most. The lack of a soundtrack means that when the air is punctuated by screams of anguish and pain they are all the more terrifying. This over whelming silence also allows Scorsese to evoke the central emotions of his characters without ever directly condoning or condemning them. As he has done with several of his great characters, from Travis Bickle to Henry Hill, Scorsese never endorses the actions of his characters, he simply asks the audience to view the world from their perspective. But as I stated earlier, Scorsese miraculously achieves this point of view feel while also maintaining that purposeful distance. The effect is almost hypnotic and as a result the film never drags despite its epic runtime.


Of course, this would all fall flat if the film did not have great acting talent to bring these fascinating characters to life. Andrew Garfield continues to mark himself out as an immensely capable actor, as Father Rodrigues he carries this deep torment with him, a pain that his prayers continue to be answered with silence amid all the suffering he witnesses. We watch as his devout faith is slowly stripped away and is emotionally broken down as the film progresses. Garfield’s performance never makes any illogical leaps as to where the character is on his emotional journey, we witness him slowly but surely descending with every step. But Garfield’s performance is matched in plenitude by how brilliant Adam Driver is by his side, becoming an equally commanding and empathetic role in the movie.


However, as superb as Driver and Garfield are, it could be Liam Neeson who truly steals the show. Where the two younger actors are throwing all they have into their performances, it’s the veteran actor of Neeson who just seems to make it look effortless. His first scene alone is an astonishing display, bringing this immensely complex and tortured role to life with such bravado that it almost makes you forget the fact that he is much more of a supporting character. Then there are the excellent performances by the Japanese cast, with particular standouts being Tadanobu Asano and Shinya Tsukamoto, men who each have a different reaction to the arrival of the priests but manage to make the viewer feel the weight and value of their presence in equal parts.

Upon re-teaming with cinematographer Rodrigo Prieto who shot ‘The Wolf of Wall Street’, Scorsese creates a film that is just as visually interesting but for radically different reasons. Like the rest of the film it looks still and meditative, particularly with its sweeping shots of nature and tiny undisturbed villages. It is visually striking but in a more poetic way, creating profound moments with nothing more than masterful framing and composition. The same can be said for the editing, which succeeds in being evocative with the simplest of cuts but never fails to draw the viewer deeper into the environment within which the story is taking place.


The fact that this material is in such capable hands is immensely gratifying. While any lesser filmmaker could have severely undercut the weight of this story, Scorsese and his cast are not interested in choosing sides. They are interested only in bringing this complex story to life, examining it from the perspective of the beholder but never seeking to exploit or demonise any particular group. It is such an intricately crafted film that by the time it was over I felt as if I had undergone an exhaustive experience. Each piece of the film feels so exquisitely designed to engross the viewer and not let them go until the credits start rolling. Even then I found the film had a lasting impact and I have taken several different readings of it since seeing it. It is brutal and bleak, almost forcing the audience to relate to its characters by putting them both through hell and back with no chance of enlightenment. It reminds us that history is best used when we learn from it.


‘Silence’ is a monumental piece of filmmaking, emotionally exhausting and often tough to watch. It is so utterly profound, complex and masterful that it must be seen to be believed.