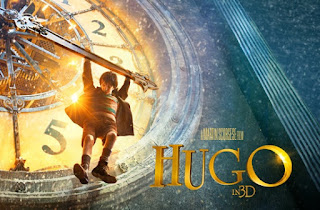 "It's Neverland and Oz and Treasure Island all wrapped into one."

I think if there is one thing we have learned over the course of this series it is that Martin Scorsese, far from being associated purely with one genre, has never been afraid to experiment with different genres and styles. Despite homing the gangster film to a level of perfection we have not witnessed since, he has been eager to delve into the genres of comedy, epics, historical dramas, thrillers and in the case of 2011’s ‘Hugo’, family films as well.


Twelve-year-old Hugo (Asa Butterfield) lives in the walls of a busy Paris train station, where his survival depends on secrets and anonymity. But when his world suddenly interlocks with an eccentric girl (Chloe Grace Moretz) and the owner of a small toy booth in the train station, Hugo's undercover life, and his most precious secret, are put in jeopardy.


Contrary to what I said at the start, despite proving to be a versatile and thematically consistent director, ‘Hugo’ is different to any film Martin Scorsese has made before. Not just a family film but a big budget 3-D extravaganza. What is more remarkable than his undertaking of this project, is just how masterfully he succeeds. The veteran filmmaker adopts and integrates modern technology and sensibilities pitch perfectly, evoking such a tactile feel to his environment but also bringing forth a sense of wonderment that he has rarely displayed in his films until this point. Scorsese’s films are usually about focussing on the thematic weight of its characters and though ‘Hugo’ contains that to a degree Scorsese is also able to create this magical atmosphere that proves even at this stage of his career he is far from being repetitive.


Most 3-D films fall down on two fronts. In the cinema the effect can be distracting, poorly used and not add anything to the film as a whole thereby making the effect pointless. But the other negative effect is that once you leave the cinema and watch the film at home, all those glaring moments where the effect was supposed to be inserted are made abundantly apparent and are now an even bigger distraction from the film. ‘Hugo’ manages to avoid both in possibly the best way I have seen from a live action film. As a 3-D experience you can forget ‘Avatar’ or ‘Gravity’, ‘Hugo’ remains the best use of the technology I have seen so far. But once outside of the cinema, the lack of 3-D is barely noticeable upon re-watch. True, the effect does add to the films atmosphere when it is there, but never subtracts when it is absent.

As well as being an excellently crafted adventure, with environments beautifully created by a fantastic blend of CGI and real locations, ‘Hugo’ is Scorsese’s love letter to early cinema. Not only does he devote the second half of the plot to pioneering filmmakers, but he even utilises a few of their techniques when telling his own story. It celebrates the origins of cinema and evokes a sense of passion towards them that must be very close to the director’s heart. There is a loving care taken with each shot that speaks volumes over how much the director cares for this subject. They are adoringly crafted and stunningly detailed that you can tell this was recreated by someone who wanted to get it right, and he did.


But it is not just style over substance or rose tinted spectacles. The script by John Logan does an excellent job of blending several recurring elements together and it takes a number of twists and turns that are sure to surprise the viewer on their first viewing. Though it occasionally wonders a bit too far and risks becoming unfocussed, the script luckily steers back onto the right tracks, giving enough time in craft wonderful characters who underpin the sprawling adventure. Despite being two very young actors Asa Butterfield and Chloe Grace Moretz are fantastic in the two lead roles. Ben Kingsley brings forth a sense of wisdom and experience that one would expect from the Oscar winner. But the biggest and most pleasant surprise may be Sacha Baron Cohen. At the time casting him in this role must have seemed wildly off the mark, but Cohen brings forth a new level of talent, one that has all the comedic eccentricities of his finest comic creations but also a more restrained approach that ties into the films more elegant sensibilities.


Scorsese has made many documentaries about filmmakers and has spoken of their influence on his career. But with ‘Hugo’ he is allowed to dramatize their efforts in the most ambitious tribute of recent cinematic history. This is a poem in their name, a beautifully realised piece of art that stands on its own as a terrific film, but also something that ensures the great names of the past will live on. That seems like a pretty good lesson for kids, right?


Celebrating the past using the most modern filming techniques, all integrated perfectly by a master filmmaker still clearly at the height of his talents.