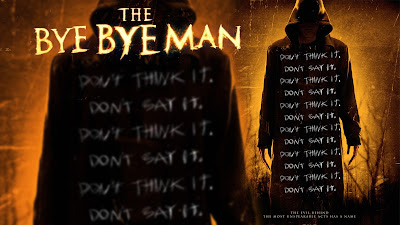 We saw some truly fantastic horror movies in 2016, from the visceral, heart pounding thrills of ‘Green Room’ to the quiet and haunting atmosphere of ‘The Witch’. I was hoping that the acclaim both movies received would inspire the big studio horror movies to put a little more effort into their picture, strive to do better and achieve a greater sense of artistic merit. But why on earth would they do that when dumpster fires like ‘The Bye Bye Man’ are already made?


When three college friends stumble upon the horrific origins of the Bye Bye Man, they discover that there is only one way to avoid his curse: don't think it, don't say it. But as events continue to spiral out of control and the dreaded curse grows ever nearer they find it all the more difficult to avoid falling into certain doom.


‘The Bye Bye Man’ is a terrible film. I need to say that straight away because there is no hiding it, no skirting around it and no dressing up of the final verdict. This is an awful, horribly made, poorly acted, uneventful piece of garbage. It is assembled of components that are shamelessly ripped from other horror films and is ultimately too idiotic to come anywhere near effective horror, but too banal and boring to be unintentionally hilarious. You know you are in trouble when even the most basic premise of your film fails to make sense, but at the very least you could attempt to give some explanation or amount of detail concerning said premise.


The backstory makes about as much sense as anything else in the movie, and even then the titular Bye Bye Man never felt like an opposing threat. It’s just like any other faceless entity that has to hunt down a group of idiotic teenagers. There is nothing unique, innovative or even mildly interesting about it. The best horror movies establish the stakes and narrative thrust as quickly as they can, but ‘The Bye Bye Man’ never comes remotely close to establishing either of these aspects. The most basic of storytelling elements are abandoned right out of the gate in favour of paper thin characters, clichéd plot devices and so many terrible, predictable, infuriating jump scares.


The fact that the plot lacks any sense of cohesion is made even worse by the movie being clearly chopped down to a PG-13 rating. The editing is so raw and choppy that even the most basic of scenes become difficult to map out and when something does actually happen I was genuinely concerned that the director had just dropped a camera down a flight of stairs to mimic a sense of panic.

It is unbelievably inept, and baffling to think that multiple people looked at this movie and thought “we can release this, this is good enough for public consumption”. It’s writing manages to be overly expositional to a woeful degree, but also so mind numbingly empty of details of logic that I found myself questioning what was happening literally seconds from the films end. The dialogue is virtually non-existent as it might as well be stage directions to the audience in terms of how they could salvage some sense of meaning from this train wreck.


But even the most basic components of filmmaking, such as lighting, camera angles, staging and location all seem so horribly off. There seems to be no limit to its incompetence as it seeps into every solitary aspect of the film and all of this is simply on a technical level. When you take into account how pitifully uneventful the film is, with each boring section only punctuated by the occasional outburst of bloodless violence it becomes even worse.


It must be difficult for any actor in a film this awful, to be given such clichéd, uninteresting and unmotivated characters and be expected to somehow bring them to life. But even then there is no accounting for how unbelievably terrible the actors in ‘The Bye Bye Man’ are. It’s not even that they are hilariously bad, but they are so bland and forgettable that I could not recall a single instance during the entire film that they genuinely convinced me of the emotions or events that I was being told were taking place on screen. In the middle of this confusing mess appears the legendary Faye Dunaway, but even she seems incapable of acting properly. Having starred in some of the greatest films of all time like ‘Bonnie and Clyde’, ‘Chinatown’ and ‘Network’ even she can’t escape the all-consuming incompetence of ‘The Bye Bye Man’.


By far the scariest thing about ‘The Bye Bye Man’ is the idea that 2017 might herald a movie that could be worse than this.