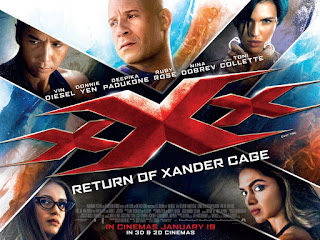 "It feels good to be back."

So, anyone else excited for a threequel that comes more than a decade after it was originally supposed to be produced, featuring the leading man who starred in the first and declined to return for the second film leading to the sequel flopping at the box office and proving detrimental to the plans of the third film only to now have said leading man return for the third film? This is the world we now live in.


After coming out of self-imposed exile, daredevil operative Xander Cage (Vin Diesel) must race against time to recover a sinister weapon known as Pandora's Box, a device that controls every military satellite in the world (don’t you just hate it when governments do that?). Recruiting a new group of thrill-seeking cohorts, Xander finds himself entangled in a deadly conspiracy that points to collusion at the highest levels of government.


There is a certain art to making big, dumb action movies. It’s about never pretending that your movie is smarter, more serious or more dramatic than it really is. Sadly, ‘xXx: Return of Xander Cage’ has all of the components of a dumb action film from its clichéd plot, overly extravagant action set pieces, ludicrously thin characters and requiring the audience to have quite a large suspension of disbelief. You may have seen an action film receive praise from critics because “it knows what it is”. When critics say that what they mean is that the tone remains balanced and consistent throughout the movie. Does the plot of ‘Face/Off’ make one lick of sense? No. But this is a world in which doves spontaneously fly across the screen during every action scene and someone put John Travolta in a position of authority, clearly nothing in the movie’s world has any sense to it.


That is where Xander Cage and his crew of thrill seeking cohorts wipe out. The movie tries so desperately for the audience to become invested in the story or characters when it is so blatantly clear that will never happen. This is not to say an action movie can’t reach achieve this but here, where people jump from skyscrapers and land unscathed, where the plot is so generic and repetitive that it feels like it was written on the back of a napkin and where the characters are so paper thin that I simply identified them as “the ones that aren’t Vin Diesel or Donnie Yen”, it doesn’t work.

It should come as little surprise that Yen is by far and away the best part of the film. If this movie serves no other purpose than to give Donnie Yen another platform from which to be embraced by mainstream audiences (though after ‘Rogue One’ I doubt he will need another) then I can at least find one way to justify its existence. His stunt work elevates any action scene he is a part of and his charisma makes his character much more likable compared to the rest of the cast. They are all equally shallow and predictable as far as characters go, but at least Yen puts on a good show whereas the rest of the cast, well let’s be kind and just say that they don’t.


That being said though, was anyone expecting otherwise? If you are a fan of this first two films it is not as if you are going to be attentive to the richness of the plot or the complexity of the characters. Which is just as well because Xander Cage isn’t exactly the most likable or involving of characters. Vin Diesel is a lot of things but he is not nuanced or a vehicle for exposition, so why the filmmakers decided to make Xander Cage both of these things is beyond me. He also isn’t the bets at delivering one liners, of which there are plenty of and the results are fairly disastrous.  What makes it even worse is how the movie constantly tried to convince me how brilliant he was by having people praise him non-stop, have women throw themselves at him and adversaries shaking in fear because Xander Cage has returned. It is a textbook example of show don’t tell.


The action itself is decently directed, mainly because most of them are staged in an interesting environment. D. J. Caruso is competent enough behind the camera and manages to make the action a pleasant bit of escapism rather than in incomprehensible mess of shaky cam and quick edits. But the plot that takes us from one action scene to the next is such a thinly veiled and contrived form of transport, and the film itself demands that we take it so seriously, that it almost becomes impossible to even remotely care.