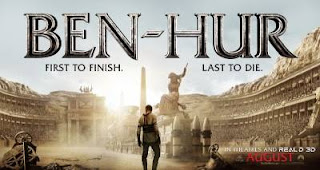 "My family was once among the most respected in Jerusalem, until we were betrayed. By my own brother."

Have we really come to this point? Are we so starved of ideas that we are forced to recycle not just one of the greatest films ever made, but one that seemingly leaves so little room for improvement or different interpretations that we end up with a new version of ‘Ben-Hur’, something that no one asked for or even wanted? Are we that desperate for name recognition or established properties that we have to do this? Isn’t ‘Stranger Things’ doing really well without an established property behind it, why can’t movies just follow that?


A nobleman, Judah Ben-Hur (Jack Huston), is falsely accused of treason by his childhood friend and adoptive brother Messala (Toby Kebbell). He survives years of slavery under the Romans and attempts to get revenge by challenging Messala to a grand chariot race while being forever changed after a series of encounters with Jesus.


In fairness there are any number of excuses one could use to support this remake of ‘Ben-Hur’. After all, the 1958 version is in itself a remake of a 1925 silent film, which is itself also a remake of a 1907 short film, which is based off 1880 novel, ‘Ben-Hur: A Tale of Christ’. Not only that but of course this is hardly the first time Hollywood has opted to make a quick buck through name recognition so why should we dish out all the hate to the latest in a long line of remakes. Well that may be the case, but as far as I’m concerned there’s something much more cynical and devious about this particular remake that I will explain later, for now though, what of the actual movie?


The first question you need to ask when reviewing a remake is as follows, does the remake improve on the original in any way, shape or form? The answer with ‘Ben-Hur’ is a resounding no. Warning bells should immediately be sounding when you noticed that this version clocks in with a run time of 123 minutes compared to the original’s run time of 212 minutes. The result is the story as a whole feels rushed and poorly structured, lacking several key aspects that made the original the defining masterpiece that it was.


The result of such a drastically shortened running time is that the fully fleshed out atmosphere possessed by the original no longer exists. The world these characters inhabit feels severely limited and artificial. That being said, these characters lack any discernible development and even if there is some limited attempt to shoehorn it into the plot, once again it feels forced and contrived rather than natural and believable. The result is that several moments in the movie feel rushed and not nearly as dramatically powerful as they should be or as the movie thinks they are. By the time we reach the ending the plot, despite being identical to the original on paper, descends into a laughable mess of contrived plot devices and melodramatic clichés. This is not a problem in the original as it used its epic run time to establish each plot point, bring forward these revelations through subtle nuances and bring them to fruition at the conclusion naturally. But that’s not how we do things in 2016 apparently.

It is not just the running time either, by drastically scaling down the world of the film by removing interesting side characters and set pieces the movie as a whole feels much smaller and not nearly as grand. The original is the definitive epic film, while you would struggle to call this version an epic in any sense of the word. Not only that but it never adds anything new. If you think I’m comparing this movie too much to the original can I remind you that the film is called ‘Ben-Hur’? If they wanted to be viewed as their own entity why nor call the film something else while basing it off of the same novel, like ‘A Tale of Christ’ or ‘The Chariot Race’ or something to give some evidence to suggest that this is not simply another attempt to invoke name recognition as a cynical cash grab.


But back to the point I was making, ‘Ben-Hur’ does nothing to improve upon the original. To tie back to my earlier statement about recognition the film devotes so much time to its version of the famed chariot scene that it could be seen as a last ditch attempt to remind the audience they are watching ‘Ben-Hur’. It plays out almost identically to the 1958 version but with the additions of CGI and shaky cam. It isn’t helped by the lifeless lead performance by Jack Huston as it lacks any charisma or sense of empathy. None of the other cast fare any better, with Morgan Freeman having such a thinly conceived character it’s difficult to not just refer to his role as the role of Morgan Freeman, while Toby Kebbell lacks the necessary intimidation to make a threatening villain.


But as I said earlier there is a certain aspect of this film that makes it feel particularly cynical, even for a remake of such a classic film. ‘Ben-Hur’ was not made out of a passion for this story or a desire to reimagine it. The main characters are simply a vehicle so we can receive another pandering message retelling to story of Jesus. The film has actually been marketed as such, pandering straight to modern Christian audiences. So what’s the harm in that you ask? One notable aspect missing from this version are the homosexual undertones from the original (these undertones were confirmed several times as an intentional inclusion by writer Gore Vidal). These undertones had to remain subtle in 1958 in order to sneak past the stringent censors. But with a more accepting and lenient society, surely what could only be alluded to in 1958 could be explicitly explored in 2016? Unless of course your main objective was to target conservative religious audiences who may take issue with any homosexual themes within their movies about Jesus. Just maybe.


Uninspired and unmotivated, the ‘Ben-Hur’ remake, while competently made, falls flat on every level when compared to the original.