Pirates of the Caribbean: Dead Men Tell No Tales

"The dead have taken command of the sea. Searching for a girl, a pearl and a Sparrow."

I don’t know what it’s like for everyone else, but nostalgia really sucks don’t you think? I mean you can be completely and utterly accepting that something is not that good on an objective level but they make one quick mention of something you remember fondly from your childhood and you can’t stop watching even though you want to. That basically applies to me when it comes to this franchise. The first ‘Pirates of the Caribbean’ is something that I remember fondly from my childhood and something that still holds up decently to this day. I wish I could say the same for the sequels.


Thrust into an all-new adventure, a down-on-his-luck Captain Jack Sparrow (Johnny Depp) feels the winds of ill-fortune blowing even more strongly when deadly ghost sailors led by his old nemesis, the evil Captain Salazar (Javier Bardem), escape from the Devil's Triangle. Jack's only hope of survival lies in seeking out the legendary Trident of Poseidon, but to find it, he must forge an uneasy alliance with a brilliant and beautiful astronomer and a headstrong young man in the British navy.


So this is apparently ‘Pirates of the Caribbean: Dead Men Tell No Tales’ (or ‘Salazar’s Revenge’ in some areas because apparently Disney thought it wasn’t ridiculous enough already) is a thing that exists and I am therefore obligated to review it. That being said the last instalment turned a hefty profit so I suppose in that regard it does make sense to continue the franchise, but said last film was so utterly bland and devoid of anything remotely memorable that the whole franchise just feels like more of an exercise in futility than ever. This instalment is, by some baffling oddity, even more forgetful and pointless.


That is actually somewhat disappointing, especially given that a whole new creative team was drafted to direct this new instalment after Gore Verbinski directed the first three and Rob Marshall helmed the lacklustre fourth. The directors this time around are Joachim Ronning and Espen Sandberg, the due behind the impressive 2012 Norwegian film ‘Kon-Tiki’. The direction itself on ‘Dead Men Tell No Tales’ is mostly competent and sometimes notable but to be honest that was never really the problem with this franchise. All of them have been solidly directed, what has plagued them and continues to do so is a complete lack of tonal consistency. The film tries to balance drama, comedy and adventure which is far from impossible but in this case the film only seems capable of conveying one mood in any one scene, meaning that going from scene to scene is frustratingly jarring in tone. 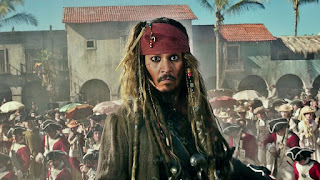 Like the other sequels as well there is no clear narrative thrust to be found for a majority of ‘Dead Men Tell No Tales’. It’s just one magical McGuffin, one meaningless backstory, another motivation, some special curse, a revenge plot, a flashback and son on until you realise there’s been no cohesive underline to this story and we’re already halfway through the movie. When the plot of sorts finally does kick in I’m not invested enough within the characters to even care. Which brings me to another problem, as in the problem that I just mentioned. While the characters from ‘Curse of the Black Pearl’ weren’t exactly complex you could understand their motivation and were therefore sympathetic towards them. That just isn’t the same here, everyone just kind of goes where the script tells them to without much rhyme or reason.


Of course, ‘Dead Men Tell No Tales’ actually reintroduces the characters played by Orlando Bloom and Keira Knightly having not seen them since ‘At World’s End’ and I must admit I personally got a nostalgic kick out of seeing them on screen in these roles again, albeit very briefly. I also found myself surprised at how much I enjoyed just being within this world again. Even though the mythology of this franchise is convoluted beyond reason the feel and atmosphere of it, combined with that terrific theme that still makes almost any scene it’s attached to stand out, was somewhat immersive to see again.


But I think what hurts this movie most of all is the comedy, or should I say the attempts at comedy because they all fall so painfully flat. Everything from the one-liners to the running jokes just feel horribly unfunny and to make matters worse each one contains a pause as if that’s where they thought the audience would be laughing like a bad Adam Sandler film. It’s just awkward and goes nowhere, and as I said before because according to the logic of this movie a scene can’t convey more than one thing at a time you know they have several more minutes of this before we can move on. Bardem could have been interesting but he isn’t given enough to do as part of this franchise’s long running line of undead ship captains out to settle a debt. I don’t think it’s even worth saying that Depp’s performance is infuriatingly shallow, boasting nothing other than a few silly gestures and catchphrases. Again, this would be acceptable if like in the first movie he was part of an ensemble, but here he’s still pushed as a main character and it’s still awful.


Repetitive and derivative of its own predecessors, ‘Dead men Tell No Tales’ makes the franchise feel more stagnant than ever.