Guardians of the Galaxy Volume 2 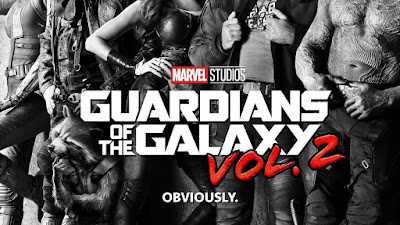 "We're gonna have to jack up put prices for two time galaxy savers."

Few films have ever surprised me in the same way that ‘Guardians of the Galaxy’ did back in 2014.  Going in with no expectations, no knowledge of the characters and a poster that gave me worrying vibes of ‘Masters of the Universe’ the way James Gunn injected his unique sensibilities into the movie to make it a unique and hugely entertaining movie was extraordinary. It still adhered to the Marvel formula, but its sensibilities and style were on another realm entirely. Oh, and now there’s a sequel.


Peter Quill (Chris Pratt) and his fellow Guardians are hired by a powerful alien race, the Sovereign, to protect their precious batteries from invaders. When it is discovered that Rocket (Bradley Cooper) has stolen the items they were sent to guard, the Sovereign dispatch their armada to search for vengeance. As the Guardians try to escape, the mystery of Peter's parentage is revealed.


It was always going to be a tough task for ‘Guardians of the Galaxy Volume 2’ to recapture the brilliance of the first movie, especially when so many sequels have the unfortunate habit of upping the scale while reducing the quality. But leave it to James Gunn to do almost the exact reversal of that. Gunn is able to keep the focus of this movie exactly where it should be, on the characters. The endearing, memorable and oddly profound characters that made the first film so memorable are not only explored to an even greater degree here that provides them with an added sense of depth, but they are just as entertaining as they were upon their first outing.


Compared to the planet hopping antics of the 2014 film, Volume 2 seems a little more restrained. Obviously that is not a word one would usually associate with a movie such as this, and compared to most films in cinemas right now this is still an action extravaganza filled to the brim with CGI and elaborate set design. But in a world where so many sequels put aside the intimacy of the original in favour of escalation it was highly refreshing to see Gunn keep the focus on his characters. If anything Volume 2 feels even more personal than the first.


This is all the more remarkable given the MCU’s tendency to drop the ball when it comes to direct sequels. ‘Iron Man 2’ and ‘Thor: The Dark World’ are certainly amongst the lower tier of Marvel’s efforts and ‘Age of Ultron’ still felt like a step down from the first. They all suffer from prioritising the exposition necessary to expand their universe above crafting a character based story. But here Gunn has been given the freedom to completely side step that issue. It feels as if there are no rules imposed on him concerning what he has to include or introduce. He is simply taking the characters on their next thematic step and the only elements he is introducing are those that feel necessary to do just that.


Given that Gunn has such a talent for character work it’s no surprise that he uses the opportunity to dig deeper beneath the characters we have come to know and love. Their dynamic and personal issues are explored on a much deeper level that not only further informs the motivation behind each characters actions and personality, but leads to some cathartic moments when those characters are forced to confront those issues. Even secondary characters like Michael Rooker’s Yondu and Karen Gillian’s Nebula are given more time to evolve and to great results. Gunn turns what so easily could have drifted into a collection of caricatures into fully realised individuals that work just as well when apart as they do as a team.

But Gunn’s other great talent here is his ability to blend moods and tone. Rather than splitting the movie to a point where the action, drama and comedy feel like separate entities, Gunn blends them all together to a point where they reinforce one another as the narrative moves forwards. I think it says a lot that his first action sequenced is to the sound of Electric Light Orchestra’s Mr Blue Sky and his climactic one is to Fleetwood Mac’s The Chain. The film never takes itself too seriously but at no point does it feel uninterested with its own drama either. Furthermore Gunn also puts his skills as a director to good use, his attention to detail and visual pulse means that even when his narrative and action scenes become a little too crowded you can still keep track of where everyone is.


The cast seem to be on the exact same page as well. Chris Pratt is such an engaging presence with his likability and endless stream of humour that a scene with him never feels dull. On the occasion when he isn’t in the scene though you have the likes of Cooper as Rocket, Rooker as Yondu, Saldana as Gamora or Dave Batista who once again shows such brilliant comedic promise that you can forgive Drax for the lack of character depth. Then there is the always enigmatic Kurt Russel, who despite being loaded with a weight if exposition is always charismatic enough to keep our attention.


As for flaws I can draw some noticeable ones. Structurally the movie feels a little too loose, with some set pieces feeling somewhat uninvolved with the main story. With the movie introducing a plethora of characters and plot threads early on the first act can come across as a little disorienting and then towards the end the narrative seems to overtake the characters slightly as it rushes forwards towards a conclusion. But Volume 2 is just such good fun that I find those flaws easy to overlook, that is not to say they don’t exist but they don’t get in the way of what the film promised and aimed to be which is simply great entertainment.


An immensely fun, action packed and visually spectacular blast with a surprising amount of poignancy.