"Hear that? It's Nothing. No birds, no animals, nothing."

If there is any movie in recent memory that I think had the potential to be a true masterpiece but was let down by a few core elements, it was ‘Prometheus’. It mixes great filmmaking with bad writing like oil and water. Striking visuals, intelligent concepts that are not spoon fed to you, impeccable design, strong ensemble cast and terrific direction (it’s Ridley Scott, what would you expect?). But all of that is marred by flat and uninteresting characters, completely inconsistent plot elements and irrational behaviour from pretty much everyone involved. In going from a story to a script the greatness was lost. That brings us to ‘Alien: Covenant’.


Bound for a remote planet on the far side of the galaxy, members of the colony ship Covenant make a detour to an uncharted planet and upon landing there discover what they think to be a paradise. The mysterious world soon turns dark and dangerous when a hostile alien life-form forces the crew into a deadly fight for survival.


This might not count for much given that every film in the ‘Alien’ franchise since 1986 has been disappointing to outright awful but ‘Alien: Covenant’ is certainly the third best film of the franchise. It sits a long way ahead of the likes of ‘Alien: Resurrection’ and ‘Alien 3’ but at the same time is still long way behind ‘Alien’ and ‘Aliens. Yes, if I had to group it with another film from the franchise it would be ‘Prometheus’ but fear not, because by going back to basics ‘Alien: Covenant’ keeps a tighter focus on its story that allows its themes to feel naturally integrated if still not fully explored. Furthermore the characters within this film actually feel like something vaguely relating to a rational human being. Regrettably there are still a few idiotic character moments that are a highly distracting (surely there’s only so many times a character can stick their face directly above a pulsating alien embryo that will subsequently allow said embryo to attach a lethal Face-hugger to said face before it’s just issued as a general warning).


What is most surprising about ‘Alien: Covenant’ is that it actually raises concepts that have more in common with ‘Blade Runner’ than Scott’s original ‘Alien’. While it is certainly something we’ve seen explored elsewhere and to a greater degree it is intriguing to see them brought together here. In fact it leads me to say that the title of the movie is somewhat misleading, as despite the fact that Xenomorphs are a major thematic crux within the film they’re certainly not at the centre of its thematic conceit. In fact that in itself does result in a personal issue I have with the movie that I’m not sure whether or not to call an objective flaw so I’ll address it later.


Like essentially any film he directs, far and away the best thing about ‘Alien: Covenant’ is Ridley Scott’s direction. He possesses such an eye for visually stunning compositions that even the most comparatively mundane moments feel epic in his hands. Not only that but when Scott wants to instil a mood throughout a movie you can bet he will do just that, with an unnatural eeriness penetrating every frame and evoking a sense of unease. The sound design and cinematography also enforce this mood brilliantly, to such an extent that my only issue with the film on a technical level comes from the overabundance of CGI. Not that it isn’t used well on some occasions but I feel that more than once the genuine weight and presence of a practical effect would have suited the scene better. 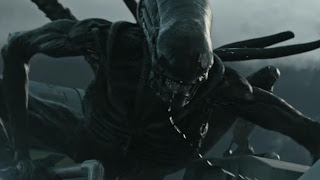 The cast are also on very strong form here. Katherine Waterston’s performance and character may feel overly reminiscent of Ripley (is it that hard to come up with a different kind of character?) but as a protagonist she’s suitably capable, as is Billy Crudup and the rest of the Covenant Crew. The two standouts are in fact Danny McBride, whose performance is so convincingly different from anything the actor has done prior to this that it is actually remarkable, and Michael Fassbender whose nuance and brilliance never fails to shine and without spoiling anything (or at least anything that you could already see in some stupid studio synopsis anyway) that talent is put to great use here.


I suppose the biggest criticism I have of ‘Alien: Covenant’ is also its’ biggest strength, or at least what a majority of people are also praising it for. It feels a little too reminiscent of previous entries in the ‘Alien’ franchise to a point where it sometimes feels like it’s pandering to its audience. Of course, sequels have taken influence from their predecessors before, especially on a narrative level. But where they did something new and interesting with the characters or environment, ‘Alien: Covenant’ doesn’t seem to have enough interest in its own characters, who themselves are still fairly uninteresting for the most part. As a huge fan of what Scott achieved with that original film I will revel in anything that feels like a return to that style, but this movie almost seems to get stuck there.


Which leads me back to the point I avoided discussing earlier. You see, as much as I enjoy revisiting Scott’s ‘Alien’ world I can’t help but think this movie and its intended sequels are focussing on the least interesting part of ‘Alien’. As interesting as the origins of the Xenomorph might be, what made that first film great was the human element. I feel as if the longer this series goes on the more it risks actually undermining the original film. So as great as it may be to return to this universe in the short term, in the long run it might do more harm than good.


Effectively chilling and technically masterful, Scott’s return to the ‘Alien’ franchise may be a little static but it is certainly entertaining to those looking for some classic ‘Alien’ thrills. But I fear that simply isn't good enough.