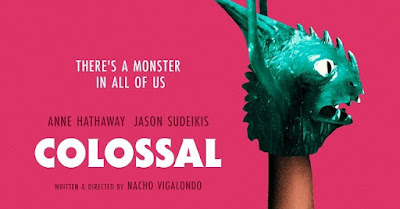 "Feel that tingle? When you know you're watching something that's gonna change the course of history."

As odd as it may seem, monster movies were once a force for political weight and deep resonance. The original ‘Godzilla’ from 1954 was more than just a giant lizard smashing things, it was an expression of Japan’s post war fears of nuclear weapons. Whereas Japanese productions have continued to display this line of thinking with the most recent ‘Shin Godzilla’ being a metaphor for government inefficiency, western monster movies seem far more interested in the creatures than what they represent.


Gloria (Anne Hathaway) is an unemployed writer struggling with alcoholism. Her errant behaviour prompts her frustrated boyfriend Tim (Dan Stevens) to break up with her and kick her out of their New York City apartment, forcing her to move back to her home town in an effort to sort her life out. 6000 miles away a giant monster materialises in Seoul, South Korea and leaves death and destruction in its wake. The two events seem oddly connected.


I always appreciate stories with ambition to them, as well as those who rely on the intimate. Anything that can merge the two while also being an original property and an interesting blend of genre, adding a layer of complexity and being downright entertaining at the same time should all be a recipe for brilliance. By all indications ‘Colossal’ is a movie I should adore, but while I certainly liked it, the film was not the tour de force it could have been. As I said though its premise is terrific and one I won’t give any further detail on at risk of spoiling it as the trailers did. It not only establishes a completely unique concept but melds the two ideas together so brilliantly that each aspect goes hand in hand. The tone, mood and style of writing allows the conflicting storylines to blend together excellently, never making the transition from one to the other feel jarring or out of place.


However one of the problems arises from the fact that the movie seems to over explain its central conceit. Maybe this is just personal preference but I was perfectly happy with the ideas the movie was brining to the table without any specific reason for them. I can understand a need to provide some reasoning for said events but when the origin is revealed it feels completely unnecessary, adding nothing to the plot, characters of central themes of the movie. In fact there are a few scenes that have that effect. While on the whole the movie is structured excellently there are one or two scenes throughout that disrupt that, adding elements that are never addressed again or simply not being as compelling as the rest of the movie.


Luckily though, most of that is kept in check by the terrific performance being given by Anne Hathaway. She has played characters struggling with addiction before such as ‘Rachel Getting Married’ (shout to the late, great Jonathan Demme while we’re at it) but within ‘Colossal’ she is able to balance an acute sense of humour with the heavier dramatic moments. Like the film around her Hathaway does a superb job of balancing tone and mood, never taking a misstep in conveying a multi-layered character battling her own internal demons. 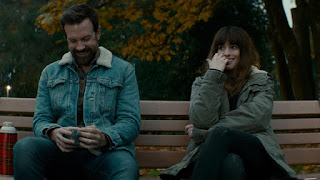 The supporting cast such as Dan Stevens and Jason Sudekis also fill their roles nicely. The problem however, lies with the characters they are portraying. As Gloria’s ex-boyfriend Stevens’ role feels more obligatory as the movie goes on and his presence starts to feel unnecessary. Then there’s Sudekis as Gloria’s childhood friend with whom she reunites with upon returning to her home town. While there is nothing inherently wrong with any one scene he is in Sudekis’ character feels so inconsistent in his actions, motivations and entire personality that it becomes annoyingly distracting. While his progression is not beyond the realm of believability it feels as if there is a whole sequence missing in which is transformation is explained or at least foreshadowed. Even if his behaviour in the latter half of the movie is examined it feels so wildly different from what he was introduced as that it’s hard to escape the feeling that he was changed to be whatever the script wanted him to be.


As well as that, despite having a very limited cast there are still a number of roles that feel redundant to the movie as a whole. In essence the movie is about Hathaway and Sudekis so why is so much time devoted to these secondary characters with no depth and no purpose in the plot. It’s one of the reasons why the film ultimately feels much longer than what it actually is.


Despite all this though I still feel as if I’m being overly harsh on ‘Colossal’. Writer and director Nacho Vigalondo has not only created a story of grand ambition and poignant intimacy but he has blended the two together brilliantly. Small scale drama and giant kaiju movies are not genres that one would associate together but his sharp screenplay and focussed direction keeps the tone and style of the movie on track at all times. It is a strong character study underpinned by some larger than life concepts.


An imperfect but highly admirable, as well as enjoyable, piece of genre filmmaking underpinned by some unique human drama.